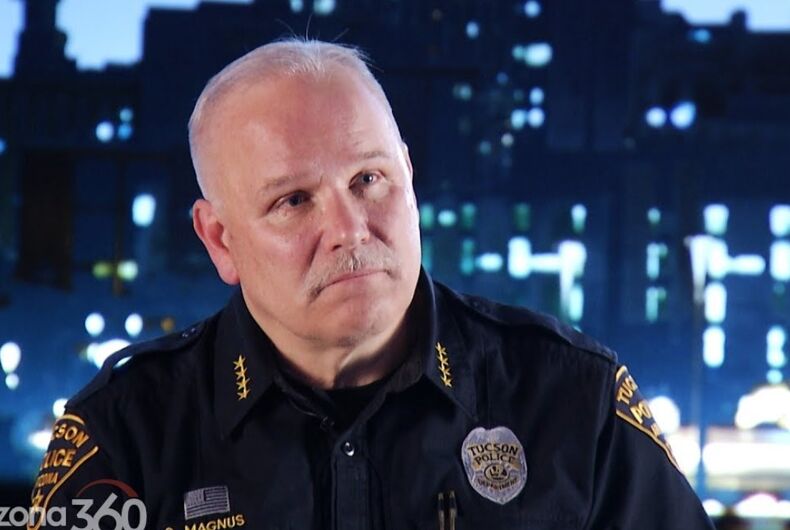 President Joe Biden has nominated the police chief who is believed to be the first gay police chief to get married in the U.S. to lead Customs and Border Protection (CBP).

Tucson, Arizona Police Chief Chris Magnus made national headlines for his support for the Black Lives Matter movement and for his criticisms of former President Donald Trump’s immigration policies. Biden’s choice of Magnus to be the next Commissioner of CBP signals his intent on changing the culture of the sprawling agency charged with enforcing trade, customs, and immigration laws.

Magnus was police chief in Richmond, California from 2006 to 2015. During his tenure, he was credited with hiring more women and minorities, increasing communication between the police and the community, and increasing police accountability.

By the time he went on to be the police chief of Tucson, 60 percent of the Richmond Police Department’s active police officers were non-white, and almost all the officers who were there when he started had left.

He also made headlines a few times when he was in Richmond. He married Terrance Cheung, the chief of staff to the mayor of Richmond in 2014, and the two were dubbed “the city’s power couple.”

Magnus was the first known police chief to take advantage of marriage equality, and he and Cheung moved to Tucson together in 2016.

Magnus also got attention for a picture of him holding a Black Lives Matter sign in 2014 during the protests of the police killing of Michael Brown in Ferguson, Missouri.

“We support people’s rights to peacefully protest. We have a lot of respect for all lives in our community, Black, brown, everyone,” he told Richmond Confidential at the time. “Our goal is to promote and build the strongest relationships possible between the police and the community.”

But it’s his time as Tucson Police Chief that is drawing the most attention now. Richmond, California is in the Bay Area and is far from the border, but Tucson is much closer, putting him at odds with the Trump administration on immigration law.

In March 2017, the Tucson Police Department refused to help Border Patrol capture an escaped detainee who allegedly crossed the border illegally, and they even evicted a task force set up to find the suspect from the police department.

The Observer reported that this led to bad blood between the law enforcement agencies and “homophobic language in their private comments” from Border Patrol officers on an online forum.

Later that year, he wrote a New York Times op-ed denouncing the Trump administration’s efforts to increase deportations, saying that it made it harder to enforce the law when witnesses and victims are afraid to talk to police.

“The harsh anti-immigrant rhetoric and [Attorney General Jeff] Sessions’s reckless policies ignore a basic reality known by most good cops and prosecutors,”  he wrote. “If people are afraid of the police, if they fear they may become separated from their families or harshly interrogated based on their immigration status, they won’t report crimes or come forward as witnesses.”

“It’s a simple formula. When crimes go unreported and unsolved, criminals are empowered.”

The Biden administration mentioned his time in Tucson in their brief announcement of his appointment.

“In Tucson, Magnus implemented de-escalation training, sentinel event review processes, and programs to promote officer health and wellness,” the White House said in a statement. “Because of Tucson’s proximity to the border, he has extensive experience in addressing immigration issues.”

Just after his nomination was announced, Magnus said that he wants to talk to senators and border patrol agents before he discusses policy changes for the border.

“Sometimes it’s frustrating how hyperpartisan all these issues can become, but I want to say from the very start, I am no ideologue and I do want to make a difference on things,” he told the New York Times on Monday.

Three officers also resigned in connection to Ingram-Lopez’s death, and Magnus said that he would have fired them if they didn’t resign.

What does the Bible say about “traditional marriage values” anyway?