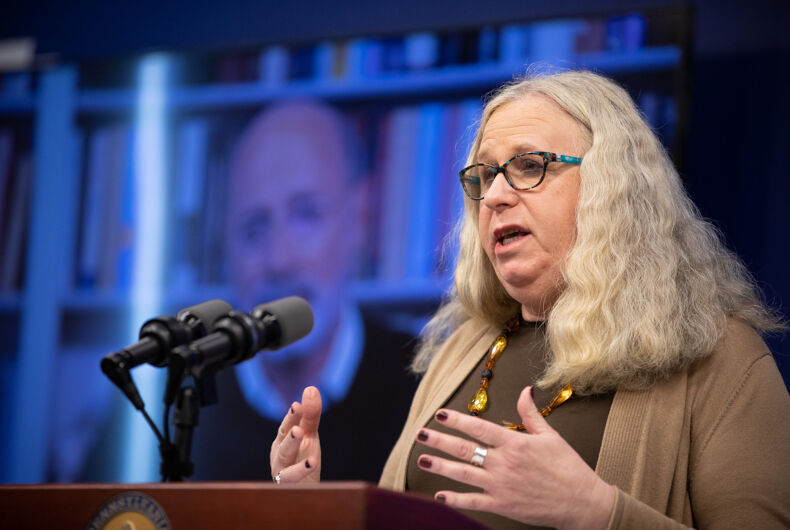 Dr. Rachel Levine, the first openly transgender person to be confirmed to a federal position by the United States Senate, is speaking out on the effort by state lawmakers to take away healthcare and the ability to participate in sports for trans youth.

In her first interview since being confirmed as the Assistant Secretary of Health last week, she calls the efforts “challenging to see.”

Last week, Arkansas’ legislature has banned gender-affirming healthcare from even being offered to people under the age of 18, and pending Gov. Asa Hutchinson’s signature, would become the first state to do so. In terms of bans on trans youth participating in sports, various bans have passed Republican-majority legislatures in Arkansas, South Dakota, Mississippi and Tennessee this year alone.

All except South Dakota had their bills signed into law last month by their state’s Republican governors. Instead, South Dakota Gov. Kristi Noem (R) signed executive orders to the same effect, as she was dissatisfied with the legislature-approved ban.

Citing her experience as a pediatrician and leading the health department of Pennsylvania, Levine expressed her opposition to these efforts.

“I really think that the decisions about health care for LGBTQ youth are really between the family, the child, the young person, their doctor, maybe their therapist,” Levine said on NPR’s “All Things Considered.”

“We have made so much progress, but we still have a long way to go. And I think it’s really challenging to see state legislators and certain governors targeting LGBTQ people, particularly vulnerable transgender youth,” she also said.

Asked if she was concerned about her comments being considered political, Levine expressed she did not.

“I don’t see it as a political issue at all. I view this as a health equity issue,” she said. “This is about fairness and equality and about specifically health equity, which is part of my portfolio. So I don’t see any risk in terms of politicization of this issue.”

She echoes Vice President Kamala Harris, saying, “[As the vice president] has said, ‘I may the the first but I’m not going to be the last.’ But I know this is new for many people…

“I like to quote that sage Yoda from Star Wars,” she added. “You know, ‘Fear is the path that leads to the dark side. Fear leads to anger. Anger leads to hate. Hate leads to suffering.’ I think that people fear what they don’t understand.”

Asked about the progress in controlling the ongoing spread of coronavirus, Levine said she is “concerned.”

“You know, we are getting closer and closer, but we’re not done yet. We have to stay the course, and that’s why it’s so necessary to take the mitigation measures very, very seriously,” she said.

Levine also encouraged individuals to enroll in healthcare under the Affordable Healthcare Act while the enrollment window remains open.

"@POTUS ran on the promise to bring down health care costs for families and with the American Rescue Plan, he’s delivered […] Please, go to https://t.co/1ImbKzjVpk and sign up!"

"I like to quote that sage Yoda from Star Wars. You know, 'Fear is the path that leads to the dark side. Fear leads to anger. Anger leads to hate. Hate leads to suffering.' I think that people fear what they don't understand," Dr. Levin tells @arishapiro. https://t.co/3aq9dH6tHv

Her comments on concerted anti-trans efforts from lawmakers echoes what she said in an interview with LGBTQ Nation in response to bigotry she faced while leading Pennsylvania’s response to COVID-19.

“I think that we need to continue to educate people about LGBTQ individuals,” she told LGBTQ Nation in August. “We need people to continue to work on changing that harassment and discrimination that LGBTQ individuals face, and one way to do that is through education and advocacy. So I think if someone apologizes, it is incumbent upon them to advocate for the LGBTQ community.”

Levine was confirmed in a bipartisan Senate vote to be assistant secretary of health at the Department of Health and Human Services (HHS) on March 24, making her historic nomination successful has now also earned her the distinction of being the first transgender federal official to be confirmed.

This morning, Dr. Rachel L. Levine was sworn in by @SecBecerra as the 17th @HHS_ASH. Watch her welcoming remarks: https://t.co/r3lyG4WBnG pic.twitter.com/rw8GvTbFZR

Honored to be sworn in as @HHS_ASH. Immediate focus is to help get #COVID19 under control & address the underlying issues it brought to the surface from health inequities to mental health & opioid abuse, it’s time to help America build a healthier future! pic.twitter.com/DYIXurYjOC

While she was confirmed three times by the GOP-controlled state senate during her tenure at Pennsylvania’s Department of Health, she faced an unprecedented deluge of transphobic attacks as she tried to get Pennsylvanians to wear masks and practice social distancing.

In January, members of the Pennsylvania state legislature began calling for a formal reprimand of state Rep. Jeff Pyle (R) for mocking Dr. Levine in a social media post. Pyle posted a meme that misgendered Dr. Levine and mockingly compared her to “Benjamin Franklin.”