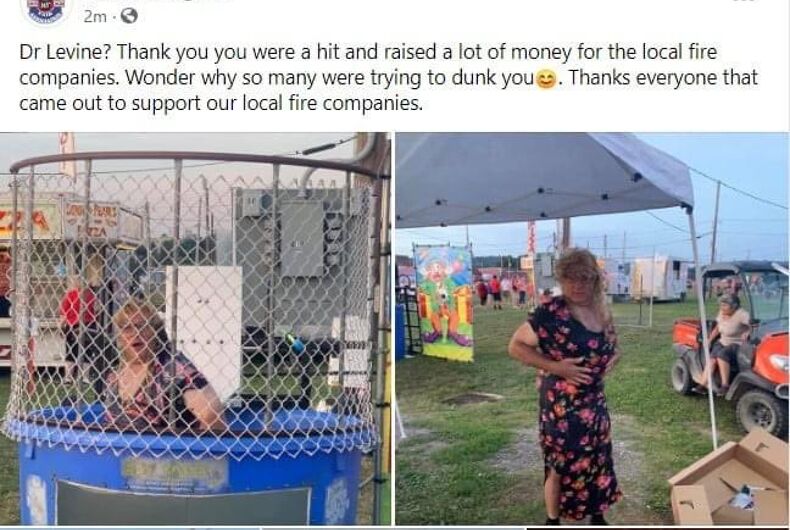 A county fair is facing criticism for mocking the state’s top doctor, Physician General Rachel Levine, with an image of a man in a dress. Levine is a transgender woman.

The people behind the Bloomsburg Fair in eastern Pennsylvania posted a picture to Facebook this past weekend of a man in a blond wig, dress, and glasses, who was working the dunk tank.

“Dr. Levine?” said the caption in the Bloomsburg Fair Association’s post. “Thank you you were a hit and raised a lot of money for the local fire companies. Wonder why so many were trying to dunk you.”

The post was quickly criticized for being transphobic on Facebook and state elected officials even condemned it, and the fair association took it down.

Dr. Levine is an honorable public servant whose tireless work to keep PA safe and healthy has saved countless lives. She is owed an apology. https://t.co/VMzwuDn6Ue

Out state Rep. Brian Sims (D) said he was “disgusted” by the fair’s attack on Dr. Levine.

BLOOMSBURG: As an extremely proud @BloomsburgU alum, and as someone who truly loves the Town of Bloomsburg, I can’t begin to say how disgusted I am with the transphobia that occurred at, and was subsequently promoted by, the @BloomsburgFair today.
1/5 pic.twitter.com/j4U3ZROp0h

In a statement, Bloomsburg Fair President Randy Karschner played coy and said that putting a man in a dress to represent a transgender woman had nothing to do with transphobia.

“A fellow dressed up in a dress to get people to throw balls at the dunk tank to raise money,” Karschner said. “It turned into where people thought we were offending Dr. Rachel Levine, and that was no intention at all.”

Main Township Fire Chief David Broadt was later identified as the man in the picture and he said, “It was just in fun. It wasn’t done to disrespect her.”

Dr. Levine has been a lightning rod for criticism from the right in the state because she leads the Pennsylvania Department of Health and has been a visible advocate of coronavirus prevention measures like wearing masks and social distancing.

In June, Trafford Borough Councilman Zack Cole posted a message on Facebook that said, “Happy Father’s Day to [deadname] Levine.” He later wrote that he posted that message because he was “angry I have been refused service for not wearing a mask, even though many sources say masks are unnecessary.”

Scott Township Commissioner Paul Abel made anti-transgender comments about her in a council meeting held on Zoom on June 9 while discussing restrictions for the municipal pool.

“I tell you, I am tired of listening to a guy dressed up like a woman,” he said.

He later resigned “for his wife and family.”