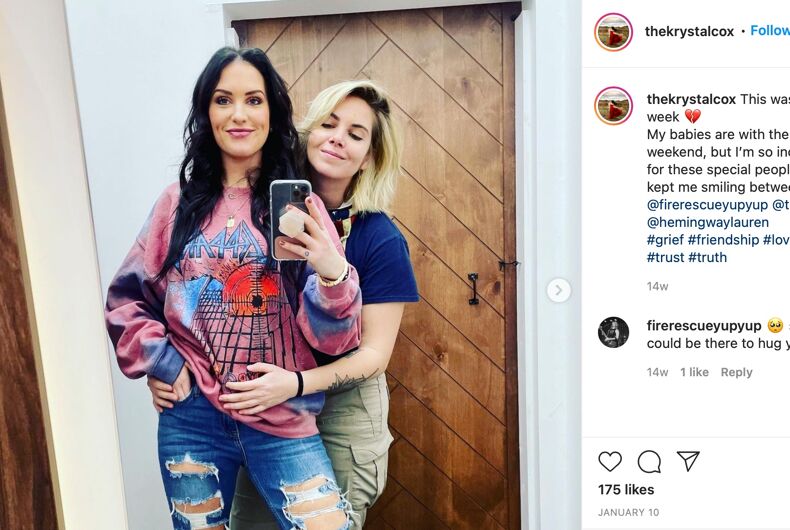 Krystal Cox and her girlfriend pose for a selfiePhoto: Instagram

The elders of Atlanta’s Woodstock Church of Christ have abandoned their namesake’s teachings in favor of the opposite of what he taught.

The four men sent a letter to a lesbian parishioner to say they would “no longer treat you as a sister in Christ” if she didn’t somehow become straight and warning her that if the men “withdraw fellowship” that “Christians must not interact with you.”

“Well when I opened it, I was kind of enraged. Like, why am I getting picked on and getting called out when everyone has sin?” hairdresser Krystal Cox told the local CBS station.

“The fact that they’re going to point it out and release my personal business to the entire congregation of the church and tell them that I can no longer come there I just don’t feel like that’s right.”

In the letter that flatly blames Cox for their own actions, the men say, “this is an effort to encourage in you a Godly sorrow leading to repentance.” That’s the churchy way of saying, we intend for this letter to hurt you.

“This greatly saddens us because while we can no longer fellowship you as a sister, we do care for your soul,” they write.

They go on to say that they will announce to the congregation that she is being thrown out of the church because she is a lesbian and will instruct them to shun her.

“Your name will be removed from our membership role until you decide to make your life right with the Lord,” they write. “It is important that you understand after fellowship has been withdrawn from you, Christians must not interact with you except to encourage you to repent and seek forgiveness.”

Nowhere in the Bible does Christ condemn homosexuality; in the New Testament the apostle Paul, who never met Christ, says gay people should be executed, endorses slavery, and encourages Christians to treat women unequally.

Christ, however, instructed his followers to welcome social outcasts, love unconditionally, and treat everyone with generosity. He specifically condemned those who followed old religious rules created by men with more vigor than they showed compassion for others.

The men have all hidden from the media, refusing to answer for their hateful actions. The church has taken down their website and social media accounts after national outrage over their ugly treatment of the woman.

The elder’s letter points out that they had sent the woman a previous letter to chastise her for starting a relationship with a woman.