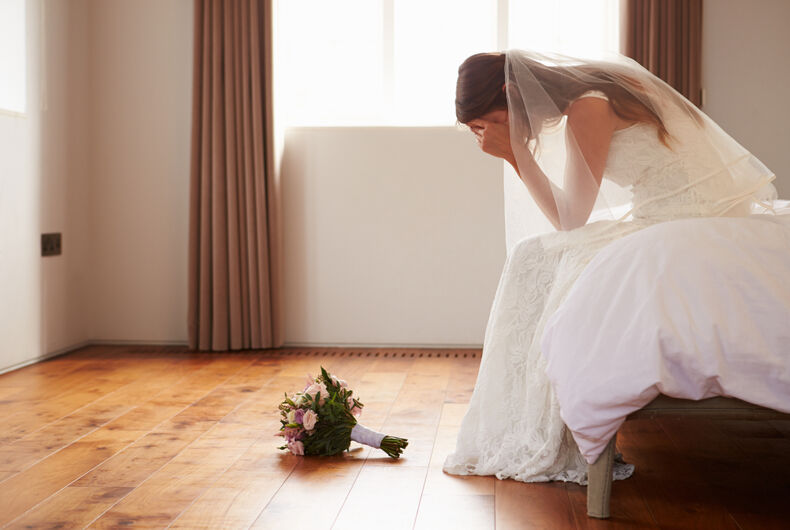 A videographer walked out of a lesbian couple’s wedding when he noticed that they are a same-sex couple, citing “his faith” as his excuse for cruelly ruining the wedding.

“All I know is our happiness on our special day has forever been stolen from us,” Clarissa Teegan wrote on Facebook about the humiliating experience. “Out of town guests, dear family and friends were unable to attend our wedding due to COVID-19, they were heartbroken that they couldn’t come to the wedding in the first place and then heartbroken once again when they found out there would be no video.”

Clarissa and her wife Teegan Templeton said in an interview with Insider that they worked two jobs in order to afford their dream wedding at a farm in North Carolina, something that they’ve been planning for 14 months.

The couple wanted the day to be perfect and they booked a videographer through Tolman Media, an international company, in June 2020 for their April 2021 wedding. They signed a contract with the company’s South Carolina branch and the videographer Seth Curl emailed them to get to know them a month before the wedding. According to a post on Clarissa’s Facebook page, they paid $1086.

It didn’t seem like there would be a problem. Teegan said that she saw Curl at the venue when she showed up in the morning, so everything appeared to be fine.

But when Teegan walked down the aisle, Clarissa couldn’t see Curl at all in the crowd.

“I had a mini panic attack. I started to panic in my head and told myself maybe he ran to the car or had some technical difficulty,” Clarissa said.

After the ceremony, she asked the photographer where the videographer was, since he still wasn’t there.

“She stood there and said, ‘He left,’ and I could hear the pain in her voice,” Clarissa said.

Their wedding planner called the videographer to find out where he is, and he told her over the phone that he left because “of his faith and that he didn’t feel comfortable because it’s a same-sex marriage.”

The planner then called Tolman Media, who told her that they were “sending another videographer out immediately” to “cover what he could,” but the new videographer showed up hours later.

“I felt terrible, heartbroken, and like my heart was ripped out of my chest,” Clarissa said, explaining that she and her wife “faked it” to get through the pictures.

“We didn’t even eat at our own reception. I honestly wanted the entire day to be over. I didn’t want to be there anymore, and neither did Teegan.”

After the wedding, Tolman reimbursed the women and said that they fired Curl. They also promised to adopt a non-discrimination policy.

But that still leaves the question of why Curl waited until the day of the wedding to walk out instead of at least telling them in advance that he’s homophobic.

According to Clarissa, he was aware that she and her wife are a same-sex couple and “his actions were intentional.” He’s not answering media requests for comment.

The women said that they’re speaking out because no one should have to go through what they did.

“Same-sex couples should not have to ask if they are willing to do business with them,” Clarissa said, adding that they’re “not the only same-sex couple that is stressed about planning a wedding.”

Tolman Media2ND UPDATE: It has now been brought to my attention that Seth Curl was aware about our sexual orientation…

4 LGBTQ staffers fired from brewpub seeking “a change in culture.” Guess what they meant.