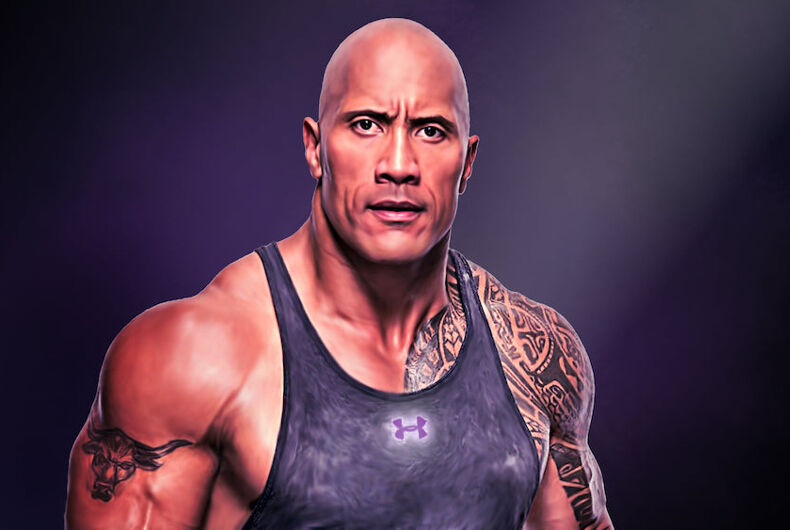 We’ve just gotten past the most traumatic presidential election in modern history, and already there’s a crowd of would-be commanders-in-chief. Most of them are Republican politicians who carry the stain of having served in Donald Trump’s administration: Mike Pompeo, Nikki Haley, and Mike Pence, to name a few.

But then there are the people whose main qualification for the position is fame. Chief among these is Dwayne Johnson, aka The Rock.

A recent poll of questionable value found that 46 percent of those asked said they would consider voting for Johnson if he ran for president. (Piplsay, which conducted the poll, is better known for researching consumer opinion on topics ranging from brand activism to Amazon Go.)

Johnson was quick to tease the poll results, which also floated Angelina Jolie’s and Tom Hanks’ names,  on Instagram.

“I don’t think our Founding Fathers EVER envisioned a six-four, bald, tattooed, half-Black, half-Samoan, tequila drinking, pick-up truck driving, fanny-pack wearing guy joining their club — but if it ever happens it’d be my honor to serve you, the people,” he said.

Johnson is hardly the only celebrity to ponder what it would be like to be president.

While Johnson’s politics are generally unknown, Fox News commentator Tucker Carlson has fashioned himself as the logical heir to Trump. Carlson’s nightly platform makes him a familiar guest in lots of homes, so much so that GOP party regulars think that Carlson may be the next-generation Trump.

With his willingness to traffic in white supremacist tropes, Carlson sure seems Trumpish enough.

With built-in name recognition and presumably deep pockets, celebrities look like natural candidates. Case in point: Oprah Winfrey. Before the Democratic primary season got underway in earnest last year, there was a movement to Draft Oprah to run.

She seemed the perfect counterbalance to Trump, and was viewed as having the same kind of favorable status generally assigned to war heroes. Winfrey ultimately made it clear she wasn’t interested in trading in her media empire for negotiations with Sen. Mitch McConnell (R).

Then there was Kanye West. West ran a shambolic presidential campaign last year that was fed by Republicans hoping he would help Trump by siphoning votes from Biden. The campaign only ended up on the ballots in 12 states, and West got a pitiful 60,000 votes.

Trump traded on his fame from The Apprentice to convinced a minority of voters — but enough to win the Electoral College — that he was a shrewd businessman who could whip the government into shape.

What we got instead was a disengaged, incoherent, hate-filled president who did his best to break democracy.

The few other celebrities who made it into public office haven’t exactly proven themselves to be the reincarnation of George Washington. Arnold Schwarzenegger, who replaced Trump on The Apprentice, had a mixed record as governor of California. Jesse Ventura, a wrestler who was elected governor of Minnesota in 1998, simply gave up after one term, apparently tired of the grind of governing.

The fact of the matter is that running the government requires a different skill set than being famous. A successful president knows the details of policy, the levers to pull to make things happen, and the political boundaries of what can succeed.

Or you can be Ronald Reagan, a mid-rank actor who was the perfect vessel for a rising conservative movement. Reagan had the stage presence, could deliver his lines well and struck all the right patriotic chords.

He was also the man who set the Republican party on the course that ultimately led to Donald Trump. Reagan’s policies harmed those in need, including gay men with AIDS, and he showed a more polite, but not less shocking, version of racism.

In short, as much as he is worshipped, he was in many ways a bad president. But he was good at playing president. Other celebrities should be so lucky.