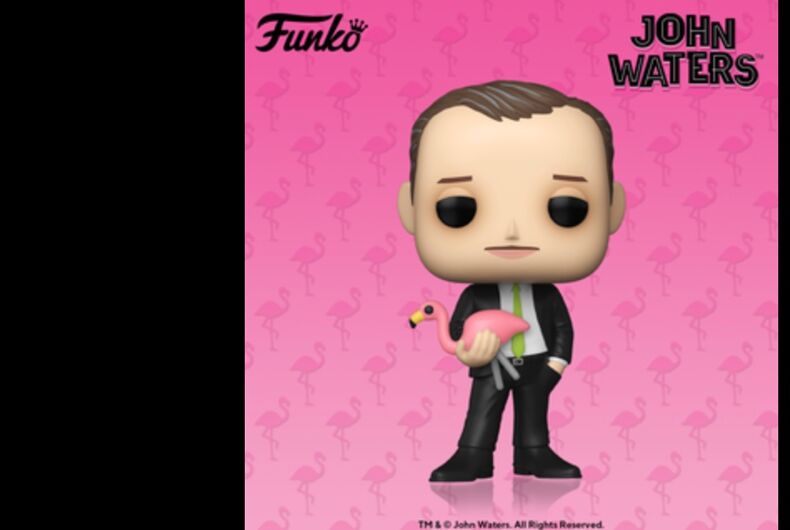 “I’ve always wanted to sell out,” John Waters wrote in his 1986 book Crackpot, “but no one wanted to buy me.”

Now anyone can buy Waters… or at least a mini-version of him, thanks to a new Funko POP! collectible that just came on the market.

Funko, the company known for making bobbleheads and specializing in “pop culture collectibles,” announced this week that it is introducing a vinyl figure of the Baltimore-based writer and filmmaker as part of its Pop! Icons collection.

The company released images of the Funko POP!, depicting Waters wearing a dark suit and holding a pink flamingo, in reference to his 1972 movie Pink Flamingos.

The vinyl figure of Waters is 3¾ inches high, comes in a window display box, and sells for $10.99. Funko will begin taking pre-orders and will start shipping in June. The figures will also be sold in stores that carry Funko collectibles.

Funko started in the 1990s with bobbleheads known as “Wacky Wobblers.” Funko, whose motto is “Everyone is a fan of something,” has created nearly 20,000 different products in dozens of toy lines. The brand is part of the Entertainment Earth network, a California-based retail operation that bills itself as “the premier online destination for the latest and greatest toys, the most exciting action figures, and the coolest gifts and collectibles pop culture has to offer.”

Waters, 74, has been a spokesperson for Nike and a model for Saint Laurent menswear in addition to producing 17 movies, writing nine books, and having a tenth on the way. He said he was honored when his agent came to him with Funko’s idea about making him a collectible.

“You have to be really kind of weirdly well known for it to even be asked, so I was thrilled,” he said. “And you know, I look like a cartoon anyway, so it wasn’t hard for me to imagine it.”

“It’s a very wide-appeal product,” he said. “It’s not an esoteric little company, so I think it has to be pretty mainstream. That’s why it’s so hilarious that I’m one of them.”

The out entertainer joins others to become Funko figures, including characters from franchises in the Marvel Comics, Star Wars, Batman and Harry Potter universes, as well as real life several U.S. presidents, sports figures and entertainers.

He didn’t have to apply or anything, he said.

“You just have to be nuts and make a living from it, I guess.”

Waters, overall, is pleased with his likeness. “I love how it looks… they all look exactly the same. They all have the same shaped head. You can’t be skinny or fat or anything. You just have to have something that is very much representative of who you are, and my mustache obviously got me the job.”

Waters said he initially hesitated about having his figure clutching a pink flamingo.

“The Pink Flamingo thing, I fought at first, because I thought, Oh God, I’m so weary of that,” he said. “But it does instantly identify it, and I completely understand that [what the figure holds] is supposed to be one thing that sums up your entire image. So I think it was pretty wise to put that in there.”

He believed there’s a big difference between a Funko POP! figure and any other action figure.

“I don’t do anything,” he said. “I don’t make a movie or I don’t wet my pants. I don’t puke. I don’t do any of the things a John Waters action figure would do. What it is, it’s more like a bobblehead, although it’s not one. It’s something to put on your twisted curio shelf, I guess, something to watch over you on your desk if you’re trying to create something, maybe.”

The announcement of Waters’ Funko POP! comes after the 27thanniversary of the release of the movie he’s at times called his best, Serial Mom.

But now that Funko has opened to portal to the John Waters universe, can a Funko POP! of his muse Divine be far behind? Is anyone off limits after that — Mink Stole? Edith Massey? The rest of the Dreamlanders? The cast of Hairspray? Lobstora? The Singing Butthole? Dog poop?

Celebrities are already lining up to run for President in 2024. Good luck with that.