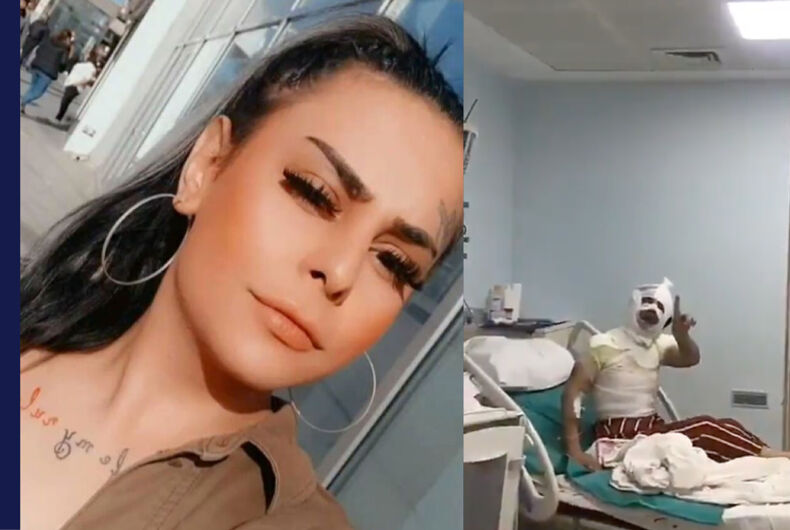 Asya Cevahir before (left) and after the acid attackPhoto: DailyStar

Now she’s in a hospital, covered from the waist-up in bandages, due to the severe injuries. She’s also completely blind in one eye and nearly blind in the other. While the attack has captured the attention of the world, her friends don’t feel safe leaving her side.

Asya Cevahir was leaving her home at around 6:30 P.M. in Istanbul, Turkey, following her birthday on March 9 when the attack happened. She reported that she immediately knew who the culprit was: her ex-boyfriend Emre Bozkurt.

Cevahir had recently broken up with Bozkurt, who threatened to kill her previously.

Despite her allegations, police did not immediately bring Bozkurt in or take him into custody. Friends of Cevahir began putting the word out about the attack, including a video of her struggling to move in her hospital bed, just to show the extent of her injuries.

Cevahir’s attack, along with the hashtag #EmreBozkurtTutuklansın, calling for the alleged suspect’s arrest, began trending.

The Turkish Gendarmerie, a nationwide law enforcement agency and paramilitary force, finally did bring Bozkurt into custody on March 13. He was detained in Eskipazar, miles away from Istanbul, and arraigned in court. He currently remains in custody.

Bozkurt faces charges of “intentional injury by omission,” which calls for a “two thirds” reduced punishment from other “offences against physical integrity,” which critics believe signal the lack of seriousness from law enforcement.

Now, Cevahir is undergoing advanced treatment in a research hospital as she recovers from scarring third-degree burns. Friends have said that several members of the hospital staff have expressed their “disgust” with Cevahir’s identity.

“The defendant who made our friend become like this is arrested for ‘injury.’ But we want him to be tried and punished for ‘attempted murder’,” they added. “This situation makes us very sad but we are very concerned that they won’t treat our friend, so we stay silent.”

Cevahir has been able to talk to her family, but “our friend is so lonely here,” the friends stress.

“Asya is a Syrian woman and she needs more solidarity. We want the man who attacked her to receive the heaviest sentence and to be tried for [attempted] ‘murder’.”

The annual Rainbow Index by the International Lesbian, Gay, Bisexual, Trans and Intersex Association (ILGA) of Europe has deemed Turkey to be second to last in LGBTQ rights across Europe.

They summarized that in the European-Asian country, “a great number of hate speech incidents and campaigns took place again [in 2020]. In some instances, the government or public figures blamed LGBT people or gay men for the COVID-19 pandemic, and for spreading other illnesses…

“A number of hate campaigns were run on social media, and endorsed by leading political figures.”

tw // mentions of violence and transphobia

this is the 17 yo trans woman i talked about a few days ago. people say that they're an immigrant, and the person who did this to them is their ex boyfriend, i'm not sure if its true tho.#EmreBozkurtTutuklansın pic.twitter.com/Hl1bfIS2bO

Ft. Lauderdale’s out mayor will honor an anti-LGBTQ hate group because it’s time to “let go”