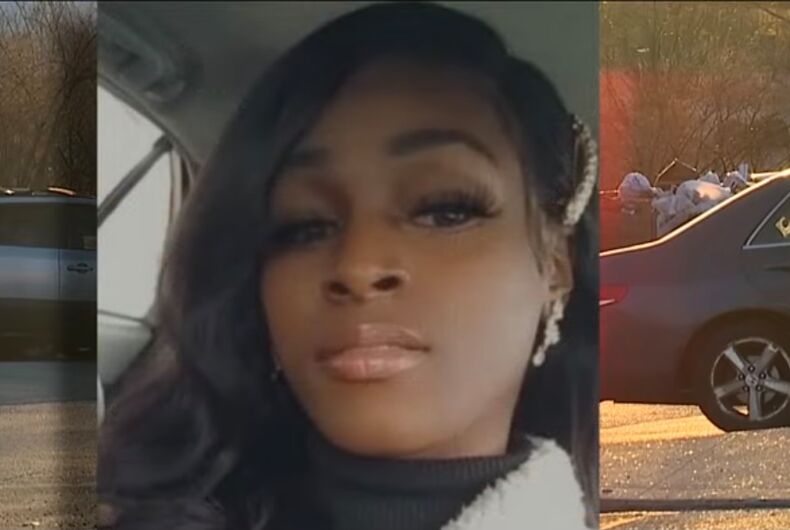 Diamond Kyree Sanders is being mourned as the latest trans woman violently killed. She died in Cincinnati on March 3 after being found alive with gunshot wounds in a parking lot early that morning.

The Human Rights Campaign has deemed her as at least the 11th transgender or gender non-conforming person to be murdered or face a violent death in 2021 so far. At this point in 2020, a record year for violence against trans and non-conforming people, the Campaign had only known of four deaths.

Clifton was near an apartment building in the Cincinnati suburb of Clifton early in the morning of March 3. At approximately 4:00 AM, she was found suffering from gunshot wounds and transported to a local hospital, where she succumbed to her injuries.

Her family memorialized her in an obituary, noting she came out to her family at “the last family Thanksgiving dinner.”

“Diamond was a ball of energy as a child and even up to her time of death. She valued her family and enjoyed spending time with them,” the obituary on the Preston Charles Funeral Home website reads. “As a child, she would say ‘I love my WHOLE family!'”

The obituary continues, “as an adult, Diamond was a traveler, known to be in New York City one week and New Orleans the following week. Diamond was really into fashion. She always coordinated her attire from head to toe, including matching hair and nails. She was known to say, ‘I have to be cute, honey!’

“A few weeks before her death she was in her grandmother’s closet putting on her fur coat, clothes and jewelry. Diamond’s unique style, charm and personality will be greatly missed.”

Police have not shared details of the murder or much else as the investigation is ongoing, but a Facebook post indicated that Sanders’ “purse and cell phone” was taken in the commission of a robbery prior to her death.

Less than a week after her murder, Cincinnati police have determined that her murder was not a hate crime, although they had yet to identify a suspect. “This was a crime of greed. This had nothing to do with the victim’s lifestyle,” Cincinnati Police Department spokesperson Eric Franz told Gay City News, which noted that he then “resort[ed] to insensitive language to describe Sanders’ gender identity.”

Franz later told The Cincinnati Enquirer “there were a lot of rumors initially that it has to do with the person’s lifestyle,” seemingly referring to her gender identity as a ‘lifestyle’.

“But we pretty quickly found out what really happened,” he claimed, saying “we are confident this is a solvable crime.”

No arrests have been made. Anyone with information is asked to contact the Cincinnati Police Department’s Homicide Unit at (531) 352-3542.

“It is never lost on me that last year, 2020, was the deadliest year on record when thinking about the stolen lives of Black trans members of our community, in part because this year we’re on track to outpace last year’s loss,” David J. Johns, Executive Director of the National Black Justice Coalition (NBJC), said in a statement regarding Sanders’ death. “Much more must be done to stop the violence that Black trans and gender-nonconforming members of our community are experiencing, NOW!”

They note that most of the trans and gender non-conforming people murdered or facing violent deaths, this year and previously, were Black and trans women. Sanders is “yet another example of gun violence against a member of the trans community. The high number of deaths this early in the year prove that not enough is being done to protect members of the trans community from violence and oppression,” the NBJC statement declared.

“Barely three months into this year, and we continue to see devastating violence against transgender and non-binary people in the U.S. This is unacceptable,” Tori Cooper, Director of the Transgender Justice Initiative (TJI) at the Human Rights Campaign said in a statement.

“Diamond was loved by her friends and family, and should not have been taken from her community.”

Early this morning, Kyree Sanders was found in the Clifton Colony Apartments in the 3200 block of Morrison Avenue…

Posted by The Voice of Black Cincinnati on Wednesday, March 3, 2021