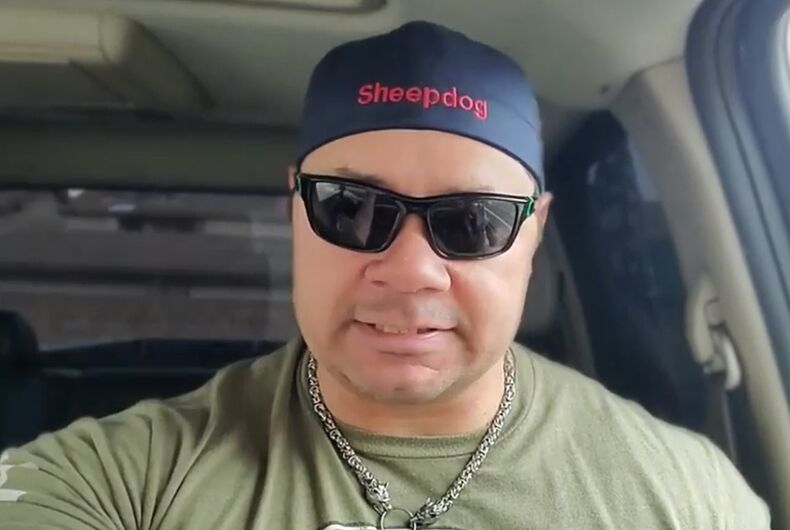 A Fresno, California police officer is under investigation for participating in a hate group’s anti-LGBTQ rally this past weekend.

An anti-LGBTQ church in the city is attempting to move into a progressive neighborhood known as an LGBTQ safe space, which has led to months of protests in the streets, as well as counterprotests from the far-right hate group known for violence, the Proud Boys.

In video footage posted to social media, an officer identified by the Fresno Bee as Rick Fitzgerald was spotted at one of the SPLC-designated hate group’s rallies.

The Fresno Police Department said that they are investigating the officer and that he has been suspended pending the results of the investigation, but they stopped short of confirming his name.

“Any allegations of actions unbecoming of a police officer or the affiliation with any alleged criminal or hate group will always be investigated and addressed,” said Fresno Police Chief Paco Balderrama. “Fair and impartial policing are extremely important in our society. There is no place in our police ranks for any biased, racists, or anti-Semitic views.”

A now-deleted video that Fitzgerald posted to YouTube shows him complaining about Joe Biden. Fitzgerald argued that only “a very small percentage” of police officers are bad. He also said that he attended a “Stop the Steal” rally to protest Biden’s 2020 election because he believed the untrue conspiracy theory that Biden “stole” the election.

“Biden is also beholden to BLM,” he said in a truck with an American flag in the background. “He owes them, and they know that.”

In a podcast, he said that he had reached the “third degree and leadership level of membership” with the Proud Boys.

According to the SPLC, the organization has four levels of membership. The first requires a man (members must be men and must “recognize that white men are not the problem”) to say he’s a “Western chauvinist.” The second involves enduring a beating. The third degree requires a tattoo.

The fourth degree requires getting in a “fight for the cause.”

The Tower District in Fresno, where the Tower Theatre is located, is known as a progressive neighborhood in the mid-sized central California city.

“As a member of the LGBT community, I know what this means to us,” neighborhood resident and Fresno County Board of Education member James Martinez said at a community meeting. “That was one of the first safe places for me to go.”

The neighborhood is home to the city’s Mardi Gras celebration as well as Reel Pride LGBTQ film festival. The LA Times described it as a “gay, artsy, liberal pocket of a far more conservative city.”

The Adventure Church has been criticized as anti-LGBTQ. Activists say that its website used to say that marriage is only between a man and a woman. It’s a Foursquare Church, a group of churches that don’t ordain LGBTQ people.

“I know there’s been a lot of talk out there, how we feel about the LGBTQ community,” said the church’s Pastor Anthony Flores. “We love you. We love God and we love people. And everybody always says, well, do you affirm them and will you affirm them? We love you and you are welcome to any of the church services we have and we welcome you.”

One activist called the church’s position “the whole ‘love the sinner/hate the sin’ stance [that] can be just as dangerous and toxic as outright homophobia.”

The protests even got attention from comedian Sarah Silverman.

So an anti-LGBT church called Adventure church is trying to buy The Tower theater in the most lgbt friendly area of Fresno (the arts district, obvs♥️) So… it’s for sale if someone wants to scoop them @LGBTfdn @chelseahandler @TheEllenShow @ActuallyNPH or maybe a Gofundme? https://t.co/m00g7fdN18

LGBTQ people in the area are worried about how the church will change the neighborhood. Tyler Mackey of the Tower District Marketing Committee said that he has been getting homophobic calls from people he doesn’t know since he spoke out about the church.

Haley White, who has been involved in organizing protests, said that she has been invited to church 20 times in the past month by people associated with Adventure Church.

“I’m sure they mean well, but after a while it’s, like, read the room,” she said. “We came here to escape that.”

Joe Biden needs to address global LGBTQ rights. Here’s where he can start.