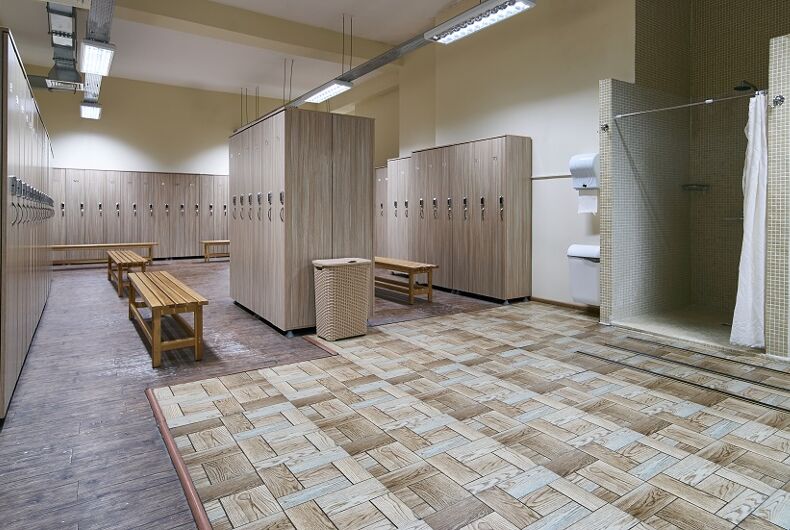 In 2016, Nick was a welcomed and accepted member of the boys’ swim team at Coon Rapids High School. He participated with his teammates and competed against others in the Anoka-Hennepin School District for months. Then, the school and school district barred Nick from using the locker room he and his other teammates had used because he is trans.

Today, the non-profit organization Gender Justice, the American Civil Liberties Union (ACLU) of Minnesota, and Stinson LLP announced that the school district will pay $300,000 to Nick after a court ruled that the move violated state discrimination laws.

Nick, previously identified only as “N.H.” in court and public documentation, was happy and healthy prior to the district’s sudden decision. Anoka-Hennepin made decisions about locker room and bathroom access on a “case-by-case basis” at the time and claimed it was necessary for Nick to use a segregated locker room by himself.

Before the school board decided to refuse him access to the boys’ locker room, he had been accepted by his classmates at Coon Rapids. His swim coach worked with him to find appropriate attire for matches. Afterward, he began to have mental health crises, leading to hospitalizations and his life was upended. He began receiving hate mail and faced bullying in school.

The school tried to “compromise” and asked for Nick to use an “enhanced privacy” locker room, which was segregated with a separate entrance that only one student has the ability to access at a time. He wasn’t able to finish the season and transferred schools. Along with his mother, he filed a lawsuit against the district for emotional distress and civil rights violations.

Christy Hall, a senior staff attorney for Gender Justice, told LGBTQ Nation in 2019 that those decisions were made arbitrarily and with little transparency. According to Hall, the school board “internally [debates] which restroom and which locker room a child gets to use” without asking the student or the family what is best.

Anoka-Hennepin said after the lawsuit was filed that they were “confident” the district’s “actions conform with state and federal law.” Both a district and the appeals court found otherwise.

“N.H. identifies as male, has socially transitioned to male, and lives as male,” Judge Peter Reyes wrote in the majority opinion for the Minnesota Court on Appeals, which decided to affirm the lower court’s finding in September. “Others also identify him as male and treat him as male. Based on this record, we conclude that N.H. is similarly situated to his peers because he, like his peers, sought to use a locker room that corresponded with his gender identity.”

“I never want any student to experience the discrimination and cruelty I experienced from the adults at my school,” Nick said today in the joint announcement of the settlement. He’s glad that this makes a difference for other “queer & trans youth to know that they’re not alone.”

He added, “I wanted the school district and the school board to understand that how they allowed me to be treated was wrong, and to hopefully make things better for the next generation of students – not just at Anoka-Hennepin, but across Minnesota.”

Megan Peterson, executive director of the Minneapolis-based Gender Justice, summed up her hope that the settlement sends one clear message: “discrimination against transgender students is not only hurtful and wrong, it is also expensive.”

Meanwhile, the settlement will require the school district to take several steps to prevent this from happening again.

This is not the first time the Anoka-Hennepin School District, Minnesota’s largest school district, was found to discriminate against LGBTQ students. In 2012, after already settling two lawsuits that found that the school district fostered a hostile environment for LGBTQ students, the district appointed a hate group employee to an anti-bullying task force they were directed by the state to create.

Those lawsuits cost the district over $270,000 in damages its school board agreed to pay. The entire ordeal, in the heart of the district formerly represented in Congress by Rep. Michele Bachmann (R), became the subject of a Rolling Stone feature.

In 2011, the school board in the district deemed conversations about LGBTQ people to be “controversial topics,” which was sought to replace the “neutrality” policy they previously had on the “issue” of LGBTQ students.

The bullying LGBTQ students faced in Anoka-Hennepin schools had become so widespread and relentless that it contributed to the suicide of openly gay 15-year-old Justin Aaberg in 2010 and several other students. Aaberg’s death — and at least eight other suicides by teens in a two-year period within Bachmann’s district — led to the area being deemed a “suicide contagion area” by state public health officials because of the unusually high death rate teens faced there.

In 2009, two teachers were put on leave for allegedly harassing students they believed to be gay. That led to a settlement that led to the school district forking up $25,000 to that student for also violating the Minnesota Human Rights Act.