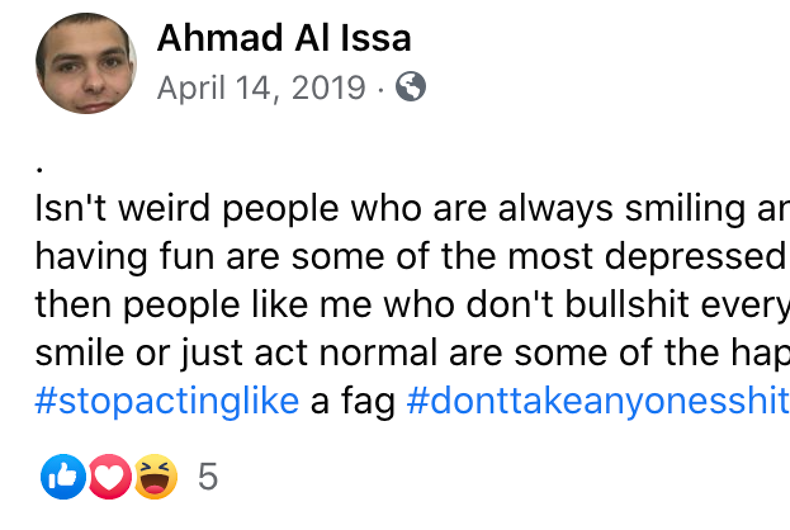 Screenshot of one of Ahmad Alissa's Facebook posts.Photo: Screenshot

Ahmad Alissa, the 21-year-old Colorado man who allegedly opened fire inside a Boulder King Soopers supermarket yesterday, posted homophobic content on social media in the years leading up to his murderous rampage.

Alissa was reportedly mentally ill and suffered from paranoia and hallucinations.

Alissa’s social media accounts document his struggles with mental illness and his love of sports, but also regularly contained homophobic language. He regularly used the words “fag” and “faggot.”

In July, Heavy reports, he mocked Microsoft’s rainbow-colored Xbox logo, sharing a graphic of it with “F**box loses PS4 wins” along with laughing emojis.

In another post he wrote, “God created Adam and Eve not Adam and Steve just saying.”

“Isn’t weird people who are always smiling and acting like they are having fun some of the most depressed people on earth,” he wrote in another. “And then people like me who don’t bulls*** everything as in don’t fake smile or just act normal are some of the happiest. #stillhappy #stopactinglike a f** #donttakeanyones***”

Ten people died during Alissa’s mass shooting spree. He was shot through the leg before surrendering to authorities.

Trans vet outed in front of his entire class at trade school. He got a $25K settlement.

A trans student was banned from his team’s locker room. Now the school district has to pay $300k.