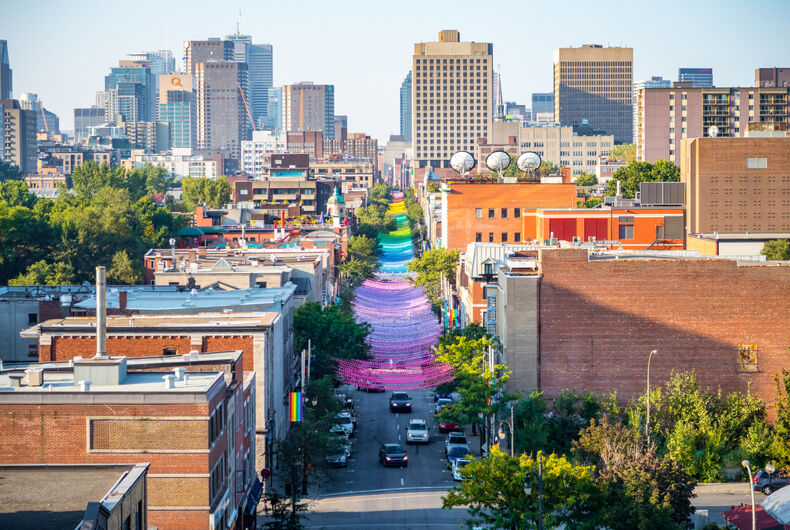 Montreal’s famous Gay Village is getting a new name and it has some locals angry and hurt. The queer enclave known worldwide will drop the word “gay” from the name in an effort to be “more inclusive.”

Instead, the area’s business owners say it will become “the Village of Montreal, the largest 2SLGBTQ+ village in the world.” The group then had to explain what the meaning behind the list of letters and numbers reminiscent of a license plate.

Related: Is the decline of the modern “gayborhood” a good thing?

2SLGBTQ+ adds 2S for Two Spirit and a plus sign at the end of the typical LGBTQ acronym for the community. “Two spirit” is a modern, pan-indigenous term for a person who fills a social role in their cultures that’s outside the gender binary. The plus sign is to indicate any other identity not already included in the tongue-twisting acronym.

The move hasn’t gone over well with some residents who have accused the group of erasing the area’s longstanding association with the queer community in favor of a generic name that will encourage gentrification and more commercialization.

“We’re not discriminating against anyone that associates themselves with gay,” Lee-Anne Millaire Lafleur, a Montreal Village Business Development Corporation board member, told CBC. “It’s for sure part of the community. We’re just trying to include the rest of the people that don’t feel that the word is associated with them.”

“The word gay represented a lot of people that today may not still find themselves represented by that one term,” Lafleur added.

“On the one hand, I understand why there’s a push not to call it the Gay Village because the word gay is now almost exclusively for gay men and it’s only one word in the LGBTQ acronym,” journalist and activist Richard Burnett told News 1130. “But on the flip side, I fear that there’s a de-queering of the gay movement.”

“Spaces like the Gay Village are important and we need to maintain them and we need to support them. And by erasing its identity, it can be a very dangerous thing.”

Julie Podmore, a professor and chair of geosciences at John Abbott College, pointed out that by removing the word “gay,” it makes the area more palatable to businesses that might have hesitated to move in before.

“There’s a real tension between a desire to mainstream, to increase the number of commercial establishments and open it to everyone to make [the neighborhood] viable, and that’s been going on since the 1990s,” she said. “Erasing the word gay makes it more accessible to all.”

Montreal’s change was decided by the area’s business owners.

“They aren’t the spokespeople of the community and they don’t have the legitimacy to speak for all the members of the community,” Pierre-Luc Tremblay, an area resident. “They speak for the merchants. And for me it’s a lack of respect towards all the gay and lesbian people who built this neighborhood, developed it, and allowed it to survive and thrive.”

Chicago’s longstanding gayborhood, Boystown, recently changed its name to be more inclusive of the LGBTQ community by restoring the neighborhood’s actual name, Northalsted. The change was driven by a petition from area residents.

#WATCH: "Spaces like the Gay Village are important. We need to maintain them, and by erasing its identity, it can be a very dangerous thing," said Queer journalist and activist, @bugsburnett, on the merchants group of the area's attempt to change the name to the Village. pic.twitter.com/dmDFXclNo0