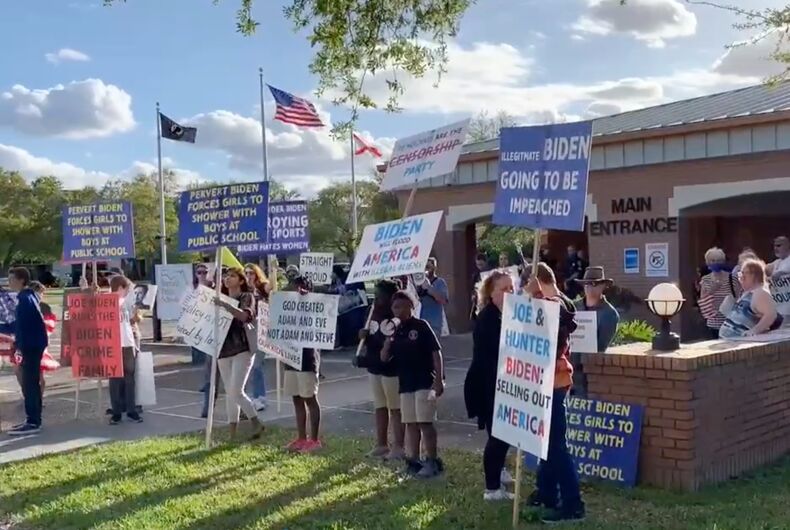 After Florida’s Brevard Public Schools sent out guidelines on how LGBTQ students should be treated under state and federal laws, the religious right, Trump supporters, and far-right politicians were outraged. They posted on social media and organized a protest for the next school board meeting where they planned to testify during the public comment portion.

What they didn’t expect was a determined group of students and parents ready to defend the policy. When the two groups met outside the building, Florida Today reports it sparked “heated exchanges and a vitriolic display of homophobic and transphobic bigotry.”

Holding signs with phrases like “straight & proud” and “Adam and Eve, not Adam and Steve,” the MAGA crowd called the students “queers” and “pedophiles.”

While the conservative group Moms for Liberty and local politicians had encouraged the crowd to gather, they were met with rainbow masks, T-shirts and signs that proclaimed “trans students matter” and “moms for equality, liberty for all.”

For the most part, civil rights supporters ignored the MAGA crowd. And while they waited outside the building to testify in front of the board inside, their numbers kept swelling. Coronavirus prevention measures meant that only a limited number of people could enter the chambers at a time.

The document was only a reminder of the school district’s policies that were implemented years ago. The guidance cited federal law and court rulings to determine how best to stay in legal compliance.

The document detailed that trans students could use the appropriate facilities that align with their gender identity and should be referred to with their preferred names and pronouns.

School board chair Misty Belford told the gathering, “Are we legally required to do the things on the document? We are, and we will.”

“We are just children going to school,” Andrew Triolo, a Satellite Beach High School student, said. “We want to learn to make friends and play sports, nothing more. Queer students are no different from other students in our school.”

In the end, not a single student spoke in opposition to the policy – and more than double the number of speakers supported LGBTQ civil rights than opposed it.

Bi women in relationships with lesbians more likely to be out, happier, & face more discrimination