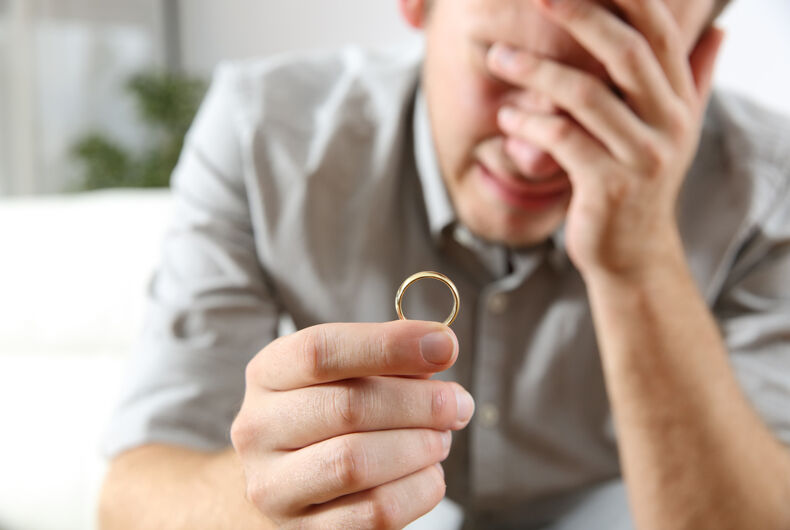 Alain du Chemin and Paul Gazzard were married this Valentine’s Day in a small ceremony on the British Channel Island of Jersey. They’ll be spending their honeymoon — and the duration of their marriage, if the plan stands — near Zurich, Switzerland.

Du Chemin has terminal glioblastoma, a form of brain cancer, and after two surgical procedures and almost two years of painful treatment, he is expecting to visit Dignitas, a Swiss non-governmental organization for an assisted suicide.

“I’m not going to be around forever but I really want to leave Paul with some good memories. And I won’t go into details about what the symptoms are as this tumour gets late – but they are not pleasant,” du Chemin said, “and they are quite undignified, to be honest. And that word – dignity – and losing all your dignity is not something I want to go through.”

The British couple sat down and detailed du Chemin’s plans to The Mirror, explaining why he decided to take the jump now.

COVID-19 rates are too high in the United Kingdom, so direct travel to Switzerland isn’t allowed. du Chemin had to leave London, move back to his native Jersey and stay there for months, and charter a private jet that cost him 25,000 pounds — approximately $38,000 — to make the trip to one of the few countries where assisted deaths of any kind are legalized.

“I really don’t want to have to take my own life in an unpleasant way,” he shared.

“Obviously if that happens over here there will be an inquest and whatever comes after that. I don’t want to put other people through this as well,” he added.

Prior to the pandemic, people were travelling from the UK to Switzerland to visit Dignitas approximately every eight days.

Euthanasia is only allowed in the European nation if the patient themselves takes the active role of administering the lethal action during the procedure, and if they are not committing suicide “from selfish motives” according to the English translation of its interpretation. Dignitas provides patients voluntarily seeking euthanasia with lethal drugs, equipment and clinic space.

du Chemin explains he made the decision after a research trial treatment he was scheduled to take part in was cancelled.

“The one thing I really would like, if I have to pass away is I would like, is for that to be part of a research trial that might help find a cure for somebody else in the future. But unfortunately even that’s not available to me at the moment.”

Because he has to go to Switzerland amidst a pandemic, du Chemin had to move up his plans while he’s “fit to travel,” and if he passes away there, he will not be buried with his family as he hoped. Instead, he will be cremated.

Gazzard noted that they had always hoped to get married, and wanted a much bigger ceremony. The pandemic also changed that, and the pair had to have a small, but still joyous, ceremony, he said.

“I think we both thought let’s just do this. Let’s just have a special day,” Gazzard told the Mirror.

du Chemin hopes that one day, people in the UK won’t have to go through such struggles to peacefully end their lives.

“At the moment, the only option to me is to fly to another country and go to sleep there,” he said.

He adds, “I am not depressed – I have been very lucky in many respects and I have the most lovely boyfriend and family. I just simply don’t want to go through potentially really unpleasant side effects and my husband and my family having to watch that.”

Editor’s note: An earlier version of this article incorrected referred to glioblastoma as a form of breast cancer instead of brain cancer. We regret the error.