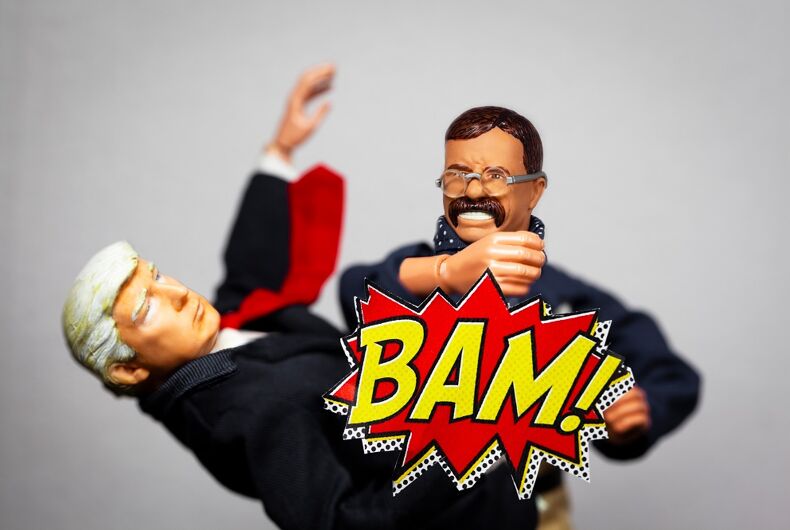 Gidley was responding to a question by chief anchor Bill Bemmer, who asked with the “social media crackdown, does [Trump] felt emasculated?”

Related: A painting of Trump having a Diet Coke with Lincoln & Nixon hangs in the White House

The word “emasculated” could mean being deprived or weakened, but Gidley — who is currently the national press secretary for Trump’s reelection campaign, even though the campaign is over — went straight to defending the president’s manliness.

“Look, I wouldn’t say emasculated,” Gidley said, “I mean, the most masculine person, I think, to ever hold the White House is the president of the United States.”

“But what he does see,” Gidley claimed, “is a systematic attack not only against him, but 75 million Americans who disagree with the socialist, communist vision that Democrats have for this country.”

“That is completely unfair!”

Gidley then rambles on, saying that if private businesses like Facebook and Twitter can “act the way they’re acting,” then other private businesses around the country should too. He then tries to advocate for businesses like gyms and restaurants to open up their shops and stores — during a pandemic, when many places still have restrictions in place over coronavirus — before Bemmer attempts to cut him off.

Of course, the need to even discuss Trump’s masculinity has created a reaction wave throughout the internet. Many were quick to point out the previous presidents who did more traditionally “masculine” things.

Actual war veterans Ulysses S. Grant and Dwight D. Eisenhower, polio survivor Franklin D. Roosevelt, and the oldest living former President Jimmy Carter were popular rebuttals. CNN editor-at-large Chris Cillizza himself made a list including George H.W. Bush and John F. Kennedy (who both survived attacks from the enemy in war), Rutherford B. Hayes and William McKinley (who were wounded in war), and the “nation’s greatest general,” George Washington.

One response that was lacking was Richard Nixon, who was at least “masculine” enough to resign after being caught in his lies.

Theodore Roosevelt, the 26th president, became a trending topic because he was a favorite among responders. Considering that he went blind in one eye due to his love for boxing, was once shot in the chest and continued campaigning, and was the leader of the Rough Riders (men who voluntarily went into war against the Spanish Empire), it’s understandably a popular rebuttal.

(Although, Roosevelt’s obsession with traditional masculinity, rise to success through imperialism, his penchant for using racial epithets, and his well-known belief that European white men were “superior” to all other humans, prior to the rise of Nazism, actually puts him more in line with Trump than one may realize.)

Trump National Press Secretary @JHoganGidley says that President Trump is the "most masculine person I think to ever hold the White House." pic.twitter.com/2wCIIfMYHP

So… no? Not even need to go for revolutionary war folks.

Good lord…Teddy Roosevelt, Ike, Grant…GEORGE FUCKING WASHINGTON would like to have a word with Hogan Gidley. https://t.co/gb63Pixlba

One of the many weird things about this era has been Trump allies retrofitting him with “tough guy” qualities. So a guy who golfs a lot and files lawsuits = manlier than Teddy Roosevelt, who killed bears by grunting at them. https://t.co/muLuZt6vD3

"The bullet is in me now, so that I cannot make a very long speech but I will try my best." — Teddy Roosevelt, after getting shot before a campaign speech. I think he's got "most masculine president" pretty well locked up. Plus he had facial hair which is a prerequisite. https://t.co/iaWsnCXlzv

Theodore Roosevelt with the Rough Riders during the Spanish American War.

Stupidest statement ever from this White House, a very high bar.
Jimmy Carter at NINETY FIVE YEARS OLD has a home accident that cracked his head solidly, leaving him battered and bloody.
Hours later he's working on a Habitat for Humanity house.https://t.co/xh9yGspdWI

obviously the most masculine president was Taft, because that magnificent fat bastard DGAF pic.twitter.com/R6xnbMwprW

President Bone Spurs is not the poster boy for masculinity

Yeah, I agree your point that many other presidents are more, um, traditionally "masculine" than Trump, but maybe consider when you correlate effective leadership with performative masculinity, intentionally or unintentionally, it basically hurts everyone, including men?

😂😂😂😂😂😂😂….They are obsessed with this masculine bullshit… Such insecurity…