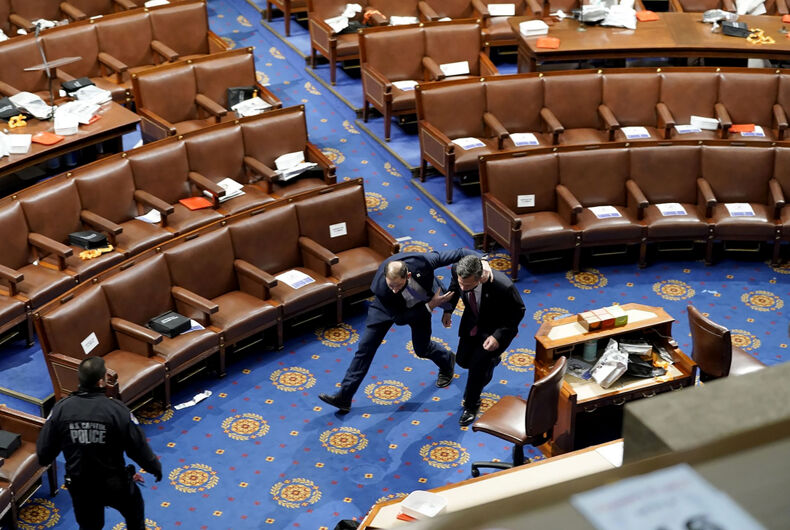 Reps. Pramila Jayapal (D-WA), Brad Schneider (D-IL), and Bonnie Watson Coleman (D-NJ) have tested positive for the coronavirus after sheltering in the Capitol with Republican members who refused to wear a mask. The Congress members were locked down as supporters of Donald Trump stormed the building in an attempt to execute Vice President Mike Pence and overthrow the results of the presidential election.

As insurrectionists surged through the Capitol, senators, representatives, and staff members were whisked off to hidden locations around the building. But two Republican congress members, attending so they could aid the seditious riot by objecting to some state’s electoral college votes, were already COVID positive – and knew it.

“I just received a positive COVID-19 test result after being locked down in a secured room at the Capitol where several Republicans not only cruelly refused to wear a mask but recklessly mocked colleagues and staff who offered them one,” Jayapal said on Twitter.

“Only hours after Trump incited a deadly assault on our Capitol, many Republicans still refused to take the bare minimum COVID-19 precaution and simply wear a damn mask in a crowded room during a pandemic—creating a superspreader event ON TOP of a domestic terrorist attack.”

Reps. Chuck Fleischmann (R-TN) and Gus Bilirakis (R-FL) are known to have been positive when they attended the joint session of Congress. It is uncertain whether the three Democrats were in the same room as the two men or were sheltering with other members.

Both Fleishmann and Bilirakis objected to the certification of the Electoral College votes. They have both said they attended – both before and after the riot – to join the seditionist plot to delay the official acknowledgment that President-elect Joe Biden had won the election. The Capitol physician has confirmed that both men had tested positive before the joint meeting of Congress.

While masks are required in the building, the GOP has resisted the simple coronavirus prevention measure and have spread the infection to each other repeatedly. A White House event late last year turned into a “super spreader event,” infecting several government officials.

So far more than 50 lawmakers and 220 workers have tested positive or were presumed to be infected. Representative-elect Luke Letlow (R-LA) died from the virus shortly before he would have been sworn into office.

The first wave of lawmakers has been given the first shot of the coronavirus vaccine. Watson Coleman, who is experiencing mild symptoms, has received the initial dose. The vaccine requires two shots, spaced several weeks apart, to be fully effective.

“Today, I am now in strict isolation, worried that I have risked my wife’s health and angry at the selfishness and arrogance of the anti-maskers who put their own contempt and disregard for decency ahead of the health and safety of their colleagues and our staff,” Schneider said as he announced he had tested positive after driving home from Washington D.C.

“It angers me when they refuse to adhere to the directions about keeping their masks on,” Watson Coleman said in an interview. “It comes off to me as arrogance and defiance. And you can be both, but not at the expense of someone else.”

Watson Coleman and Schneider echoed the call, with Schneider demanding that any member of congress who refused to wear a mask be “immediately removed from the House floor by the Sergeant-at-arms for their reckless endangerment of their colleagues.”

The Capitol physician has urged all members of congress to be tested immediately to see if they were also infected during the insurrection.

All three Democrats support LGBTQ rights. Jayapal is the proud mother of a non-binary child.

White House claims Donald Trump is “the most masculine” president ever