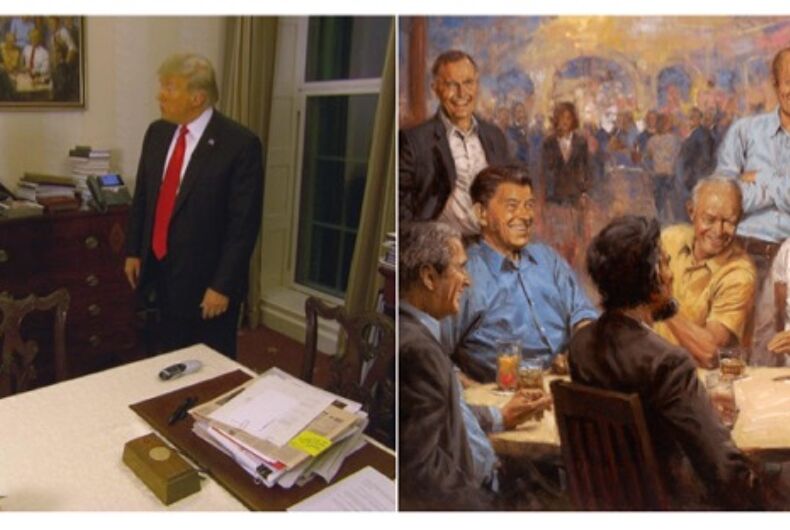 During Leslie Stahl’s 60 Minutes interview with President Donald Trump in the White House, eagle-eyed viewers caught what has to be the most godawful decoration to ever grace the walls of the People’s House.

Andy Thomas’ painting depicts Trump sitting around a table with his BFFs: Richard Nixon, Dwight Eisenhower, the Bushes, Teddy Roosevelt, Gerald Ford, and… Abraham Lincoln. It is, surprisingly enough, not on black velvet.

The men are having a round of drinks and yukking it up – although Trump and George W. Bush seem to be having Diet Cokes since they’re a teetotaler and a recovering alcoholic respectively.

oh my god, it's hanging in the white house pic.twitter.com/wrq8eo7Bvx

Trump caught wind of the painting and called up the artist personally to ask for a print.

Related: Trump boarded Air Force One with toilet paper stuck to his shoe & no one told him

“I was ecstatic,” Andy Thomas, the man who painted ‘The Republican Club’ told TIME Magazine. “A lot of times gifts aren’t really hung up, they’re just pushed in a closet somewhere. To find out it’s actually hanging is really a treat.”

The good news is that while Trump replaced the Oval Office red drapes with gold ones and hung a massive chandelier to the dining room, the inside of the White House has not been gilded.