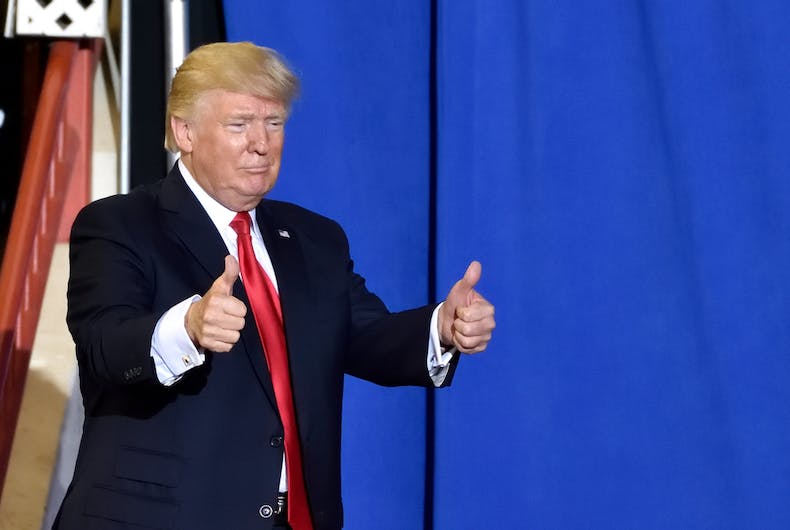 HARRISBURG, PA - APRIL 29, 2017: President Trump giving a two thumbs up gesture as he exits the stage of his campaign rally. Held at The Farm Show Complex and Expo Center.Photo: Shutterstock

In a stunning exhibit of performance art on the state of his crappy presidency, Donald Trump boarded Air Force One with a piece of toilet paper stuck to his shoe.

Apparently, neither his staff members nor security detail bothered to tell him. Also, why are there pieces of toilet paper sitting around on the floor of the presidential bathroom? Who throws butt wipes on the restroom floor? Is he a pig?!

Twitter, however, saw the streaming bit of butt wipe hanging off Trump’s toes as he climbed the steps to the waiting plane. And while the internet may hate Trump, remember that his staff must feel the same way.

WATCH: President Trump boards Air Force One with what appears to be toilet paper stuck to his shoe pic.twitter.com/A0AEYXXlXq

I have chased strangers down a hallway to help them get toilet paper off of their shoe. This saga everything you need to know about how little the people surrounding Trump like or respect him. https://t.co/j1hPwLNbON

I can't wait for Sarah Sanders to deny this.

Is this like when children pin a note to another child’s back and snigger at the child who walks around obliviously?

Even your staff don't care if you have toilet paper to your shoe. pic.twitter.com/w59eXJomer

Trump boarding AF1 today with toilet paper stuck to his shoe. Trump has no friends. pic.twitter.com/BbMU66uwNV

If you haven't laughed yet today, here's a video of President Trump walking up the stairs to Air Force One with toilet paper stuck to his shoe. While this isn't grounds for the #25thAmendment, it does fit the pattern of Trump just being a fucking idiot.pic.twitter.com/eYu8X7Uneg

A walking shit show. He makes this too easy…