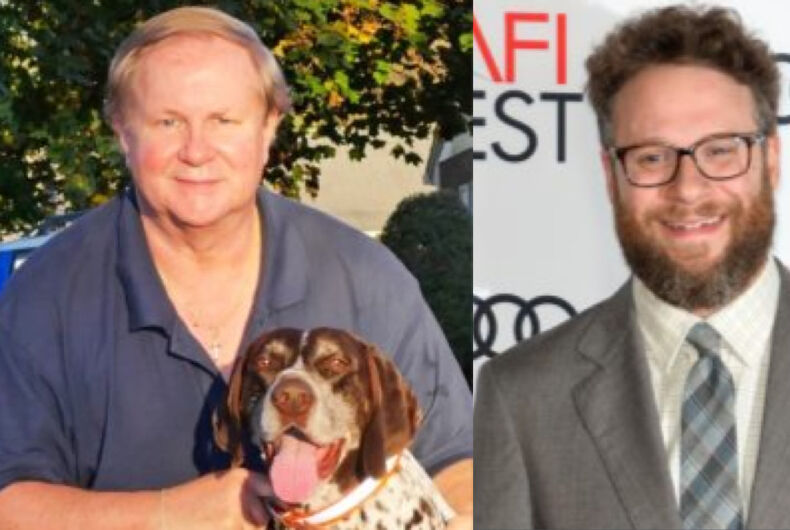 For days, comedian and director Seth Rogen and Sen. Ted Cruz (R) have been arguing on Twitter. Rogen has criticized Cruz, calling him a “fascist,” for his role in enabling former President Donald Trump and inspiring several of the rioters that stormed the U.S. Capitol on January 6. Cruz has mocked Rogen as a “moron” and “Marxist with Tourette’s” for defending what he calls the “fascist left.”

Then, Pennsylvania Republican Dean Browning – the white man who’s married to a woman who was caught pretending to be a Black gay man to win online debates last year – jumped in.

Related: Our top 12 outlandish stories that will only make sense if you made it through 2020

Rogen and Cruz’s back and forth started on Inauguration Day when Cruz said that President Joe Biden was “more interested in the views of the citizens of Paris than in the jobs of the citizens of Pittsburgh,” a reference to the Paris Agreement on climate change, which was named for the city where it was signed, not he citizens who wrote it.

Cruz replied on his personal account, sarcastically calling Rogen’s response “charming, civil, educated.” He said that “If you’re a rich, angry Hollywood celebrity, today’s Dems are the party for you.”

Later, Cruz would tweet to Rogen that “even though you behave online like a Marxist with Tourette’s (screaming ‘F U! F U!’ is really, really clever), your movies are typically pretty funny.” That prompted Rogen to reveal that he actually does have mild Tourette’s syndrome and that “VERY few cases of Tourette’s manifest in uncontrollable swearing. Most cases, like mine, manifest in twitching.”

“Your lies got people killed,” Rogen later said to Cruz, “you have blood on your hands.” He refused to call the back-and-forth a “feud” because Cruz “deserves ridicule” for his actions.

Fuck off you fascist.

They’re all dead. So I think we’re good. And Walt Disney was a Republican.

Even though you behave online like a Marxist with Tourette’s (screaming “F U! F U!” is really, really clever), your movies are typically pretty funny.

I’m sure you hate that I enjoy them. https://t.co/ImVm26QWb8

Your lies got people killed. You have blood on your hands. https://t.co/eoy1uUDK73

This isn’t a Twitter “feud.” @tedcruz tried to overthrow our government. He inspired a deadly mob to storm the Capitol. And I think that deserves ridicule. So fuck him.

Why does he keep this fight going with Seth Rogen even though he’s getting destroyed at every turn? Because he’s guilty of sedition. He’s hoping distraction & time diminish the urgency of accountability. Don’t let him change the channel or the subject, it is sedition every time.

After the two went at it for the fourth day in a row, Browning decided to tweet at Rogen. Browning is a former commissioner in LeHigh County, Pennsylvania, who ran in the GOP primary for a congressional seat. He describes himself as a “proud pro-life & pro-2A Christian conservative” and he lives with his wife Cheryl of 32 years.

“If @SethRogen lives in Canada,” the Republican wrote, “why is he so obsessed about our President and our Senators? How could you sit in another country all day obsessing about a different country’s politics? Go worry about Trudeau and company.”

Rogen, who first moved to the United States at 17, tweeted in reply, “I live in America you stupid fuck.”

Browning somehow was unclear with what that meant, so he asked Rogen, “Interesting. So would you consider yourself American? In that case, is Ted Cruz not an American?”

He added that “Sethy” was “really stepping in it” by stating he lives in the United States.

Rogen clarified once more, “I have an American passport and I vote in America and am an American citizen you fucking clown.”

“Now go back to pretending to be a gay Black man and shut the fuck up,” he said to Browning.

Browning, attempting to get the last word, tried to get Rogen to agree that “Ted Cruz is an American,” which was not in dispute.

I live in America you stupid fuck.

I have an American passport and I vote in America and am an American citizen you fucking clown. Now go back to pretending to be a gay Black man and shut the fuck up.

Dude just stop this is sad.

Rogen referred to Browning’s Twitter “mix-up” from November, when the straight, white politician got into an argument on Twitter with a Democrat who supported Barack Obama, and Browning responded to them: “I’m a black gay guy and I can personally say that Obama did nothing for me, my life only changed a little bit and it was for the worse. Everything is so much better under Trump though. I feel respected — which I never do when democrats are involved.”

Which is strange, because Browning is very much not “a black gay guy.”

That led to accusations that Browning was using a second account where he masqueraded as a gay Black man to spin support online for Donald Trump. Twitter sleuths thought they found such an account that used the same phrasing from Browning’s tweet, under the name “Dean Purdy.”

“Purdy” then claimed that he wrote the message that Browning posted, but that he didn’t know why it posted to Browning’s account.

“The message that you saw on Dean’s Twitter was posted- I actually don’t know how it was posted. But I did send it to him because I had a problem with how people of my race and sexual persuasion are treating Donald Trump,” he said after Trump’s electoral loss.

To prove he was real, “Purdy” posted a video of himself online talking about the incident. People realized that he was not only real, but actually known as Byl Holte, the nephew/adopted son of music icon Patti LaBelle.

Holte had also written columns online under his name where he describes himself as an “Anti-feminist TV Critic.”

It appeared that what likely happened was that Browning meant to pose as a Black gay man to win an internet argument and, when caught, Patti LaBelle’s nephew/son ineptly tried to defend him, but there hasn’t been much further clarification to refute or solidify that argument.

Later, LaBelle herself even acknowledged the situation. “Guess what? I didn’t choose my family. I choose my friends. I love Billy. He has a Republican mind. And, guess what? I don’t. But do I hate him for having the mind that he has? No, I can’t.

“…but when my name comes in that mistake, that’s a no-no,” she said in a December interview.