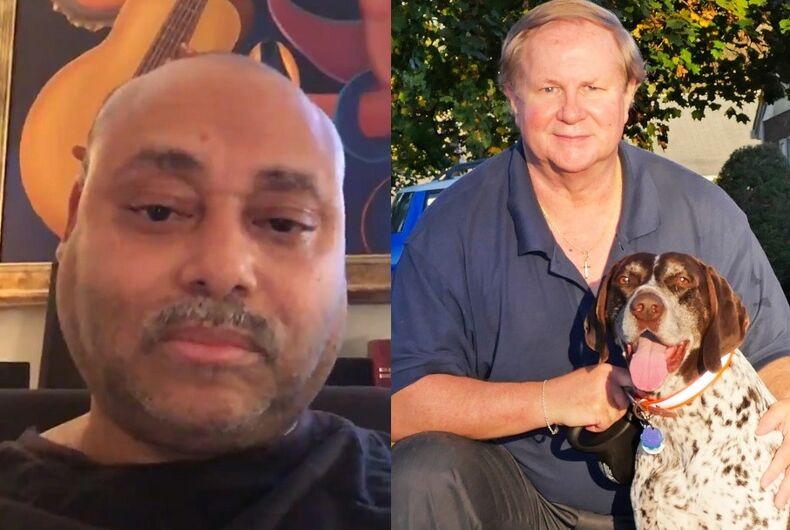 A straight, white Pennsylvania Republican politician’s statement on Twitter that he is a “black gay guy” has a lot of people thinking that he started a fake Twitter account to win internet arguments.

And then Patti LaBelle’s son apparently got involved.

Dean Browning is a former commissioner in LeHigh County, Pennsylvania, and ran in the GOP primary for a congressional seat. He describes himself as a “proud pro-life & pro-2A Christian conservative” and he lives with his wife Cheryl of 32 years.

Earlier this week, he got into an argument on Twitter with a Democrat who supported Barack Obama, and Browning responded: “I’m a black gay guy and I can personally say that Obama did nothing for me, my life only changed a little bit and it was for the worse. Everything is so much better under Trump though. I feel respected — which I never do when democrats are involved.”

Which is strange, because Browning is very much not “a black gay guy.”

Dean Browning, former Lehigh County comissioner who seems to have forgotten to log into his burner account, was about 2,500 votes away from being the GOP's nominee in Pennsylvania's 7th Congressional district this year. pic.twitter.com/ftiY68wae6

“To anyone who has spent enough time watching pro-Trump conservatives and #resistance liberals argue on the internet, it seemed extremely clear what had taken place,” wrote Rebecca Jennings at Vox. “Browning was the owner of another Twitter account, one claiming to be a gay Black man who loved Trump, and he simply forgot to log in to it before posting the reply (this is often called ‘sock puppeting’ online).”

Posing as someone you’re not on social media just to win an argument is frowned upon, and a lot of liberals on Twitter made fun of Browning. Among them was Pennsylvania Rep. Malcolm Kenyatta (D), who actually is Black and gay.

WHOA! What the hell is wrong with the @PAGOP?!? I promise you as a Pennsylvanian, our state is so much better than these cheats and liars. They hold power through unethical and illegal gerrymandering and this election brought out their worst because they know they’re losing. pic.twitter.com/uj9znVqF1x

Then some people claimed that they found the sock puppet account, which used the name “Dan Purdy” and claimed to be a Black gay man who made racist and misogynist comments and participated in the comments under Browning’s posts regularly.

Browning, though, denied the accusation. He said that he had copied “a message” from a Black, gay man into his comment accidentally.

“Trump received record minority votes & record LGBTQ votes,” he said, which is false since a majority of non-white and LGBTQ voters said they voted for Joe Biden this past election, according to early, unweighted exit polls that may have even exaggerated minority and LGBTQ votes for Trump. So whatever record for votes Browning believes Trump set, Biden beat it in the 2020 election.

Is this your totally real black gay conservative follower? pic.twitter.com/XSxgGjjxlc

Now, up to this point, it was just internet speculation that Purdy was Browning’s sock puppet account. But then Browning confirmed that Purdy was involved by re-tweeting a video from a man who claimed to be Purdy.

“Hey guys, my name is Dan Purdy, and I am indeed a gay Black man,” said “Purdy.”

“Purdy” then claimed that he wrote the message that Browning posted but that he didn’t know why it posted to Browning’s account.

“The message that you saw on Dean’s Twitter was posted- I actually don’t know how it was posted. But I did send it to him because I had a problem with how people of my race and sexual persuasion are treating Donald Trump.

so the video was taken down, but here it is in case you want your brain to melt: pic.twitter.com/umGPjt5sN4

It could have stopped there, but then some people online noticed that the image Purdy used for his account was the same as that used by Byl Holte, the adopted son of music icon Patti LaBelle. And they look alike too.

Holte has written columns online under his name where he describes himself as an “Anti-feminist TV Critic,” so he could very well be the conservative Trump-supporter in question.

It looks like what happened was Browning was posing as a Black gay man to win an internet argument and, when caught, Patti LaBelle’s son ineptly tried to defend him, but no one has said conclusively what happened.

Meanwhile, Purdy – or Browning, as the case may be – seems to be enjoying the attention.

I guess we’ve not gone only viral – but over the rainbow.