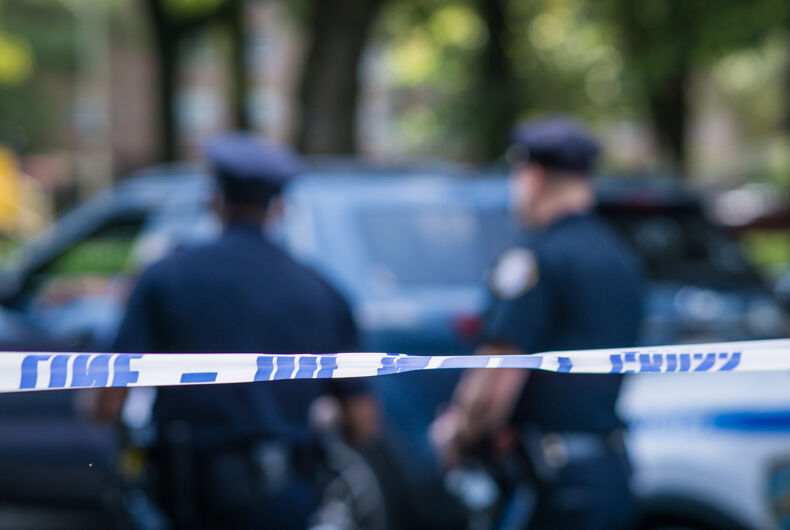 New York/USA September 4 2020 NYPD police investigate as a bicyclists was struck and left the scene of the accident in the Bronx.Photo: Shutterstock

A cold-hearted 15-year-old girl has been arrested in the brutal ambush slaying of 20-year-old Nyla Bond in the Bronx. A 15-year-old boy was also arrested and charged in the killing. A third teen suspect remains at large.

Bond was reportedly an “ex-flame” of the girl’s. The calculating teen contacted Bond’s mother the day after the killing to express her condolences in an attempt to deflect suspicion.

Related: Trans woman gets $30K in settlement with NYPD after she was arrested for saying her name

The murder was reportedly revenge for explicit photos of the 15-year-old that she thought Bond had posted. The police have not confirmed that Bond was the one who put the photos online.

The suspects’ names have not been released since they are juveniles.

The girl reportedly lured Bond out of her apartment and the two boys were waiting down the hallway to jump her in what cops are calling a “planned revenge homicide.”

Surveillance video shows the arrested male stabbed bond in the chest while the third teen reportedly wielded what appeared to be a cane.

“She set my daughter up and she even messaged me on Facebook afterward,” Bond’s mother, Shadonna Watson, told the Daily News. “She said ‘So sorry for your loss, mama bear.’ This girl is the devil. That girl cut my daughter a few weeks ago. If she did that, she probably came back to finish the job.”

In October, Bond filed a police complaint alleging that the ex-girlfriend had attacked her with a knife, slashing her face and stabbing her in the back and buttocks. Police did not make an arrest in the case.

Both teens were charged with murder, manslaughter, and possession of a weapon.