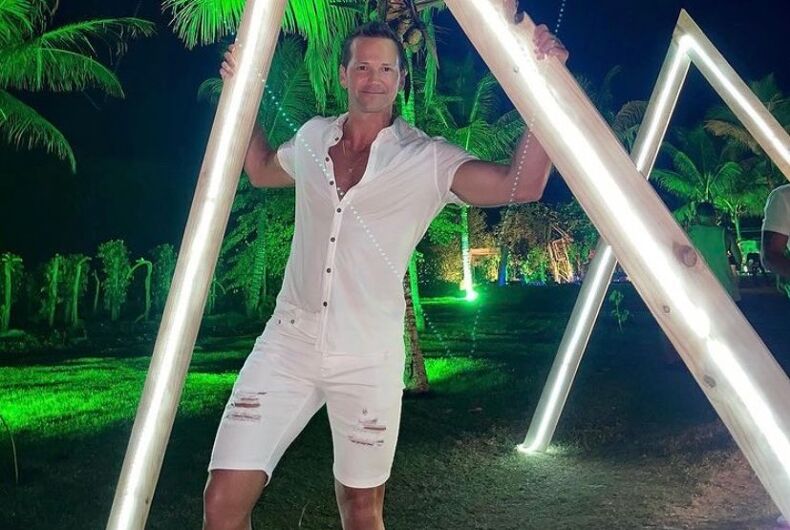 Disgraced former Rep. Aaron Schock (R-IL) made a name for himself in the U.S. House as a solid vote against LGBTQ equality while denying he is gay. Schock was taken down by a scandal that involved allegations that he spent public and campaign funds inappropriately to decorate his office and travel around the world.

Schock finally came out after being photographed hanging out with other gay men around the world, shoving his hands down a male stripper’s pants in Mexico, and making out with men at music festivals. He has lived the stereotype of a rich gay party boy to the hilt – including flouting coronavirus pandemic regulations.

Related: How I found myself in the middle of the Aaron Schock controversy

While a New Year party in Puerto Vallarta – and the resulting backlash against the men who attended – has captured the most attention, Schock spent his holidays in Brazil.

The Instagram account GaysAgainstCOVID has been lifting up examples of gay men egregiously breaking prevention restrictions to party. The account was targeted by a group of circuit queens angry that their bad behavior had been spotlighted and was briefly taken down yesterday.

When the account returned, Schock was the next covidiot to be exposed.

Since the beginning of the pandemic, Schock has been repeatedly caught spending his “self-isolation” the only way he knows how: partying with shirtless, hairless, muscular men. Last April, he was spotted hanging out at a resort in Mexico with other gay men, one of whom posted pictures of the group to social media. LGBTQ Nation contributor James Duke Mason caught a screenshot of the posts and shared them on Facebook.

“BE MY QUARENTINE [sic],” wrote Mauricio Kirschner in a post that says he’s in Cabo San Lucas on the Mexican Riviera, along with a photo of several shirtless men, one of which is Schock.

The other picture Mason shared is from Instagram influencer Alec Rugo, and Schock is in it as well. In a picture Schock posted on Monday, Rugo is pictured with him partying in Brazil.

Schock was a reliably anti-gay vote for Republicans, despite the parade of young men who visited his DC apartment, and his outing by journalist Itay Hod in 2014. Hod claimed a friend of his found Schock getting out of the shower with his male roommate.

Editor’s Note: This article has been updated to clarify Hod’s claims.

Winning the election is not enough: Perpetrators must be tried & punished