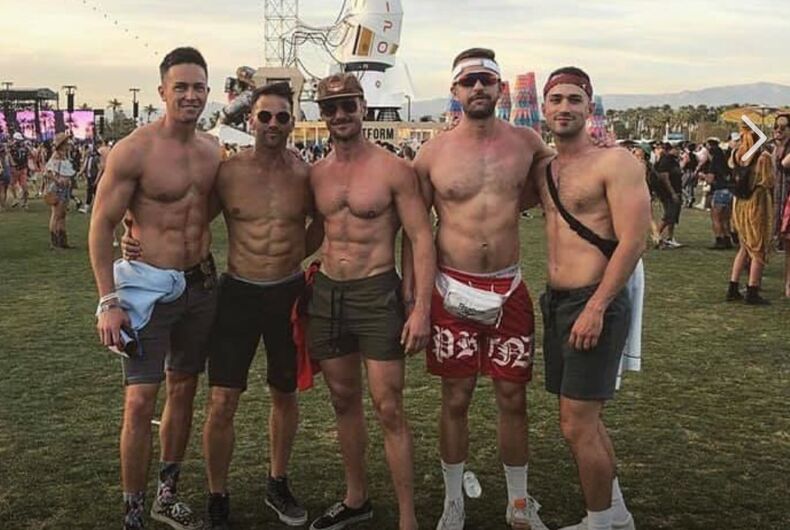 Former Republican Congressman Aaron Schock posed with gay men at Coachella and now the other men are apologizing.Photo: Facebook

I didn’t set out to become one of the main players in the ongoing saga that is Aaron Schock. Believe me, the last thing I wanted was to be in any way associated with this man.

I knew who he was for a while, dating back to his time as a closeted, anti-gay Republican Congressman, but truthfully I’d forgotten about him and considered him – after he resigned in disgrace from the House of Representatives in a cloud of scandal due to accusations of campaign finance fraud – a joke and figment of the past who would be consigned to the dustbin of history.

It was only in 2019 after I saw photos of him at Coachella, posing with people I knew who I thought would have known better, that I felt a need to speak out.

Here was a man who had spent years of his life using his public office to oppose the rights of LGBTQ people, now gallivanting around celebrating his apparent newfound self-acceptance and freedom, expecting not to be called out or even questioned? What kind of delusion and shamelessness does that require?

I simply re-posted some of the photos I’d seen on my Facebook page and the story took a life of its own. Within days it was trending on Twitter and there was a huge groundswell of people calling out Schock’s hypocrisy and holding him accountable for his previous actions. After that I was very happy to let the story fade away.

The story resurrected itself however earlier this year when Schock released a statement in which he came out as gay and finally addressed the controversy publicly.

The statement didn’t include a single word of regret or remorse for his anti-LGBTQ votes and advocacy. Instead it was full of excuses and cop-outs, but it didn’t once include the words “apologize” or “sorry.”

This was a pathetic, mealy-mouthed attempt to circumvent responsibility from a man who used his position of power to discriminate against and hurt people of his own community who now wanted to live his life openly without any consequences.

I was tempted to respond but decided that I didn’t want to inject myself into the fray once again. Last week though, I was forced to address it when friends sent me photos of Aaron partying in Mexico, shirtless with arms draped around a group of friends on the beach.

Even if these guys are quarantining together, I thought to myself, what kind of clueless, tone deaf, ignorant people pose for and post a picture like this on social media during a global quarantine when over a hundred thousand people have died?

It just serves as another example of this man’s brazenness and stupidity. We as a community can’t allow him to get away with it.

I’ve been quite frankly disgusted and appalled by those who’ve said we should show this man empathy or sensitivity. The idea that we need to handle a 38-year-old former member of Congress with kid gloves is absurd.

It would be one thing if he’d asked for forgiveness or showed contrition, but as Chris Johnson of the Washington Blade recently reported, Schock was recently spotted at a fundraiser for Donald Trump in Beverly Hills.

Schock hasn’t changed. He’s still the same self-serving, self-loathing, shameless fool he was before, and we shouldn’t stand for it.

Why am I so passionate and angry about this issue? Why do I take it so personally? Schock abused his position of public trust to harm LGBTQ kids, some of whom have died by suicide due to the hate that politicians like him promote.

He is not some regular private citizen who’s going through their own personal coming out journey; he imposed his self-hatred on the LGBTQ people of America, and he cannot be allowed to continue with normal life until he accounts for that.

As far as I’m concerned, there is no moral ambiguity on this issue.