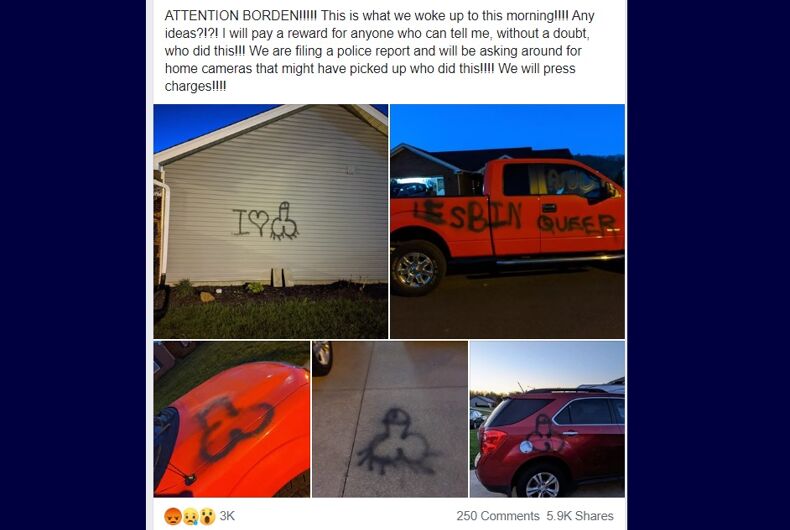 A lesbian couple came home to find hateful messages gratified on their home and vehicles.

Keri and Katrina Sprinkle live in Borden in southern Indiana. On April 10, they woke up to find the words “LESBIN” [sic] and “QUEER” spray-painted on their truck. Penises were painted on the truck and their driveway too.

The vandal also painted a message on their house, “I love penis,” written in symbols.

“I was in total shock,” Keri told WLKY. “I collapsed in the middle of the street and just started crying because it was that whole feeling of violation and how could someone not only do this to my place of dwelling, but my vehicle, and then we found another graffiti mark in the driveway, and then we found one on her car as well.”

“I will pay a reward for anyone who can tell me, without a doubt, who did this!!!” she wrote.

Now the couple said that they were inundated with supportive messages from all over the world. People from the area also came to their place to help undo the damage.

And a local security equipment shop installed a camera for them.

“We’re so grateful for and humbled by all of the love and support,” Katrina wrote in an update to her Facebook post.

“Your immediate responses got us answers quickly,” she added.

The Clark County Sheriff’s Department said that a 13-year-old has been apprehended and they have already admitted to the graffiti.

Authorities haven’t said whether the teen will face charges, and the Sprinkles say they “hope justice is served to set an example that bigotry will not be tolerated,” according to WLKY.

UPDATE: Our post is being shared around the world!!! We're so grateful for and humbled by all of the love and support. …