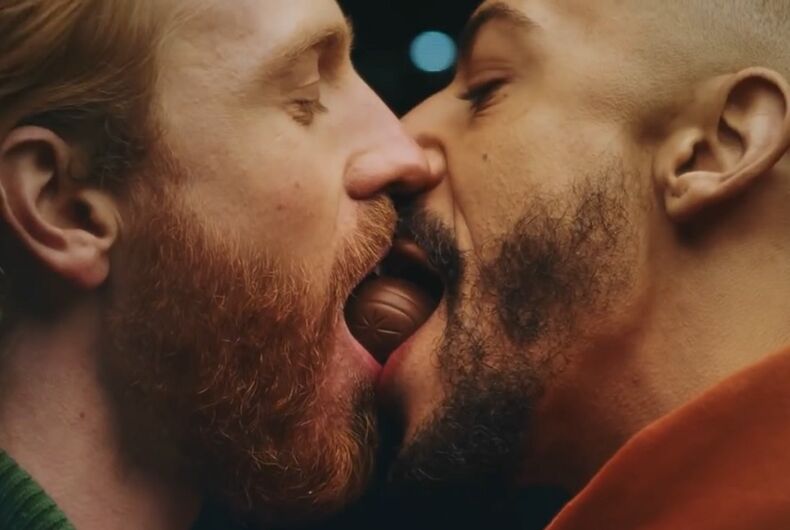 Real-life couple Callum Sterling and Dale Moran went viral this month after they were featured in a Cadbury Cream Egg commercial. The two men intimately share one of the chocolate treats as other people demonstrate other ways to eat the confection.

As the video swept the web, the religious right and internet haters quickly piled on to condemn the company or post disgusting comments about the men. That’s when Sterling posted to Instagram about it.

“So it’s ok when an advert sexualises a women, a caucasian women, THIRTY SEVEN years ago even, to benefit the male gaze and make other women feel inadequate if they do not live up to this beauty standard,” he posted with a Maybelline commercial featuring Lynda Carter.

“But it’s not okay, in 2021, to have an advert of a multi racial (strike one) gay couple (strike two) on your screens for 10 seconds (strike three) eating/kissing/sexualised (strike four)  does anyone see how ridiculous this is? Like actual LOL.”

“Also I’m so so happy that [Moran] and I ended up being the faces for this moment as I’ve been in the dance industry for 11 years full time and let me tell you, THAT, Alongside living in London as well as being an out queer and proud human is enough to make my skin so thick that I genuinely don’t feel once ounce of hurt from any negative comments being put out into the world as a result of the advert with [Cadbury] that we shot a few weeks ago,” he continued.

“I’m super happy this has all happened. The love we have received totally outways the fear based negative comments. Makes me proud to live in the UK and to have so much love in my life.”

“And let’s be honest, I’m sure there would be half as many complaints if it was two ‘beautiful’ cis gendered hetero looking caucasian women,” he posted. “‘I’m not homophobic but …’ nah mate, you’re dumb, and homophobic. At Least admit it.”

“I fucking love being gay,” he added, ending the post with a rainbow flag emoji.