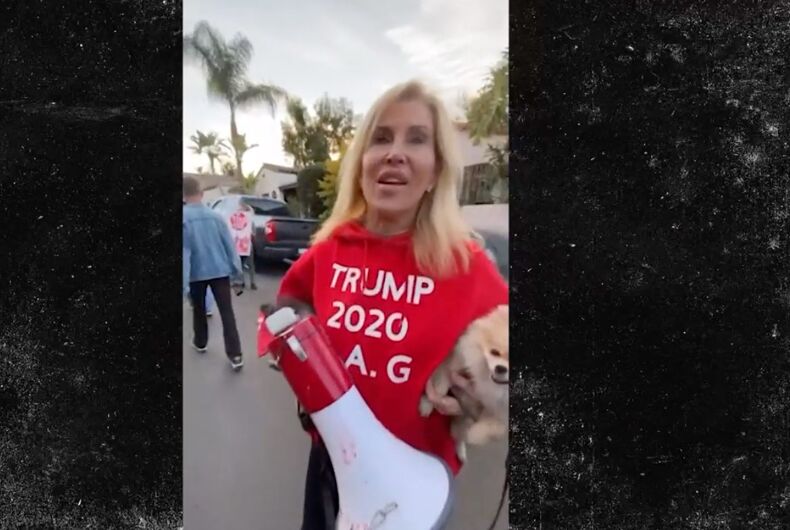 After a Trump supporter’s vile anti-gay slurs went viral, the blowback was swift and severe. And after the conspiracy theory-spouting woman was identified as Gina Michelle Bisignano, it didn’t take long for her to start claiming victim status.

Bisignano owns Gina’s Eyelashes and Skincare salon in Beverly Hills and the business rating site Yelp had to close the ability to comment and review the salon after users flooded it with fake reviews and condemnations.

“You’re a faggot,” the woman says at the beginning of the clip posted by TMZ. “I said it. I don’t give a shit. You’re disgusting. You’re a New World Order Satanist.”

After spastically responding back to various hecklers, she returns to the person filming, asking, “What are you, a guy or a girl?”

“I’ll tell you something else. You’re a Nazi and you’re brainwashed by MK Ultra.”

In a message posted on the business’s Yelp page, the company explained why they had shut down the ability to comment.

“This business recently received increased public attention, which often means people come to this page to post their views on the news rather than actual consumer experiences with the business,” the message reads. “We’ve temporarily disabled the posting of content to this page as we work to investigate the content you see here reflects actual consumer experiences rather than the recent events (even if that means disabling the ability for users to express points of view we might agree with).”

Most of the reviews were in the same vein as this user’s. “Gina gets 1 star because she thinks COVID and the deaths of healthcare workers is less important than her business of doing eyelashes,” they wrote. “Also, Gina hates faggots so this faggot is leaving a 1 star review all the way from NY. Go fuck yourself Gina.”

For her part, Bisignano’s only real comment on the issue was on Facebook where she posted “I was attacked online.”