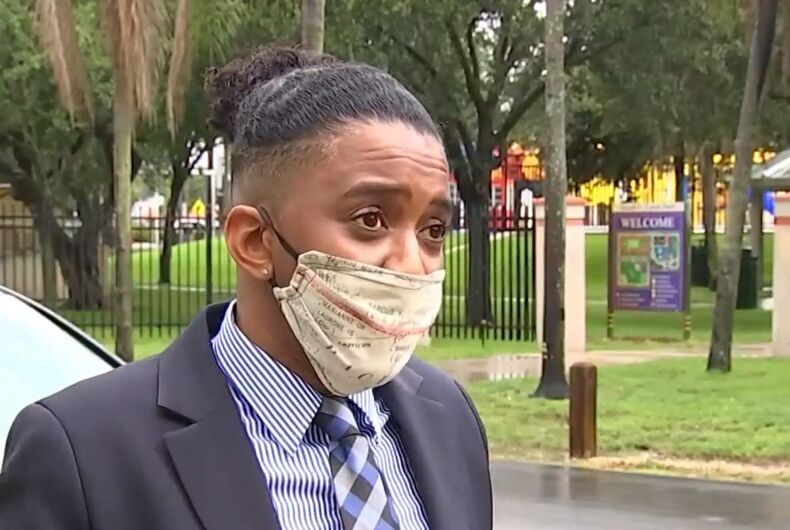 A Black gay professor said that she was yelled by a white woman for talking “over [her] lane” at a swimming pool. Pool staff called the police, who kicked her out for what she called “swimming while Black.”

Ghenete Wright Muir is a law professor at Nova Southeastern University in Fort Lauderdale, Florida, and she’s also the founder of the LGBTQ arts organization Thou Art Woman and is a member of the Gay & Lesbian Lawyer Network in Broward County.

Related: White “Karen” calls cops on gay black man who asked her to leash her dog in Central Park

Wright Muir said that she and her son Masai were swimming at a public pool this past Sunday.

“I said something to my son and the lady in the lane between us said, ‘You can’t talk over my lane,’” Wright Muir told 6 South Florida News. “I immediately asked the lifeguard if that was a rule, and she said there’s no such rule.”

She offered to switch lanes with the white woman – who was identified by Caribbean National Weekly as Lani Kempner – but that didn’t work.

“She starts to complain to the lifeguard that she needs to do something about us,” Wright Muir said. “She starts threatening her job saying she’s gonna talk to her supervisor.”

Kempner wanted the lifeguard to call the police, and they did. Police officers shut down the pool and asked everyone to get out, but Wright Muir said that the Kempner initially refused to get out.

Wright Muir said that police shouldn’t have been called in the first place just because she was talking to her son.

“With the history of police and Black people and the current climate, I believe calling the police at that point was an act of violence against me and my son.”

“As avid swimmers who are Black, we are somewhat used to the microaggressions that come with using public pools,” she wrote. “Even on this occasion, the young white man at the entrance felt the need to specify that the scheduled time ‘is for lap swimming.’ I casually responded, ‘I know, that’s why we’re here.'”