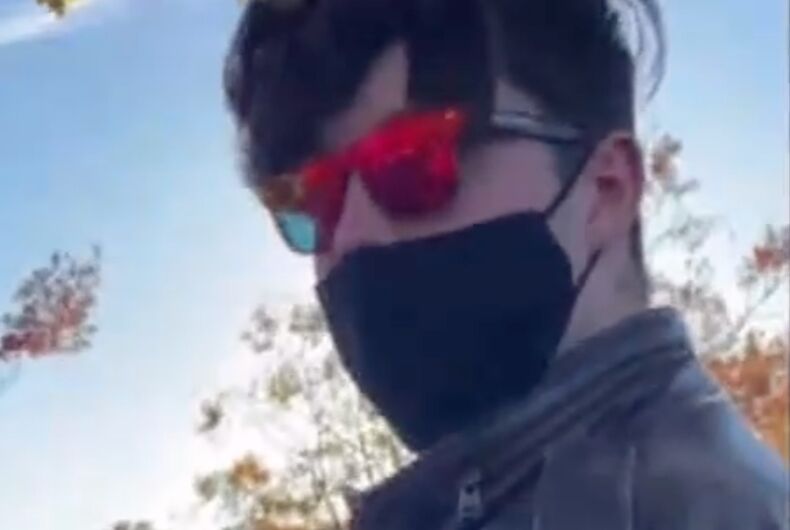 The Nazi detained in Fairfax, California for posting Nazi stickers around the city.Photo: Screenshot

A cowardly Nazi got confronted by the residents of a California town after he was busted posting antisemitic stickers around the city on lampposts and newspaper boxes.

Noah Mohan posted a nine minute video of the man to Instagram as he followed him through the town ripping down the stickers the Nazi had just slapped up.

“Yesterday I was walking around downtown fairfax with my girlfriend and puppy when we saw a guy putting up stickers all over town,” Mohan wrote in the caption to the video. “I didn’t really have a problem with the fact that someone was putting stickers up in fairfax, because most of the time there is a good message behind the stickers (like ‘black lives matter’ or something else that conveys a POSITIVE message.”

Mohan said that when he went to look, they were “pro-nazi stickers” with swastikas. The stickers said, “We are everywhere.”

“I tore the sticker off, threw it away, and followed the guy down the street with my phone for about 20 minutes telling him to get the fuck out of my town and to throw that racist shit away on the way out,” Mohan continued. “He was wearing sunglasses that had a nazi SS on them and had a nazi pin on his jacket.”

Mohan can be heard in the video telling the hooded and masked man to “let me see your face, bro.”

“You keep putting them up if you want and I will keep ripping them off,” he tells the man.

Personally, I will not let that shit slide in my town and I hope you guys feel the same way,” he wrote. “You can try to tell me ‘it’s just his ideology and beliefs, let him have his like you have yours’ but that ideology is to ‘cleanse the white race’ and that ideology says that ‘the white race is superior’. There is nothing okay about that fuckin bullshit no matter how you explain it to me.”

“I can’t believe the cops just let him go without getting charged for at least vandalism on private/ public property, but then they don’t hesitate to condemn my brothers and sisters for making art with a positive message like “black lives matter.”

Police detained the unidentified man, saying he is an out-of-town 19-year-old. While they let him go free, the case has been referred to the local District Attorney’s office on charges of vandalism and a hate crime. With coronavirus ravaging the prison population, most police departments nationwide have stopped arresting suspects for misdemeanor offenses to attempt to stop the spread of COVID-19.