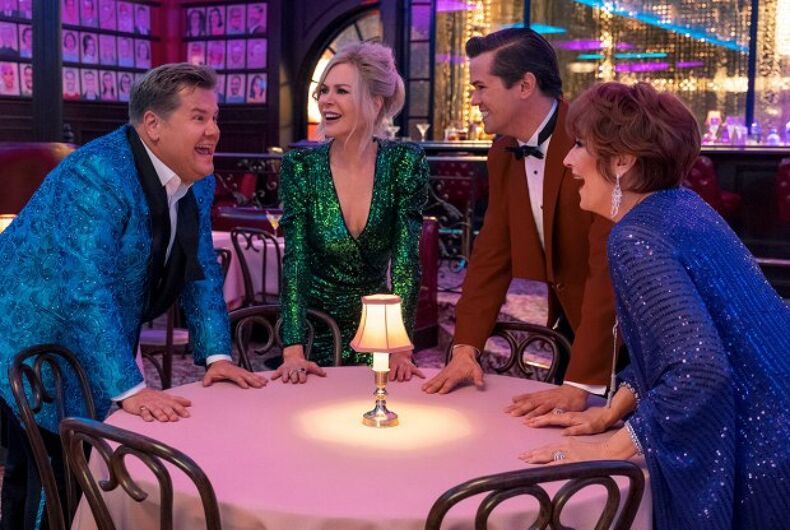 Scene from Netflix's The PromPhoto: Netflix

By now, if you had any interest at all in Netflix’s adaption of the Broadway hit The Prom, you have read one or more of the many reviews. And if you were a super-fan of the Broadway show like me, you have seen the tremendous chatter on social media about how they are different, which is better and why.

This piece is not going to be either of those things. This is about the impact of this wonderful story and how this film can play a role, as the opening song goes… in “changing lives.”

Now trending and reaching an international audience, I am thrilled that Ryan Murphy and a star-studded cast adapted the musical in a way we rarely see. Few and far between are the times that the shift from stage to screen keeps the soul of a story. It is very hard to pull off. West Side Story. The Laramie Project. Maybe a few others.

My most memorable experiencing seeing The Prom musical was in Spring 2019, when Ryan Murphy bought hundreds of seats for the evening and donated them to youth, mostly LGBTQ middle and high school groups from the New York City area. Next to me was a middle school GSA from the Upper West Side. Many of them, the same age as my daughter, were mesmerized seeing themselves represented, cheered, cried, and even booed the entrance of the not-so-supportive mother of one of the lesbian teens every time she came on stage.

With me was the NYC Pride staffer who coordinated YouthPride, an event that drew 10,000 people Central Park a month later. Needless to say, there was a performance at YouthPride of “Unruly Heart,” the song that is literally at the heart of the show. The entire cast performed at the WorldPride closing ceremony and the show captured the hearts of so many of the millions who came to NYC in June 2019.

The actors who portray the teen lesbian couple were on the cover of our Pride Guide. But I knew that there was even more this story could accomplish.

When I think about The Prom, the story, the songs, the humor and pain, and most importantly, the moment of realization by every character that we all have the capacity to change the world, I wished every queer kid in the world could see The Prom. I got my wish and then some.

Enter Ryan Murphy, who grew up in Indiana and saw the show one night and was moved to buy out a theater and fill it with kids who would not have had the chance to see this story – their story – on stage. And then he did what he is best at: getting a dream team cast to turn this into a film. The hashtag for the show was #promforeveryone. And now it really is.

To be clear – I was already a superfan. Had seen the musical several times. The “We are all lesbians” T-shirt they wear in the show and the super cool Prom track jacket are staples in my casual wardrobe. My daughter had the soundtrack memorized before she came to visit and see the show right before it closed.

The high moment for me was seeing her meet some of the cast after the show. As a teen who identifies as part of the community, I saw through her eyes how affirming this was for her. Watching my family laugh, cry and throw themselves into the love of the musical – and now the film – again showed me the power of representation.

Now I have family across the pond excited to see it and friends in the U.S. and around the world who could not wait for the movie version to stream. The impact this story can now have beyond the often inaccessible world of Broadway and into the homes of families around the world is a bright spot in a bleak year for me. It also centered lesbian lives in a historic way for Broadway.

For me, The Prom is a realistic look at how life is for many LGBTQ youth and a vision of how it should be as well. We know that youth are still thrown out when they come out, just like Emma. We know how the sting of family rejection can stay with us for decades, wonderfully portrayed in flashbacks and fantasy sequences by Barry Glickman’s character, who connects with his younger self who faced rejection and bullying as a child.

The fact that these and other issues are explored in more depth in the film is something that will touch the LGBTQ people of all ages watching this.

Come for the show, stay for the powerful lessons and truths. Walk away thinking about things differently and with more empathy.

“Love Thy Neighbor” isn’t just a fun, catchy number, it points out the hypocrisy of religion and shows how you can get that light bulb to go off over people’s heads and have them realize that what they are taught may just be flawed.

“Unruly Heart” is not simply and anthem for queer kids, but a message about self-acceptance and a cry for understanding and love that everyone can relate to.

Few do this better than Ryan Murphy and The Prom is a perfect example of how storytelling can indeed change lives. As someone who also works to tell stories and changes lives, The Prom joins my top 10 of entertainment vehicles that find that magical sweet spot – entertaining and educational, will have you singing along but also thinking the real-life issues and stories you saw long after.

Cathy Renna is a longtime LGBTQ Media activist and is currently the Interim Communications Director for the National LGBTQ Task Force.

Attacker beats gay man to the ground while shouting slurs. He’s too afraid of the cops to report it.