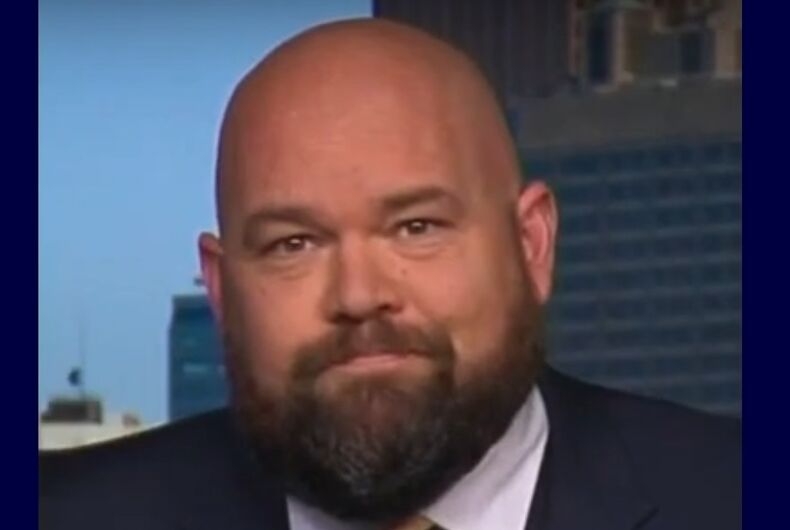 A talk radio host lashed out at Pennsylvania’s surgeon general in a transphobic and misogynist tirade, calling her “gender confused,” “a man,” and a “social engineering experiment” in a broadcast yesterday.

Conservative commentator Chris Stigall has a show on Philadelphia’s AM 990 radio station was angry about a local TV news segment about a sign in Waterford, Pennsylvania, that called the state’s surgeon general Dr. Rachel Levine a “man in a dress.”

Stigall was angry that Waterford residents had any sympathy for the transphobic harassment and derision Dr. Levine has been subject to.

The article about the transphobic sign quoted several local women who were upset about it, one of whom Stigall called a “twit.”

“This is what I mean, these people with the feels, they only have the feels for these social engineering experiments,” he said. “They never have the feels about real people leading their real lives.”

He then said that a woman interviewed in the segment can’t possibly know what it’s like to lose wages during the pandemic and that’s why she “can feel real compassion for the freak show health secretary but has zero compassion for the man or woman working for tips to feed their family and put some gifts under the tree this Christmas.”

He did not advocate for a COVID relief bill during the segment.

“Have you noticed it’s all – sorry to be sexist here… Folks, it’s all women in this story, outraged,” Stigall said, complaining that Erie News Now only interviewed women when his own employer’s line-up of talk radio hosts is all men. “It’s all a bunch of Karens.”

“What did they find, like 12-year-old girls to comment on this?” he asked, trying to diminish the women’s opinions by saying that they’re children.

Stigall went on to play transphobic jokes from The Family Guy, saying that it’s OK because Seth MacFarlane is liberal.

During the segment, Stigall complained that Erie News Now, the local TV station, “won’t even print what [the transphobic sign] says.” The sign appeared in the TV segment and in an image on the station’s website. It’s not clear why Stigall didn’t see it.

Stigall has appeared in the past as a guest on Fox News.

This isn’t the only time Levine has faced ridicule and scorn over her gender identity, but she has kept her head down and her focus on her work to save lives. A couple of weeks ago, an evangelical minister exhorted his followers to “rise up” and “chase” the doctor out of the state. He repeatedly referred to her as “it,” “a man,” and a “freak transvestite.”

The Prom is saving the world one lesbian at a time