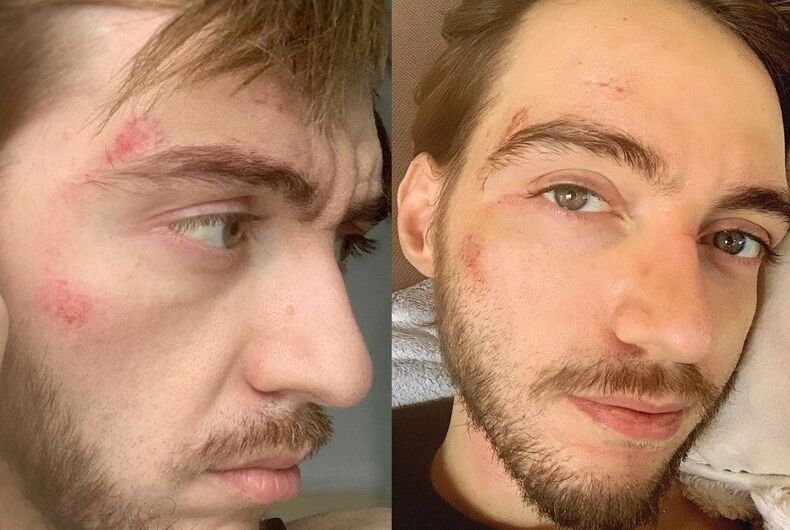 A gay man in Belgium was beaten in the street by a man he does not know in Belgium, but he says he’s too afraid of the police to even file a complaint because he has suffered so much homophobia from police officers in the past.

Éric told the French LGBTQ magazine TETU that he as attacked in the city of Charleroi at around 2 p.m. on December 11, this past Friday. He was walking in the street and was almost at his home when a man came up to him and shouted, “Big dirty faggot!”

He said that he turned toward the man but he didn’t really see his face since his glasses were fogged up because of his facemask. That’s when the man punched Éric across his head and knocked him to the ground. The alleged assailant then ran away.

“I was afraid to get glass in my eyes,” he said, remembering that his first thought was to check if his glasses were broken.

He ran home and locked the door and posted about the attack on social media. He spent the night vomiting and then went to see a doctor, who told him to take seven days off work to recover and get neurological exams done.

He told TETU he wasn’t attacked in the street when he lived in Belgium’s capital of Brussels, but now that he lives in Charleroi, things are different.

“I have never been attacked by someone that I didn’t know, but now I know that Charleroi isn’t the land of Care Bears,” Éric said, adding that he’s afraid to hold a man’s hand in public in the city and that he has already gotten publicly insulted because of his haircut.

As for why he won’t go to the police, Éric said that he was physically abused by his ex-boyfriend for six years “and the police never tried to do anything.”

He said that when he was in that abusive relationship, police told him, “You’ve got a pretty faggot face” and “Not another faggot problem.”

“I even went above their heads to complain about the police officers’ homophobic behavior (to their superiors in the police department) and they told me ‘Watch out because if you file a complaint against the police, they will never come to help you again,’ which is exactly what happened.”

He wrote that he is not willing to “take the risk of being insulted again.”

“That’s why I don’t believe in Belgian justice.”

The Prom is saving the world one lesbian at a time