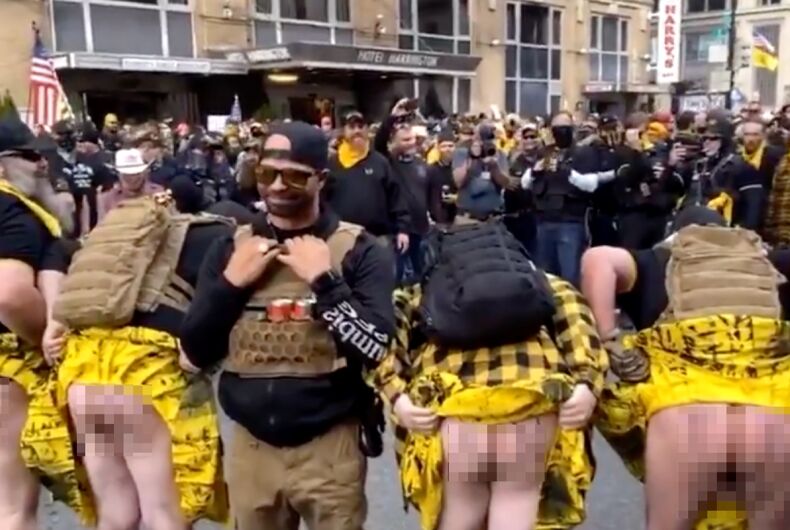 MAGA rallies have historically been chockful of strange characters and odd moments, but one of the queerest protests happened over the weekend in Washington, DC when members of the hate group Proud boys decided to make a point. They didn’t make the one they intended, however.

Wearing yellow and black kilts designed and produced by a gay man, a line of men formed up and flashed their butts to onlookers. Written in marker on their cheeks was “Fuck Antifa.” Because nothing says “straight and manly” like using a marker to scrawl a message about sex on your buddy’s ass cheek.

Related: Gay couples swarmed the #ProudBoys hashtag on Twitter & it was glorious

The Proud Boys are a far-right men-only violent organization founded by Gavin McInnis and named after a song that was cut from the Disney film Aladdin. McInnis has defended the use of the slur “faggot” in connection with assaults, calling the term “handy,” and saying, “It’s very rarely used against gays.”

Members of the group also shouted “SHAME” at far-right drag queen Lady Maga as she tried to speak during the rally.

Writing “fuck Antifa” on your ass isn’t the threat you think it is pic.twitter.com/Q28FVKVcvF

But after images of the white nationalists flashing their goods went viral, Verillas, the company that makes the kilts, quickly denounced the group and announced they were yanking the product from sale.

“Disgusted to see members of ‘Proud Boys,’ a fascist terrorist wearing our products,” the brand tweeted. “We’re LGBTQIA+ owned, operated, designed, and lived. We’re against everything they stand for. I see $750 of our gear in the picture — I just gave $1,000 to the NAACP to redirect hate to love.”

“We currently plan to try to make modifications that would be undeniably against bigotry and reclaim [the design]— and in the process offer trade-ins for any non-Proud Boy-affiliated purchasers so they aren’t unwittingly stuck with a garment with this type of reputation,” Verillas’ vice president, Justin LaRose, told Out.

“Our goal is to have everyone wearing Verillas be as comfortable in our clothes as they are in their own skin — that’s just not possible with this kilt anymore as it is,” LaRose added. “But it’s a purposely distressed kilt with an edge to it, so I think there are some things we could do, or we could have artists do, that would make it fit within our vision again and also maybe use them as an opportunity to contribute to other causes for social justice.”

“It has been a perfect storm of difficulty. But we have grown to meet it and after this weekend I feel like we are stronger than ever.”

Proud Boys in kilts. Dozens of them gathering downtown now for today’s March for Trump. pic.twitter.com/BTJWmGC6Yp

Disgusted to see members of "Proud Boys" a fascist terrorist org wearing our products. We're LGBTQIA+ owned, operated, designed and lived. We're against everything they stand for. I see $750 of our gear in the picture – I just gave $1000 to the NAACP to redirect hate to love. pic.twitter.com/eMdwW8Azrj

Today started as a fulfillment of my worst fears as a professional. This incredible community turned it all around. Verillas will be a strong voice in the chorus for progress alongside you all. Our purposed is renewed and our vision is clear. Thank you all so, so much.