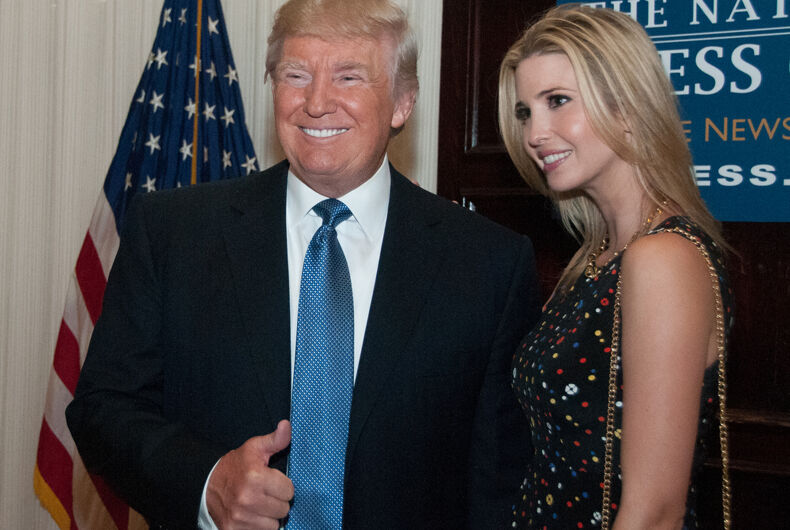 Donald Trump continues his attempted coup to overturn the election, but that hasn’t stopped the speculation about the next steps for his family. Think of it as a cross between The Godfather and Succession, with all the venality and none of the smarts.

The Trumps have always treated their ventures as a family business, and politics has been no exception. Ivanka Trump and husband Jared Kushner have been ensconced in the White House since day one, despite having no experience in government and limited skills beyond ego and a boundless sense of entitlement. At the outset of the Trump administration, people looked to them as moderating influences on Trump, particularly when it came to LGBTQ issues.

Related: More LGBTQ candidates won elected office this year than ever before

Ivanka quickly disabused everyone of that notion. “When people say, ‘Where is Ivanka and why is she silent on X, Y, Z?,’ they don’t understand how any White House works,” Ivanka told the Washington Post a year into the administration.

So with her father facing the inevitable end of his term, what’s a girl to do? Maybe try to get the same job.

It’s not that far-fetched. After all, Trump himself tried to set Ivanka up as his successor. When it came time for him to pick a running mate, Trump apparently wondered why it couldn’t be Ivanka.

“I think it should be Ivanka. What about Ivanka as my VP?” Trump asked, as reported in a book by his former deputy campaign manager Rick Gates. “She’s bright, she’s smart, she’s beautiful, and the people would love her!”

Trump was talked out of that idea, but no doubt it’s still in the back of his mind. It’s also no doubt in the back of Ivanka’s. Trump clearly thinks she’s the best of his brood–which isn’t saying much. (He also has a creepy interest in her looks.) Someone has to take over the family business, and Ivanka looks like the obvious choice. Now that the family business includes running the country, Ivanka will want that as well.

People who know Ivanka say that the idea of her running for president isn’t far fetched.

“I think she’d want to be the [first] female president,” Marissa Velez Kraxberger, who worked at Ivanka’s company for two years, told the Washington Post.  “I don’t think she’s actually ever had any interest in fashion, but everything was an angle to gain more power in whatever possible way.” Kraxberger, who voted for Joe Biden, said she wants to keep Ivanka “as far away from our political realm as possible,” adding that she’s “identical” to her father.

Ivanka’s turn will have to wait until her father decides he’s done. Trump is already planning to run again in 2024. Then again, she could take a page from her father’s book and shove Dad aside at the first opportunity to grab power.

In the meantime, Ivanka and Jared are decamping to a “billionaire bunker” in Florida. (Bunkers also run in the family.) Their former lives as members of the Manhattan elite are no longer available to them, thanks to their complicity in their father’s disastrous and destructive presidency. In fact, Manhattan is plastered with “Not Wanted” posters of Ivanka.

While she recoups in splendor in safe surroundings, Ivanka can ponder her next steps. “Ivanka definitely has political ambitions, no question about it,” one source told CNN. “She wants to run for something, but that still needs to be figured out.”

While there are other options, nothing will look as appealing as the White House. The Senate? Why be just one in 100? Run another organization, like Don Jr., who has eyes on the NRA? Not as glamorous (or profitable).

Light a candle. There’s hope on the horizon.