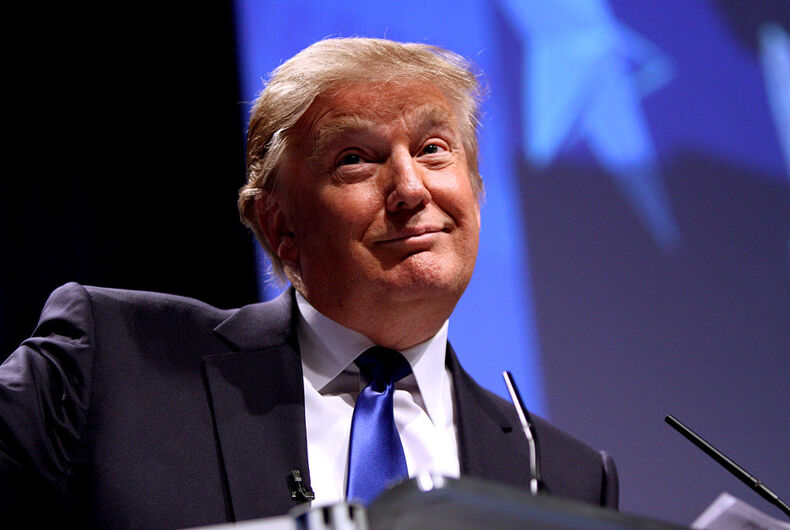 The reality couldn’t be more stark: President Trump and a Republican Congress eager to undo all or at least most of Obama’s progress toward LGBTQ equality. Starting at noon today and for the next two years (at least), we will have to live with what was once unimaginable.

But just because the Republicans are triumphant today, it doesn’t mean that they will necessarily be successful in pushing their regressive agenda. As the are soon to discover, getting things done is a lot harder than stopping them from being done. A combination of outside pressure, legal checks and internal division has the potential to stop some of the worst policies from ever being implemented.

Just because the business community prefers the GOP’s tax policies doesn’t mean that it will go along with the homophobic ones. If anyone can attest to that, it’s Vice President Mike Pence. Pence had his head handed to him by corporate America when as Indiana governor he signed a “religious freedom” law that legalized antigay discrimination. Pence eventually had to back down and was such damaged goods politically that the state Republican party was relieved to see him join the Trump ticket and not run for re-election as governor. He’s a walking object lesson in why antigay attitudes don’t fly with big business any more.

Obama appointed more than 300 judges to federal courts, including a record number of openly gay judges. Those appointees are an important check on any antigay agenda. Any restrictive policies are likely to be challenged in court. There’s a good chance that those policies could run into a stone wall there.

Governors and legislators in liberal states on either coast have already signaled their willingness to buck the conservative trend. Any attempt to roll back protections won’t just be resisted. It will be ignored. When it suited them, Republicans loved to talk about states’ rights. They are now about to find out that the argument cuts both ways. Deep blue cities and states can continue to make a huge difference by simply being better–more compassionate, more anti-discriminatory. These places already feature far better economies, health care, racial harmony and life expectancies. Let’s make sure the other side remembers that.

The polls are on our side, and they are not rigged. A majority of Americans support marriage equality. Even larger numbers believe in nondiscrimination protections based on sexual orientation or gender identity. That means the most outrageous efforts will have a hard time getting off the ground. Perhaps even more significant: majorities continue to give very low ratings both to the Republican Congress and to Trump–he enters office the least popular in the history of polling–which will limit how far he can move to the right.

Thiel hasn’t exactly been a champion of gay rights, and he does not inspire confidence when talking about the vulnerability of his own community because he has apparently never felt it. But let’s give him the benefit of the doubt for once. In his recent New York Times interview he expressed confidence that Trump won’t come after us: “I don’t think he will reverse anything. I would obviously be concerned if I thought otherwise.” Let’s hope that if that does come to pass, Thiel would have a word or one hundred with his hand-fondling admirer.

Yes, they do exist. As a reminder, seven Senate Republicans actually voted in favor of the Employment Non-Discrimination Act in 2013 (although three of them lost re-election). In the House, Rep. Ileana Ros-Lehtinen has led the small band. If the Democrats can keep a united front (always a big if with Democrats), peeling off a few sympathetic Republicans can help them throw sand in the gears of any antigay legislation.

Trump’s son-in-law is apparently the new president’s closest advisor. He’s also reportedly pro-gay. (His first cousin’s wedding was featured in The New York Times.) Kushner and his wife, Trump’s daughter Ivanka, are two of the people Trump most trusts. One word from them telling Dad that an antigay move is bad news, and the Tweetstorm will soon follow.

The Orange One cuts both ways. On the one hand, he’s never shown the kind of reflexive homophobia that his appointees have. On the other hand, he’s the master of mixed signals and contradictions and basically does what the last person he talked to suggested. Between the two, he’ll probably feed divisions and disarray in the GOP. This is a very good thing.

Look in the mirror. Voting, particularly in the mid-terms in 2018, could stop the antigay right in its track. Letting your representatives know just how you feel about bad legislation actually does make a difference. Remember how far we have come toward equality in a historically short period of time. That was because you organized, you came out, you spoke out, you voted and made a difference. Dust off that version of you. Direct action captures media and public attention. It’s all well and good to rely on the other firewalls.

But we need to make sure this is the first one built.