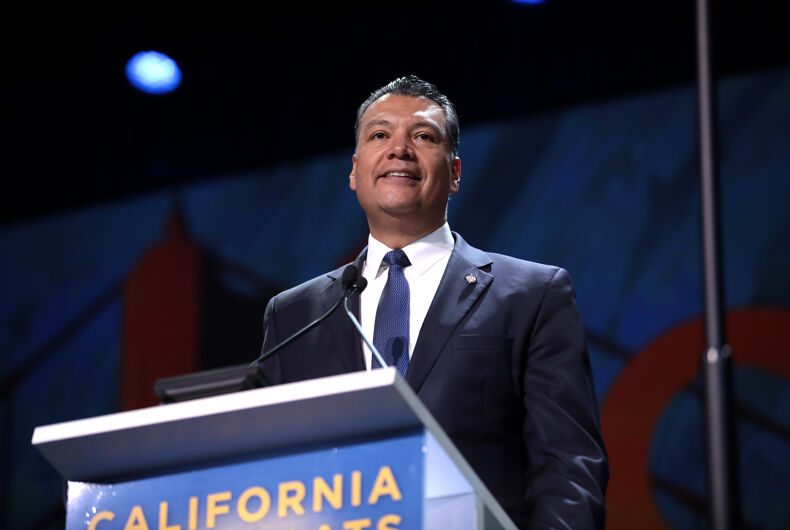 California Gov. Gavin Newsom (D) has announced who he will appoint to serve the rest of Sen. Kamala Harris’s (D-CA) term after her inauguration as Vice President of the United States.

The state’s Secretary of State, Alex Padilla, is slated to become the Golden State’s first Latino U.S. Senator. “Through his tenacity, integrity, smarts and grit, California is gaining a tested fighter in their corner,” Newsom said in his statement. “He will be a Senator for all Californians.”

Padilla, 47, is in his second term as California’s secretary of state, an elected position. Previously, he served two terms in the state senate, and seven years on the Los Angeles City Council — five of them as the body’s elected President.

As Secretary of State, he oversaw California’s elections, business operations, and public or political agendas. He is a “decades-long” associate of Gov. Newsom. In that role, he went out of his way to work with LGBTQ organizations and further support LGBTQ rights under Newsom’s agenda.

Last year, Padilla worked with Equality California to make the state the first to ever train poll workers on how to work with trans voters during election. The biggest part of the training was learning how to respond to voters whose “gender identity, expression, or pronouns don’t match their name on the voter rolls,” according to a release from Padilla’s office.

“California is proud to be proactive in protecting the voting rights of LGBTQ voters and fostering an inclusive democracy,” Padilla said at the time. The Human Rights Campaign, among other groups, praised Padilla’s leadership.

His office also supported the Drag Out the Vote initiative, and was the first state official in the country to partner with them to start the Drag Ambassador Program, which promoted voting participation and rights within, and outside of, the LGBTQ community.

Under his tutelage, the California State Archives offered a selection of historical photos and documents from the state’s LGBTQ legislative caucus, and free tours of them during Pride Month.

In 2018, Padilla took the opportunity to praise out LGBTQ staff members for the state who “make me a better Secretary of State,” he told the Los Angeles Blade. That year, he also received the LGBTQ publication Bay Area Reporter‘s endorsement for reelection.

When President Donald Trump took office in 2017 and requested data from each state’s voting records be made available, Padilla was one of several — at least 45 — secretaries of state not to volunteer millions of voter’s private information, which could have been disastrous for LGBTQ voters.

“I’m not trying to hide – I’m trying to protect,” he said, also calling the move a “hacker’s dream come true.”

California’s Senior U.S. Senator, Dianne Feinstein (D) made it clear that she wanted Padilla to receive the designation for the position. NBC News reported earlier this month that she had “conveyed her preference” to Gov. Newsom after Harris’ election.

“From those struggling to make ends meet to the small businesses fighting to keep their doors open to the health care workers looking for relief, please know that I am going to the Senate to fight for you,” Padilla said in a statement.

Equality California and other groups had advocated for Gov. Newsom to select a LGBTQ person for the position, but nonetheless named Padilla as someone who could “honorably” serve on behalf of the LGBTQ community.

Among others, Robert Garcia — the out Latino mayor of Long Beach, California — was also suggested for a time after Gov. Newsom made clear he wanted to “make history” with his appointee.

Vice President-elect Harris won election for her Senate seat in 2016, which means Padilla will be able to serve the rest of the term, which is scheduled to end in January 2023.

As an LGBTQ advocate, Padilla is going to follow in even bigger shoes, as Harris pushed for LGBTQ rights in legislation as a Senator, in addition to on the campaign trail.

Editor’s Note: This article previously stated that Vice President-elect Harris was “re-elected” to her Senate seat in 2018. In fact, Harris won election to the Senate in 2016 for the first and only time. We regret the error.