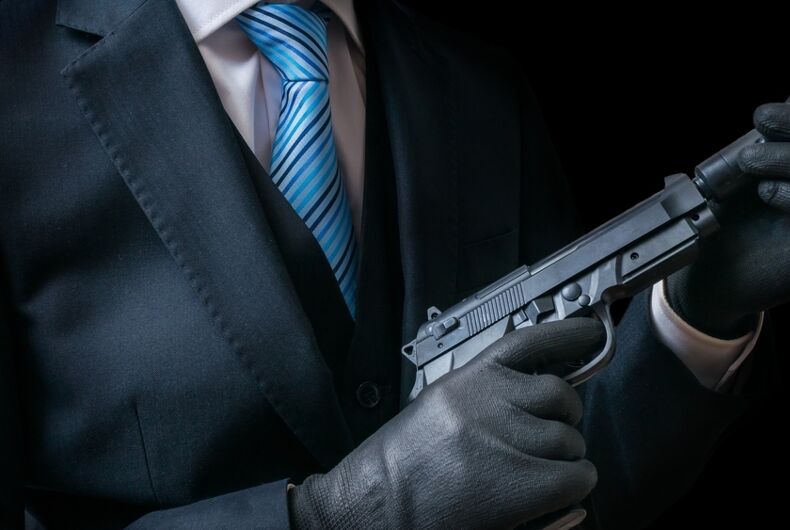 A 75-year-old Italian man has been sentenced to two years in prison after he hired a hitman to attack his son and his son’s partner. The ongoing terror campaign started when the son appeared in a newspaper with another man.

The dad reportedly paid a man 2,500 euro (approximately $3,000) to attack his son, a surgeon, and break his fingers so that he couldn’t work. It wasn’t the first time the father had hired goons to ambush the gay couple.

The problems started in 2017 when the father saw pictures of his son with a male actor in a tabloid. The son had already told his father that he was gay the year before. At the time, the father just said, “Too bad. I wanted grandchildren.”

The father then lashed out against his son and the son’s male partner. The man’s partner was severely beaten earlier this year by thugs hired by the father. The man was hospitalized after the attack. The couple’s car has also been vandalized.

The father also harassed his wife of 42 years when she decided to leave him. And the father’s harassment of the don escalated when the son intervened to stop his father from beating his mother one day.

The son told authorities that his father had him followed and heckled in the streets and that he’d been forced to change his locks and disrupt his normal routine to avoid any problems.

“Apart from the patients I knew, I was afraid to make visits, never knowing who I might meet,” he said, adding that he spent years only leaving his home accompanied by friends because he was so afraid of his father attacking him.

That led the son to finally report his father to the police in 2018. He testified that he wanted to understand why his father was attacking him and that’s why he didn’t immediately report the father.

The father even sued his son for removing his teeth without his permission. While the ridiculous lawsuit didn’t go anywhere, it added to the son’s stress.

Then the father hired a hitman in May of this year. “My son is a thug, break his fingers,” the father allegedly told the hitman.

The hitman stalked the son and his partner for two weeks but didn’t see them commit any crimes or even interact with other criminals. So he told the son about his fathers plan… after slashing the son’s tires as well as the tires on the mother’s new car.

A prosecutor told the court that the son and his mother have a “well-founded fear for their safety and that of the people connected to them, forcing them to alter their habits.”

The father “had decided to ruin [his son’s] life, breaking his hands,” Turin Mayor Chiara Appendino wrote in a note to the court. “The hands of his son, a surgeon by profession. The ‘reason’? He is homosexual. It happened in the 21st century. In the province of Turin.”

“Fortunately, the hired man refused to carry out an act as cruel as it was senseless and confessed everything to the victim who, in this way, was able to file a complaint. The father was sentenced to two years, but today will still hear the cry of yet another victim of homo-lesbo-bi-trans-phobia which, as the daily news shows, is absolutely present in our country.”

The LGBTQ organization Arcigay Torino said that the victim was targeted “because he loves another man.”

“No person should live in fear because of their sexual orientation or gender identity. Precisely for this reason, we underline the importance of a law that will protect LGBTQIA+ people from such abuses.”

The relatively lax sentence comes from Italy’s lack of a hate crimes law. The father was only charged with aggravated assault and stalking.

The Italian parliament is currently considering a hate crimes law.

Trump’s Mar-a-Lago neighbors may be able to stop him from moving there. They don’t want him either.