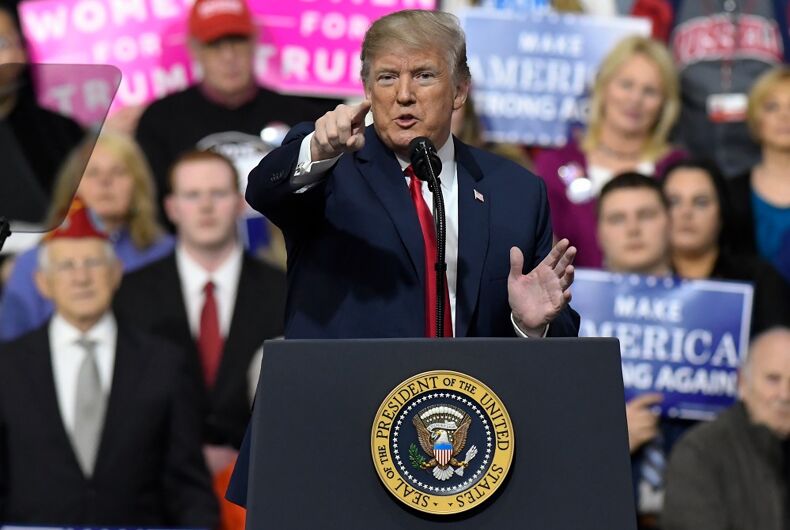 Oh, not the biggest problem imaginable, by any means.  That would be the specter of Donald Trump taking the oath of office on January 20, 2021 and everything that would flow therefrom.  Fortunately, the far-too-real possibility of that vanished into a puff of mid-morning snowflakes on Saturday.

But the world has not reverted to its January 19, 2017 state of existence.

Related: The long nightmare is over. Joe Biden has won the presidential election.

And it never will.

We don’t have the Senate; we barely have the House.  And, though there will be a handful of retirements and deaths to be sure, the vast majority of the federal judges that Trump and the Federalist Society nominated – and that Mitch McConnell consecrated – over the last four years are not going anywhere any time soon.

But over 70 million people lived through the last four years and thought Trump deserved four more in the White House. They’re not going anywhere either.

It would be wrong to say that all Trump voters are racists, homophobes, transphobes, misogynists and science-deniers.  But enough of them are that it would also be wrong to say that, even as Joe Biden and Kamala Harris take their oaths in January, America will not still be suffering from a politico-cultural metastatic cancer.  The nation has not merely had a scab ripped off; the entirety of our national skin has been. The world can see what America has become and Americans willing to do so can see it as well.

For years, if not decades, we all have harbored suspicions that the professionally-righteous and their followers are no more principled than Don Draper – that not one of their criticisms of Bill Clinton and Barack Obama would have kept them from supporting both (and John Edwards for that matter) had they been anti-LGBTQ, anti-abortion, anti-woman, anti-diversity, anti-labor Republicans.

And now we know that the only problem underlying our suspicions was that we were not cynical enough.

No person or group claiming to represent “faith,” “morality,” “a culture of life” or any of the other tele-friendly buzzwords and catchphrases after having conveniently overlooked the Trump Administration’s nonstop torrent of empirically-proven lies and blatant disregard for human life should ever again be afforded any legitimacy in the marketplace of ideas.

Yet we know they will be.

The nation has a problem and Trump was only the loudest and most visible part of it.  For the rest of my life, I will never be able to go anywhere or do anything without wondering whether individuals I might encounter are part of Trump’s 70 million – people who have no problem with what Trump and those working for him wanted to do to non-hetero, non-cis, non-white, non-native-born, non-Christian people.

And I hate to say this, but a problem even bigger than all of that is what people with the power to impose solutions will try to pass off as cures for what ails America.

No, that’s not a declaration that we need to uncritically embrace everything that Rep. Alexandria Ocasio-Cortez (D-NY) and the Squad have to offer (sure, we could do much worse, but there is room to disagree on some things).  Rather, it is a call to recognize that for thirty years the GOP has gotten 100% of what it wants when it wins and 95% of what it wants even when it loses. That’s a record that the ghosts from South Africa’s white-minority government look up at with envy.

And the Republicans are not wholly to blame.

President-Elect Biden was willing to utter “transgender” in his victory speech on Saturday night – but he has also frequently spoken of healing and reaching across the aisle.

The latter is a worthy aspiration – but not at all costs.

Three days before the victory speech Claire McCaskill dog-whistled “transsexual.”  (I’m not language-policing here; the whistle would be no less canine if she’d said “transgender”).  She has since given the appearance of apologizing for blaming “gay marriage and the right for transsexuals and other people who we as a party have tried to quote-unquote look after” for Biden’s successful presidential campaign having no coattails.

“Our party should never leave behind our fight 4 equality for trans people or anyone else who has been marginalized by hate,” she later tweeted.  “My record reflects that.”  Surprisingly, it does.  While in the Missouri Legislature she voted for the state’s trans birth certificate statute in 1984.  Of course, I question whether that’s what she meant in 2020 and whether she even remembers her 36-year-old vote.  (Most LGBTQ activists and historians like to pretend that such laws – and, in turn, the votes for them – never happened, so why should she be any different?)

McCaskill should be presumed to have meant what she dog-whistled and we need to prepare for the reality embodied by a Democratic Party that is still in the stranglehold of do-nothing, middle-of-the-roaders who are willing to compromise just for the sake of compromising – and on any and all issues both when it is not wise and even when it is not necessary.

One of the promises that candidate Biden made was for passage of the Equality Act, the most recent versions of which have been trans-inclusive – as were the last few incarnations of the Employment Non-Discrimination Act.

Trans people remember the ones that weren’t – and the ever-chameleonic rationale set forth to convince us to embrace Rhode Island Avenue‘s revealed wisdom.

One of my many criticisms of the HRC-Barney Frank strategy of pursuing statutory equality for cis LGBs and leaving trans rights to the chance of a favorable judicial interpretation of Title VII was that those legislators with the actual power to make that compromise could just as easily decide that a legislative compromise clarifying that the word “sex,” as used in federal law, does not include trans people might be a necessary price to pay to get the stripped-down legislation over the finish line.

So many of the things that the Supreme Court does are interpretations of the Constitution that can only be altered by the Court itself or by amending the Constitution.  But Bostock v. Clayton County?  That was just an interpretation of a statute – something that the thinnest of Congressional majorities in Congress can erase.

At first glance, it would seem that Mitch McConnell would never allow any version of the Equality Act to receive a Senate floor vote.

But we know that he represents neither the state of Kentucky nor the people of America, but instead the Republican Party – an entity that knows how to play the long game of political beanball. And if he thinks that ripping the LGBTQ community apart by allowing a trans-free Equality Act – one that wipes out the pro-trans portion of Bostock v. Clayton County – to happen will ultimately benefit the GOP by instigating a civil war within the Democratic Party, he’ll ram it through quicker than he did Amy Coney Barrett’s illegitimate nomination.

How many of you really thought that Donald Trump would ever become president?

Our times are still quite dangerous.

We close our eyes to that reality at our own risk.