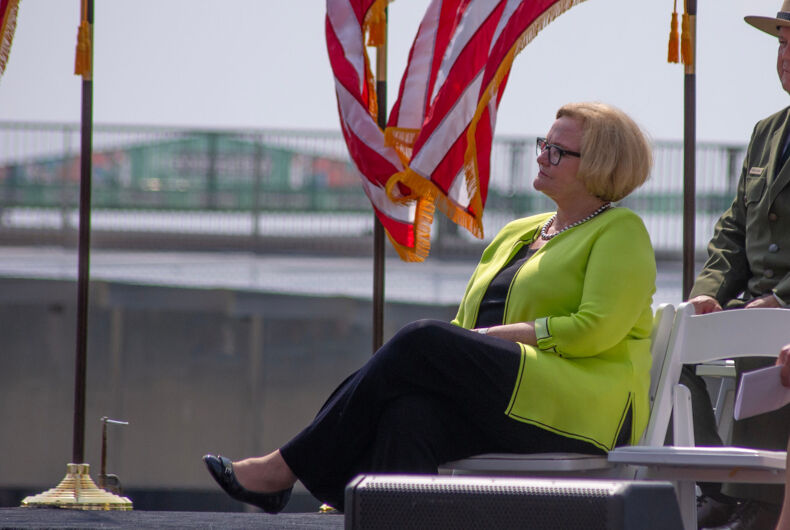 Saint Louis, MO—July 3, 2018; Senator Clair McCaskill sits on stage with flag in the background at the grand opening of the Gateway Arch National Park and museum.Photo: Shutterstock

Former Sen. Claire McCaskill (D-MO) may not be in office any longer, but the moderate has found a second political life as a pundit for MSNBC. While she has loosened up considerably in her views on social issues, her conservative politics still shine though sometimes.

McCaskill blamed “gay marriage” and “right[s] for transsexuals” after the pollster-promised “blue wave” failed to materialize during a spot with MCNBC anchor Brian Williams. Within hours, she apologized on Twitter.

“When did the Democrats become the Whole Foods party when the nation, I insist, is still a Ralph’s country, a Piggly Wiggly country, a Safeway country, and so on?” Williams asked during the spot.

“I think it began around cultural issues,” McCaskill responded. “The Republican Party, I think, very adroitly adopted cultural issues as part of their main theme, whether you’re talking guns or issues surrounding the right to abortion in this country or things like gay marriage and the right for transsexuals and other people who we as a party have tried to quote-unquote look after and make sure that they’re treated fairly.”

“As we circle those issues, we left some voters behind and Republicans dove in with a vengeance. And you’ve seen this shift. You saw it in the South. I saw it in the rural areas of my state.”

Within hours of the appearance, McCaskill apologized on Twitter for using a “hurtful term,” saying she was “tired.”

“I’m so sorry I used hurtful term last night,” she tweeted. “I was tired,but never a good excuse.People have misinterpreted what I was trying to say. Our party should never leave behind our fight 4 equality for trans people or anyone else who has been marginalized by hate. My record reflects that.”

I’m so sorry I used hurtful term last night.I was tired,but never a good excuse.People have misinterpreted what I was trying to say.Our party should never leave behind our fight 4 equality for trans people or anyone else who has been marginalized by hate. My record reflects that.

McCaskill held back civil rights legislation during the Obama administration, regularly arguing that LGBTQ rights should take a back seat to other more “mainstream” issues. But when legislation made it to the floor, she had a record of voting in favor of LGBTQ equality when it mattered.

Respectfully, it wasn't *just* that you misspoke (at least for me). It was that you seemed to endorse sacrificing emphasis on crucial issues and protecting vulnerable communities in exchange for appealing to "culturally conservative" white voters.

That was deeply disconcerting.

Speaking only for myself, I appreciate this, but I also want to point out that part of the hurt here is the idea that trans people aren't part of the working class or leading in the public square. We're equal partners putting in the effort. That should be recognized.

It’s not adultery if your straight spouse has gay sex

Angie Craig is the 8th out candidate to win a seat in the U.S. House