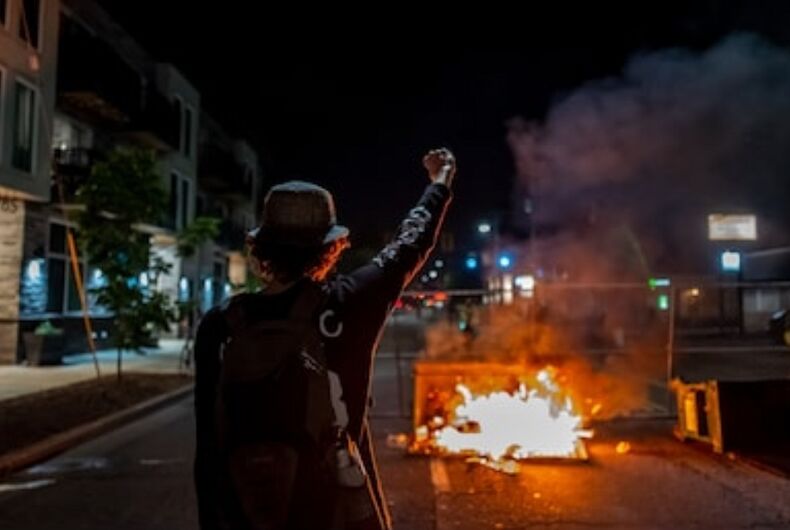 A protestor in Portland, OR raises a fist during nights of anti-fascism and racial injustice protests.Photo: Shutterstock

During the late 1940s, researchers, led by Theodor Adorno, studied the historical conditions that paved the way for the rise of fascist regimes in the 1920s and 1930s, World War II, and the Holocaust. They theorized about individuals who would support the growth of fascism.

They suggested that people of a certain personality type, which they labeled the “authoritarian personality,” were most ripe for extremism, in this case, those most susceptible to anti-Jewish prejudice and anti-democratic political beliefs.

Related: LGBTQ voter turnout was at an all-time high this election & support for Trump skyrocketed

They relinquished their autonomy and critical thinking faculities for the prospect of going back to a future reminiscent of a (mythic) idealistic past of economic, political, social, cultural, and personal security, where their “ingroup” won and led, and those “outgroups” served obediently and acquiesced to “ingroup” needs and demands.

They pledged obedience and allegiance to a powerful leader or social institution. In other words, they surrendered their freedom for the promise of social and personal security, which usually includes the suppression of those outside the circle, the “others.”

So why did so many Americans vote to reelect President Donald Trump, a dangerous demagogue?

He continued to incite hatred and violence at his rallies, and fear, stereotyping and scapegoating all Muslims and so-called “illegal aliens,” promised to punish women who have had and their doctors who have performed abortions, argued that he would continue to restructure the Supreme Court to an ultra-conservative majority, which would, thereby, reverse both Roe v. Wade and marriage equality.

And he perennially pledged to “Make America Great Again.”

“I am your voice! I alone can fix it. I will restore law and order.”

Trump never asked anything of his supporters other than their full loyalty by placing their total faith in him. And the authoritarian personalities followed brown-shirted in lock-step.

Trump asked his followers to wax nostalgic to “wholesome” television shows: The Donna Reed Show, 7th Heaven, and Leave it to Beaver, all reflecting the mainstream popular image of the U.S.-American family as white, middle class, with a nice home in the suburbs, and with all family members accepting their assigned raced and gendered scripts.

Democracy, though, demands an educated electorate. Democracy demands responsibility on the part of the electorate to critically examine their politicians and to make truly informed decisions. Democracy demands of us all never to relinquish our freedom and authority for some promise of comfortable security by returning to a fairy tale past.

When we relinquish our freedom for security, this gives rise to: “I don’t have to think. I’m a Trump supporter.”