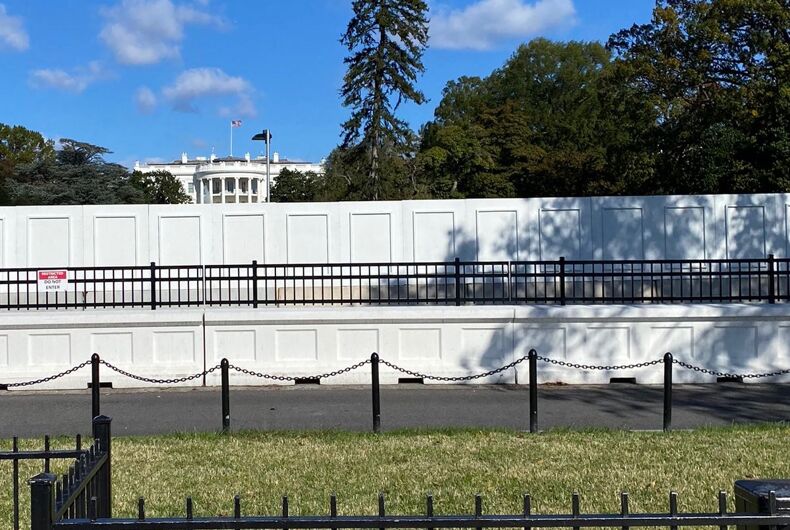 The White House is surrounded by a "non-scalable" barrier before Election Day.Photo: Twitter/@katercon

As I write this, there is a helicopter circling my Washington D.C. neighborhood so low that the force from the rotors is shaking our windows. The U.S. Department of Energy’s National Nuclear Security Administration says it is measuring background radiation in the city as part of “safety preparations” before Inauguration Day.

The president has called in 250 National Guard members to “protect” the White House on election night and is constructing his most ironic wall – a giant fence around the presidential residence and a nearby park. Welcome to Election 2020 in D.C.

I’ve lived in Washington, D.C. for over a decade. This will be my third presidential election in the nation’s capital.

Businesses citywide are boarding up their windows. While I’ve lived here, my local CVS hasn’t been covered in plywood to prepare for potential rioting after residents cast their votes. A quick check with neighbors confirms that it’s unprecedented.

“I can tell you that even through the anti-Vietnam War demonstrations and the race riots of the 1960s, we never before had to board up buildings in advance of an election,” out attorney Bill Feldman said. “It is tragic.”

It’s eerie seeing all these buildings in downtown DC boarded up on #Election2020 eve pic.twitter.com/n7F28DCHJv

The fences that go up when Trump gets afraid pic.twitter.com/6xYyo2lkjH

The winds of change are sure blowing wild and free downtown. Non-scalable walls going up around the White House. Also going up: the National Christmas Tree @PoPville #Election2020 #BobDylan pic.twitter.com/pdbS4U8LQl

Fear of violence has rippled through the city. No matter which candidate wins the election, the other side’s supporters are likely to wreak havoc in the streets.

And that doesn’t even factor in the far-right militia members and white supremacists armed and goaded on by the president. They’re itching for a fight and determined to mess up the system.

Activist Mike Rogers says he’s “just a little worried,” but admits “[I] wish I did the firearms training.”

Great time to live in DC and own a dog that barks at helicopters.

Let’s see, he’s locking himself in the White House behind a giant fence, encouraging his supporters to violence, openly talking about declaring victory and legal challenges, it couldn’t be any more transparent where this is all going could it

“I am looking forward to an orderly election tomorrow, which will eliminate the need for a violent bloodbath.” #Election2020 pic.twitter.com/cgDpIrpJCQ

George Washington University advised students to prepare “as you would for a hurricane or snowstorm that would prevent you from going outside for several days to grab food or order takeout.”

“We recommend that you have at least one week of food, supplies, and medicine for your room.”

The president, who mocked Democratic nominee Joe Biden for “hiding in his basement” from coronavirus and tweeted an edited image of the former vice president to make it look like he was alone at home, last had a giant fence constructed around the White House as protests and riots over racial injustice swept the nation.

Trump was embarrassed after it leaked that he had retreated to an underground bunker, cowering from the wrath of the protesters. He later had peaceful demonstrators outside the fence gassed by government agents so he could stride across a nearby park for a photo opportunity in front of a church holding a Bible.

He plans to host around 400 people at the White House on election night, behind his “non-scalable” fence.

The White House on lockdown: A federal law enforcement source tells NBC that beginning tomorrow, crews will build a “non-scalable” fence to secure the WH complex, Ellipse and Lafayette Square.

250 National Guardsmen have been put on standby, reporting to Metro Police officials.

Will attendees have to click the same waiver as rally goers? pic.twitter.com/kp0HjLOy3F

In all the years of elections in the US, we've never had to erect a fence around the White House or board up windows in DC or NYC. Maybe you should remember whose watch that happened on, when you vote tomorrow. #VOTE

Joe Biden leads Donald Trump in final polling, but can he win the Electoral College?