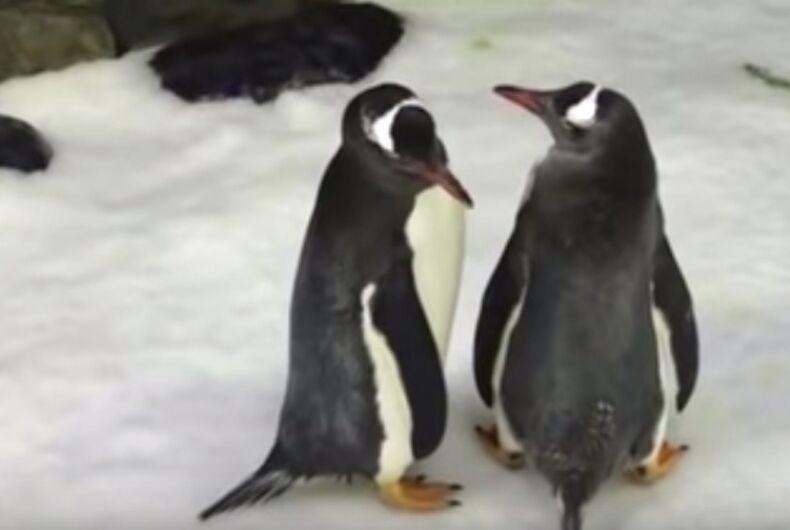 Sphen and Magic, the gay penguin couple from Australia that captured the world’s heart, are at it again. The two male penguins successfully hatched an egg two years ago and raised the chick, Lara, into adulthood.

Now they’ve hatched another egg – and Lara and her partner set up her own nest (called a “clutch”) in preparation for hatching their own chick.

Zookeepers gave them the egg when they noticed the pair making a clutch right on time for the spring/summer mating season. Gay penguin couples are frequently given eggs that other penguin parents aren’t caring for or if multiple eggs are laid by one pair of birds.

“If one of our pairs has too many eggs or are not good at looking after their eggs, we will sometimes foster these eggs out to other pairs like Sphen and Magic. We gave Sphen and Magic an egg to incubate as they have proven to be good parents in the past,” a spokesperson for the SEA LIFE Sydney Aquarium said.

The zoo’s penguin supervisor Tish Hannan told 10Daily.com, “They have the neatest and largest nest in the colony and when we noticed that another couple were struggling to incubate two eggs at the same time, we made the decision to foster the second egg to the power couple of the colony.”

“Just like our other Gentoo parents, Sphen and Magic are attentive and incredibly caring and we feel privileged to have such an amazing duo in our colony.”

The still-unnamed chick is reportedly in good health.

Lara, meanwhile, isn’t quite ready for motherhood, but she will be by the next mating season.

“Lara is now two years old and surprising us every day with how independent she is,” the aquarium spokesperson said. “Despite still being relatively young, she attempted to take part in this year’s breeding season. She and her partner set up a nest and carefully watched over it but unfortunately weren’t successful in hatching an offspring.”

“We look forward to seeing how she goes next year and whether she’ll give Sphen and Magic a little grand penguin chick.”

California is named after a Black lesbian queen