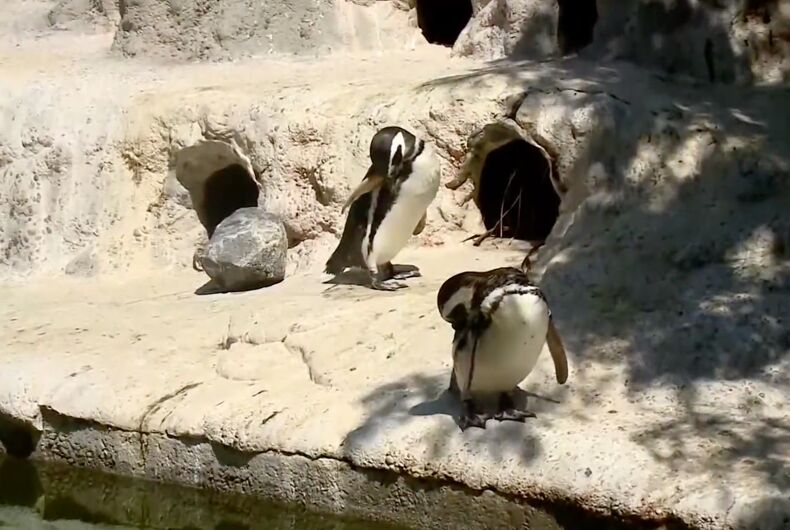 Eduardo and Rio are the best parents at the San Francisco ZooPhoto: Screenshot

You won’t find them waddling down Market Street this Sunday, but a pair of male Magellanic penguins at the San Francisco Zoo are already standing up for Pride this month in their own special way.

The duo, Eduardo and Rio, serve as surrogate daddies in one of the most successful breeding programs for the species of penguins in the world. The pair have become so good at their duties, they’ve become the go-to couple for raising penguin chicks at the zoo, according to Anthony Augello, the SF Zoo’s Assistant Curator of Birds and Reptiles.

“Anytime we have an egg that’s really valuable for the species survival plan, we automatically put it with our foster same-sex couple,” Augello told KPIX-TV, “because they’re fantastic parents.”

The pair have raised four penguin chicks over the last three years, with their current adopted chick currently in what the zoo calls “finishing school.” It will take part in the zoo’s “March of the Penguins” with other chicks in July.

Magellanic penguins, as the name implies, inhabit the area around the Strait of Magellan, rather than the chilly lands of Antarctica that many associate with the species. As a result, the climate of San Francisco proves ideal for these flightless birds.

San Francisco’s program has fledged 206 penguin chicks since 1984, and participates in worldwide efforts to help the Magellanic penguin survive.

The birds themselves are known as very sociable, as well as very diverse in personality and disposition. The same is true for Eduardo and Rio. While Rio is known for being the calm partner of the two, Edurado is something quite different.

“He’s very flamboyant,” said Eva Solano, a penguin specialist at the San Francisco Zoo. “He likes to just, sort of, be seen. He is completely fabulous. They both are.”

The zoo staff looks at the pair — and the colony overall — as a model for a tolerant world.

“See, here’s the thing. Here’s what we can learn from nature,” said Augello. “No one’s sitting there putting parameters on this. They just do what they do. No one’s judging.”

“This whole colony gets along. No one’s treated any differently,” Augello added, “so they don’t really put titles on things like we tend to do.”

Penguins seem to often have same-sex couplings. In at least one aquarium, the Oceanworld Aquarium Dingle in Ireland, they have more homosexual penguins than straight ones.

Pete Buttigieg was one of the stars at the Democratic Debate. Joe Biden wasn’t.