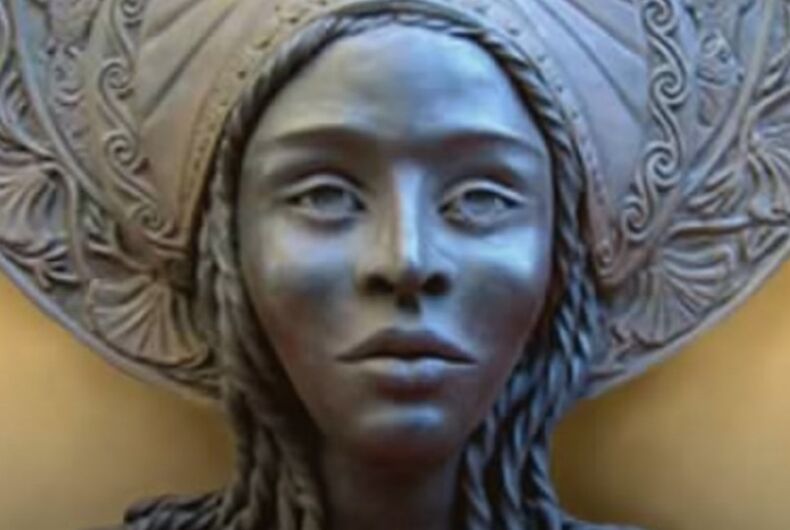 Unbeknownst to most people, the state of California was named after Calafia, a fictional Black queen who ruled over a mythic all-female island of Black women just off the coast of Asia. She used an army of flying Griffins to fight Christians at Constantinople and has become an interesting yet little known literary figure ever since.

In 1530, when Spanish conquistadors Hernán Cortés arrived on what is now known as Baja California on Mexico’s west coast, he named the land “California”, after the name of Calafia’s island in Las sergas de Esplandián (The Adventures of Esplandián), a 1510 chivalric novel series written by Garci Rodríguez de Montalvo.

In Montalvo’s story—which was a bestseller in its time—Calafia is the strongest, most courageous and beautiful woman in the world, a pagan queen who rules over an island believed to be “very close to the site of the Terrestrial Paradise” (the Biblical Garden of Eden). The island reportedly had steep cliffs, gold as its only metal in existence, and legendary creatures, the likes of which had never been seen before.

Calafia is reminiscent of Amazon queens from ancient Greek mythology who ruled over all-female societies of warrior women. Although Greeks considered the Amazons as heterosexual, modern-day writers have explored the likelihood of lesbian relationships among them.

While the island’s all-Black residents were said to have sex with men, they didn’t seem to have much affection for them. They abducted men during raids in nearby ports, had sex with them for procreative purposes (killing male infants and keeping the females), and then fed the men to the griffins, large flying creatures with the body of a lion and the head and wings of an eagle. These women fed so many men to the griffins that sometimes the birds weren’t hungry for man-flesh at all and would simply fly off with the men in their talons to drop them to their deaths just for fun.

When Calafia learns that Muslims are battling Christians at Constantinople, she decides to join the Muslims, not because she particularly hates Christians but because she thinks participating will win some adventure, riches, and fame to break up her kingdom’s somewhat humdrum existence of pillaging, abducting and feeding men to the griffins.

The battle doesn’t go so well for her. For one, the griffins have never been used in battle and they start indiscriminately attacking everyone, even her own warriors. Secondly, it turns out that gold doesn’t really make for strong armor and many of her women discover this unfortunate reality as scores are injured in battle.

With great losses on both sides, Calafia and another warrior agree to fight Christian King Amadis and his son Esplandian directly to determine the winner. Eager to make impress the king and his son, Calafia dresses in a golden robe adorned with jewels and a large headdress. But upon meeting Esplandian, she pretty much falls instantly in love with him, a symbol of how Christianity can win over even the most violent pagan.

The duo end beat Calafia in battle, and Esplandian ends up marrying another woman — because he’s not into pagans. Calafia ends up marrying a different handsome Christian knight named Talanque and promises him that they can rule California together as the island will finally allow men to live peacefully alongside women.

In 1862, U.S. historian Edward Everett Hale concluded that the novel was the origin of the name California seeing as it was a best-seller in its time and reflective of the Spanish longing for gold, glory, and God that defined Spain’s colonial period. Hale wrote that when Cortés reached Mexico’s western shore, he and his explorers incorrectly thought it was an island just East of the Indies, the exact same spot that Calafia’s island was said to be in the novel.

While Calafia isn’t explicitly lesbian in Montalvo’s novel, modern historians like gay historian Bill Lipsky have said that the novel follows patriarchal and heterocentric notions that strong non-Christian Black women who prefer the autonomous company of other women are objects to be conquered, converted and forced into heterosexuality by stronger, godlier men.

As cultural writer Abeni Moreno wrote, “Queen Calafia is a representation of all California women, women of color and women of the LGBTQ community. By recognizing and valuing the original aspects of Calafia’s character: intelligent, thick-bodied, lesbian, biracial, a leader, strong and beautiful, her re-appropriation can reverse the colonized gaze of Montalvo. As a result, Calafia becomes a positive image of women, and we reclaim her as the mother of California.”