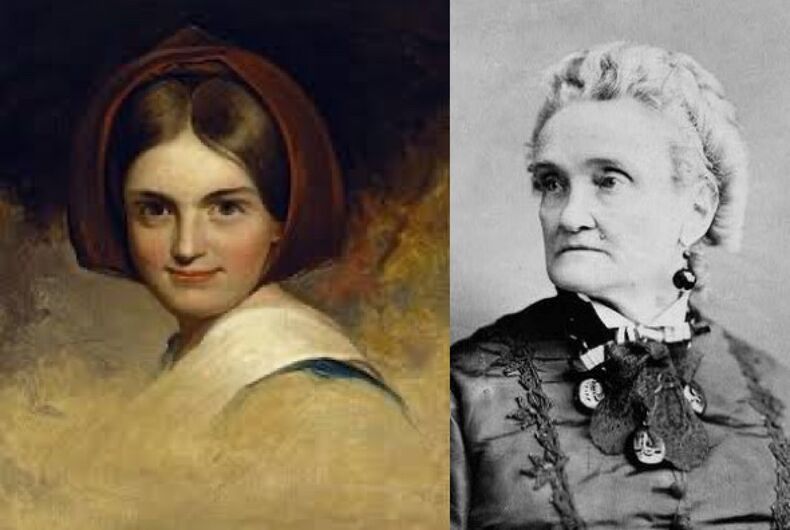 Charlotte Cushman (1816-1876) was the greatest American actress of her era, a theatrical superstar and a gender-nonconforming lesbian who worked on stages in the U.S., Britain and Rome throughout the mid-19th century.

For over four decades, she was seen by millions. Tall, strikingly handsome and highly charismatic, Cushman charmed women across two continents from the stage and her drawing rooms. During the time when women frequently played both men’s and women’s roles, Cushman became known for her “breeches roles,” playing men on stage.

Her Lady Macbeth launched her career, but it was her portrayal of Romeo in Shakespeare’s most popular play, “Romeo and Juliet,” that was considered one of the greatest of any actors, male or female, of her era.

Cushman was so beloved and admired that when she retired from the stage, her farewell ceremony was described as “the most spectacular in the history of the American theater. Thousands came in her honor to see fireworks and a candlelight procession through the streets of New York.”

Even today, theater awards and scholarships are in her name, like the Cushman Theater Award in Philadelphia.

On stage Cushman’s powerful presence led women to write her swooning fan letters, many of which remain. Offstage, she attracted beautiful and talented women in the arts and letters.

Her career made her quite wealthy, and in the 1850s, she established a feminist arts colony in Rome for writers and artists — including the most famous American woman sculptor of the period, Harriet Hosmer and African-American artist and sculptor Edmonia Lewis, both lesbians. Cushman sponsored the work of many talented women, including Lewis and sculptor Emma Stebbins, who would be her last partner.

Unlike many women of the period who disguised their lesbian relationships, Cushman was open about her love affairs and became known as a polyamorous heartbreaker, who often maintained more than one relationship at a time. She had several long-term relationships, which she considered marriages, as well as short-lived affairs.

Cushman’s impact on the women she loved was so intense that one of her early lovers was said to have died of a broken heart when Cushman ended their engagement, and another sued her for palimony when she discovered Cushman was having an affair with another woman.

The backstory of the gender-defying actress

Lisa Merrill — author of the 2000 book When Romeo Was a Woman: Charlotte Cushman and Her Circle of Female Spectators, the definitive biography of Cushman — said in an interview with Tim Miller:

“Cushman left literally thousands of unpublished letters, mostly written to and from the women she loved. Yet the historical record of her life seemed deliberately to overlook, dismiss, silence or trivialize her achievements and the importance of women in her life.”

Cushman was born July 23, 1816 in Boston. She was trained musically and had a contralto voice. Her father died suddenly when she was 14, leaving her, her mother and four siblings in financial ruin. That’s when Cushman decided to leave school, where she was a gifted student, and pursue a musical career.

In 1834, at age 17, she began performing with other famous women opera singers. After some success, she traveled to New Orleans on tour only to have her voice fail from being strained in mature roles at too young for her age. Her mentors advised she become a stage actor, and her first acting role was as Lady Macbeth in 1835. Cushman was only 18, but she continued that role in New Orleans, Boston and Albany to huge critical success.

Soon after, Cushman began her period of “breeches roles,” in Romeo and Juliet, sharing the spotlight with her younger sister Susan. Susan Cushman was married at 14, then abandoned by her elderly husband when she became pregnant. Charlotte took her in and supported her, even adopting her son, Ned.

Eventually, Charlotte lead Susan onto the stage where the two performed the lead roles in Romeo and Juliet — Charlotte as Romeo and Susan as Juliet.

The critics went wild for the leading sisters.

In one of the ironic contradictions of the era, the reason women frequently played men’s and women’s roles on stage was to quell any notions of impropriety between men and women actors. Passion between two women was not just accepted, but exalted and seen as charming; no ideas about real sensuality or sexual passion between two women existed. What’s more, men flocked to the theater to see women in breeches roles where their legs were exposed.

It was within this altered social construct that Charlotte Cushman thrived as both an actor and a lesbian lover.

“What was especially intriguing to me was the range of women and men who were apparently drawn to [Cushman’s] power, especially in cross-dressed roles like that of Romeo, one of her most famous. Although she was not the first female Romeo of her era, she was undoubtedly the most successful. When Charlotte Cushman and her sister Susan first played Romeo and Juliet for British audiences in 1845, the reviewer from The London Times stated enthusiastically that, ‘It is enough to say that the Romeo of Miss Cushman is far superior to any Romeo that has been seen for years.’ Critics from the major London newspapers found Cushman believable as Romeo, the man, rather than Romeo the woman playing the man.

In the U.S. and Britain, the women’s rights movement — the first wave of feminism — was intensifying. Cushman became an iconic figure of feminist strength while also, ironically, being considered by men to be utterly sexually chaste.

In 1889, Lawrence Barrett delivered a lecture trying to explain her success. Miss Cushman, he said, was ‘a woman of weird genius, somber imagination, great sensibility and celibate condition’ who had been ‘victorious by force rather than by sweetness.'”

Celibate condition? Not so much.

Cushman was a real-life Romeo as well

While in Philadelphia and already famous at 25, Cushman sat for a portrait by the painter Thomas Scully. It was during these sittings that Cushman met, wooed and bedded Scully’s daughter, Rosalie.

Rosalie Scully was herself a painter and had been commissioned to do landscapes (women were prohibited from life drawings at the time) in New York when she was only 19. She also painted miniatures for Charlotte.

After they met and began to spend time together, Cushman and Rosalie became romantically involved and exchanged many passionate letters. In her diary in 1844, Cushman wrote of wanting to kiss Rosalie so passionately she would “press the breath out of her body.”

In November 1844 Cushman left Philadelphia to go on an English tour. She did not invite Rosalie to come with her, but the tour did not end the affair. Instead, the discovery by Rosalie that Cushman had become involved with another woman was the final straw. Rosalie fell into a severe depression — diagnosed as a “broken heart,” and she died a few months later in 1847 at the age of 29 of a fever.

Tales of drama and love from Cushman’s female art colony

While her move to Britain had wrecked her relationship with Scully, Cushman’s career expanded dramatically. She was a huge success on the English stage, and it was there that she met Matilda Hays, a British writer, journalist and part-time actress.

The couple embarked on a tempestuous relationship that would last for a decade. Cushman and Hays were public about their relationship and would go to dinners and events wearing similar dresses and holding hands. They were recognized as a couple — yet still perceived as “chaste.” Elizabeth Barrett Browning, herself once the subject of rumor for her relationship with the younger Robert Browning, called the Cushman-Hays relationship a “female marriage.”

In 1852 Cushman decided to retire from the theater — not for the final time, however — and moved to Rome. It was here that Cushman created her arts colony, which she called a “household of jolly bachelor women.” That group included Hays, Hosmer, Lewis, Stebbins and writer Grace Greenwood, among others.

It was also a site of much lesbian drama, with revolving lovers among the women living there, including Cushman and Hays.

The History Project’s 1996 Public Faces, Private Lives exhibit described this enclave as “a group of highly mobile, independent women [who] began enjoying an international transatlantic lifestyle that now seems strikingly modern. These women were respected members of the art world, earned large incomes, and kept company with the intellectual and moneyed elites of the time.”

William Westmore Story called it “a Harem of emancipated females.” Henry James called it “The White Marmorean Flock,” in a roman a clef.

It was in Rome that Cushman used her now-international fame and wealth to promote the work of her women artist friends, including Lewis and Stebbins. Stebbins was one of the most famous American sculptors and her “The Bethesda Fountain” is at the entrance to Central Park.

It was in Rome that Cushman fell in love with Emma Stebbins and her relationship with Hays ended — although not completely by Cushman’s choice.

Hays had become involved with Hosmer in 1854 and left Cushman for her. Then the couple got back together the next year, with Hays moving back in with Cushman. But in 1857, Cushman began having an affair with Stebbins.

One night while Cushman was writing a note, Hays walked in on her. Suspecting that the note was to Stebbins, Hays demanded to see it. Cushman said that the note was not to Stebbins but refused to give it to Hays. A fight ensued in which Hays chased Cushman around the house, pounding her with her fists. The altercation ended the couple’s relationship and Hays moved out. She then sued Cushman, stating that she had sacrificed her own career to support Cushman’s career and therefore was due reimbursement — a modern palimony lawsuit. Cushman paid her an unknown sum and the couple sundered their relationship permanently.

Emma Stebbins then moved in with Cushman. The couple lived together until Cushman’s death in 1876. In 1858, Cushman embarked on a tour of America starring as Hamlet, and billed as “a lady universally acknowledged as the greatest living tragic actress.”

The last loves of the female Romeo

While on tour, she fell in love with Emma Crow, an 18-year-old actress and daughter of the politician Wayman Crow. She called Emma Crow her ‘little lover,’ and brought her back to Rome where she and the other Emma and Cushman all lived together. In another twist, Cushman introduced Emma Crow to her adopted son Ned and the two married several years later.

Cushman was diagnosed with breast cancer in 1869, and in 1871 decided to return to the United States. She built an elaborate mansion in Newport, Rhode Island. During the last six years of her life, she gave dramatic readings, which succeeded as much as her theater career had.

A year before she died, she went to Mount Auburn Cemetery in Cambridge, Massachusetts to choose her gravesite. She looked at lots and tombs in prominent positions throughout the cemetery. Finally, she said, “Haven’t you a lot for sale where one could obtain an unobstructed view of Boston?”

She found a spot near the highest point in the cemetery with a sweeping view of Boston and the widest part of the Charles River. She liked it so much she brought a group of friends to visit it and eat lunch.

Cushman died of pneumonia in her hotel room at the Parker House in Boston on Feb. 18, 1876, survived by Emma Stebbins, who died six years later.

World Pride 2023 will take place in Sydney, Australia. Here’s why that matters so much

Democrats are out-fundraising Republicans to take the Senate in 2020