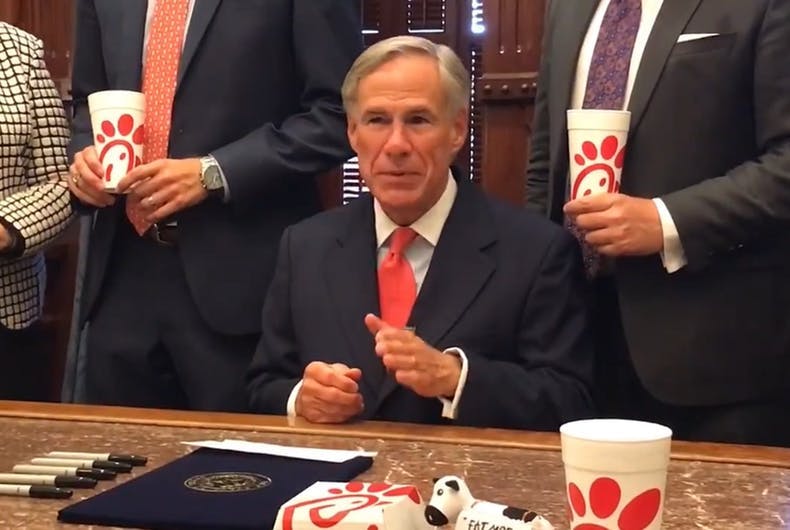 Texas Gov. Greg Abbott surrounded himself with fast food sandwiches to sign the "Save Chick-fil-A" bill into law.Photo: Twitter/Greg Abbott

Texas has repealed a policy that allowed social workers to refuse to work with LGBTQ people and people with disabilities.

In 2010 and 2012, the Texas State Board of Social Work Examiners (TSBSWE) passed protections that banned discrimination based on sexual orientation and gender identity.

Over the past two years, though, state Republicans have been pushing local governments and state agencies to repeal civil rights measures that go beyond state law, mainly attacking protections for LGBTQ people.

After the office of Gov. Greg Abbott (R) emailed the TBSWE recommending they end rules that ban discrimination based on sexual orientation, gender identity, or disability, the board voted unanimously to change their code of conduct to allow social workers to turn away LGBTQ and disabled people.

This led to national outcry and pressure from state lawmakers to put the protections back in place. State Sen. Jose Menendez (D) told the TBSWE to “fix the wrong that they’ve done.”

“No one should be discriminated against just because of who they are and who they love,” he said.

Gloria Canseco, the head of the council, said the TBSWE removing the protections was “perceived as hostile to the LGBTQ+ community or to disabled persons.”

“At every opportunity, our intent is to prohibit discrimination against any person for any reason,” she said.

Texas Democrats have said that passing anti-discrimination protections for LGBTQ people is a priority for 2021.

Here are 194 reasons why you should vote for Joe Biden