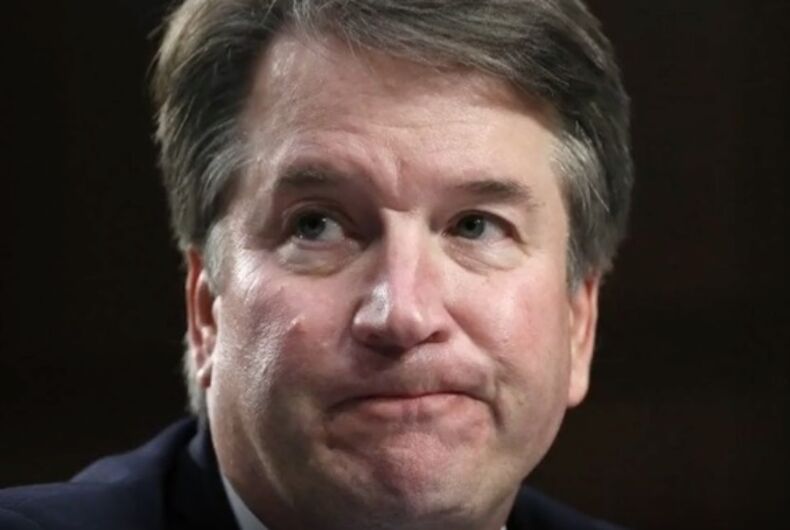 One of the hallmarks of this election cycle has been Donald Trump’s repeated efforts to delegitimize any result other than a landslide for him. The unprecedented and groundless attacks on the foundation of democracy are in keeping with Trump’s floundering attempts to save his sinking re-election choices.

Needless to say, there is an army of Republican lawyers at standby to help Trump in his quest to contest the results. The president’s team has hired dozens of attorneys and recruited thousands of volunteer lawyers and other poll watchers to challenge votes–that is, the votes of people who aren’t supporting him.

But the most important lawyers that Trump has aren’t the ones who will be arguing before the courts. They are the ones sitting on the bench, the judges that the president appointed. Nowhere is that truer than the Supreme Court.

Yesterday, the Supreme Court justices issued a chilling 5-3 ruling on voting that conveniently helps the president’s cause. The ruling upheld a lower court decision that held mail-in ballots in Wisconsin need to arrive by Election Day in order to be counted. The ballots were originally slated to be counted through November 9, as long as they were postmarked by Election Day.

Most disturbing of all was Justice Brett Kavanaugh’s opinion. Kavanaugh echoed Trump’s rhetoric, writing that “the chaos and suspicions of impropriety that can ensue if thousands of absentee ballots flow in after election day and potentially flip the results of an election.”

Of course, as Justice Elena Kagan noted in her dissent, the results aren’t flipped until all the votes are counted. Kavanaugh seems to think that when the networks call the election, that’s the official result.

In fact, states like Washington and Colorado have been voting entirely by mail for years, without any of the problems that Kavanaugh’s fearmongering would indicate. The idea that we have to know the final results by 11:59 pm on Election Night is a fable that Kavanaugh just made up.

In a sloppy defense of his argument, Kavanaugh notes that the IRS has an April 15 deadline, but Kavanaugh neglects to point out that if your tax return is postmarked by midnight that day, you’re fine. The IRS doesn’t declare your return illegal and reject it.

Kavanaugh’s opinion is hardly an outlier. Gorsuch sent a similar signal in the case. And just after the decision was handed down, Justice Clarence Thomas swore in Amy Coney Barrett, whom Trump explicitly supported in hopes of her ruling in his favor in an election dispute.

To show just how independent she views herself, Barrett attended a White House celebration yesterday, appearing with Trump on the White House balcony, even though the election is just a week away.

Barrett and Kavanaugh are just two of three justices who worked for Republicans in the 2000 election dispute. The third is Chief Justice John Roberts.

If a majority on the Supreme Court intervene yet again to hand the election to a Republican who lost the popular vote, they will destroy what little legitimacy the Court has left. But that probably doesn’t matter.

It’s not about legitimacy anymore. Voter suppression is now a key tenet of what it means to be a Republican.

The Court is the GOP’s best tool for ensuring the wishes of a Republican minority are inflicted on the majority of the populace. It’s certainly the tool Donald Trump is counting on using.