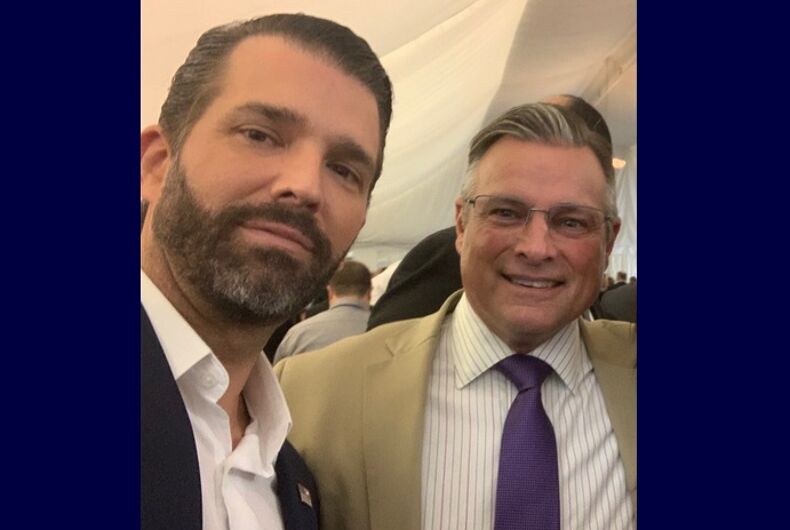 West Virginia Delegate John Mandt Jr. (R) resigned this past Saturday and suspended his campaign for reelection to the state legislature after anti-LGBTQ messages he sent to a Facebook chat group were leaked.

“Silly Faggot, Dicks are for chicks!!” Mandt allegedly wrote in the chat group “The Right Stuff,” which included conservative lawmakers in the state as well as candidates for office.

As screenshots of the messages were circulated on social media, Mandt denied making them in Facebook post on Saturday morning, saying he was “really hurt and very disappointed seeing fabricated posts circulating on social media.” That message has since been made private or deleted.

Later that same day, he had turned in a letter of resignation to West Virginia House Speaker Roger Hanshaw (R).

“I have enjoyed my time in public service and thank the people of the 16th District for the opportunity to represent them in the House,” Mandt said. “Right now, my focus and priority needs to be on my family and business, and feel it is best at this time to terminate my campaign and make room for other individuals to serve the state.”

Screenshots from the group only use first names and profile pictures to identify the participants. One of them was Jeffrey Ward, a candidate for city council in Huntington, and he confirmed the authenticity of the messages.

“At first this group spoke of issues in the community and occasionally had some locker-room humor,” Ward told the Huntington Herald-Dispatch, saying that he was personally invited to the group by Mandt. “However, the rhetoric from Delegate Mandt and several members shifted to personal attacks, sophomoric remarks and were not issue driven and were beneath the dignity of his office — as such, I left the group in March of this year.”

While Ward says that the messages were “beneath the dignity” of those in the group, screenshots show him asking if West Virginia Sen. Mitch Carmichael is “a homo.”

“probably Bi,” Mandt responded. “He can be a little feminine.”

Another person in the group said, “I don’t believe in bi, you either sleep with the same sex of [sic] you don’t.”

Mandt then brings up two other state Republicans and says that they are sponsoring a “queer bill.” It is not clear what bill he was referring to.

In a different exchange, Mandt informed the group that he removed someone named “Bri” from the group – possibly his daughter Briana –  who said she “lost a lot of gay friends bc of me.”

“I thought she was strong,” Mandt said of the person who was removed. “That’s youth for you. She’s tired of defending me.”

“When family turns on me,” he continued, “they aren’t family.”

Was going to go to bed. Saw something upsetting.

I know a lot of Catholics think that homophobia isnt real. I have to tell you it is. It's so real and it scares me

The "John" in these messages is John Mandt, a local state representative. This is what I see all around me. pic.twitter.com/s13tFSPMgr

“It hurts,” said Del. Cody Thompson (D), one of the two out members of the state legislature. “I work with these people.”

“In general I’m very proud of a lot of things we can work together on for the betterment of the people of West Virginia, but when it comes down to seeing these comments, it’s really hard to work with those who, they may smile to my face and talk to me, but behind closed doors or in conversations with others they use homophobic slurs.”

I very rarely call out a fellow member of the legislature in this way, but his homophobia needs called OUT. I offer Republican Delegate John Mandt – 16th Cabell to say these words to my face. I will wait. Say them! #homophobic #wvpol #Johnmandt #sayit #gayandproud 🏳️‍🌈👬👭 pic.twitter.com/KawoUg8jKJ

Donald Trump’s still in the hospital. The Vice Presidential debate is still on.