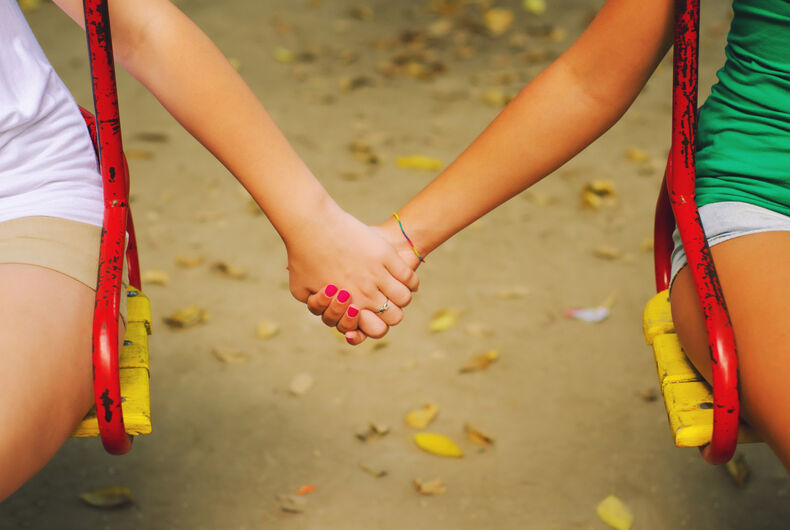 An Indiana mother has filed notice that she intends to sue the Greater Clark County School System after her daughter was allegedly repeatedly singled out and mocked because she’s a lesbian.

Charlestown resident Melissa Hart says in the lawsuit that her 17-year-old daughter has been harassed by administrators – and in a shocking revelation, mom was listening in on speakerphone as administrators accused the student and her girlfriend of having sex in a school bathroom and demanded they “get your shit and get your gay asses out of there.”

“It is time to stop brushing these issues under the rug,” Hart wrote in the complaint. “It is time for Greater Clark County Schools to take decisive action against homophobia and discrimination of any kind taking place within the walls of our schools. Additionally, Greater Clark must invest in comprehensive training for staff regarding how to compassionately deal with LGBT students.”

Hart seeks the termination of three employees, monetary damages, and a public apology.

She says the two girls have held hands at school “like normal teenagers” and one teacher, in particular, has “humiliated” her daughter with “inappropriate and derogatory comments.”

“You wouldn’t be late if you hadn’t been kissing and hugging on that girl,” the teacher told her daughter, she cites as an example, when the girl was a few minutes late to class.

When her daughter refused to return to the teacher’s classroom, the two girls skipped the class and hid in a bathroom. That’s when things got heated, Hart says.

She says in the paperwork that the scared teens called her after administrators found out they were skipping class and stood outside the door demanding the girls come out. The girls were eating cookies and watching TikTok videos, Hart claims.

Mom was listening in on speakerphone as administrators accused the student and her girlfriend of having sex in the bathroom and demanded they “Get your shit and get your gay asses out of there.”

She continued to quietly listen as the girls were taken to the office and interrogated about their relationship.

The questions made her daughter “feel uncomfortable and isolated as she was forced to answer questions about the fact she identifies as a lesbian,” Hart said in a letter emailed to the News & Tribune.

She says the two have also been previously singled out for holding hands. She claims to have asked why the two were being targeted.

“I told him, ‘She has rights, my daughter does have rights,'” Hart said she told the administrator. She alleges he responded by saying, “No ma’am, she doesn’t.”

“We take these allegations seriously,” Greater Clark Superintendent Mark Laughner the outlet. “We have opened an investigation. We cannot comment further on the details surrounding the allegations until the investigation is complete.”

“Greater Clark does not discriminate on the basis of race, color, national origin, sex (including transgender status, sexual orientation, and gender identity). We follow all federal and state laws concerning reports of discrimination. In addition, all staff complete mandatory anti-discrimination training.”