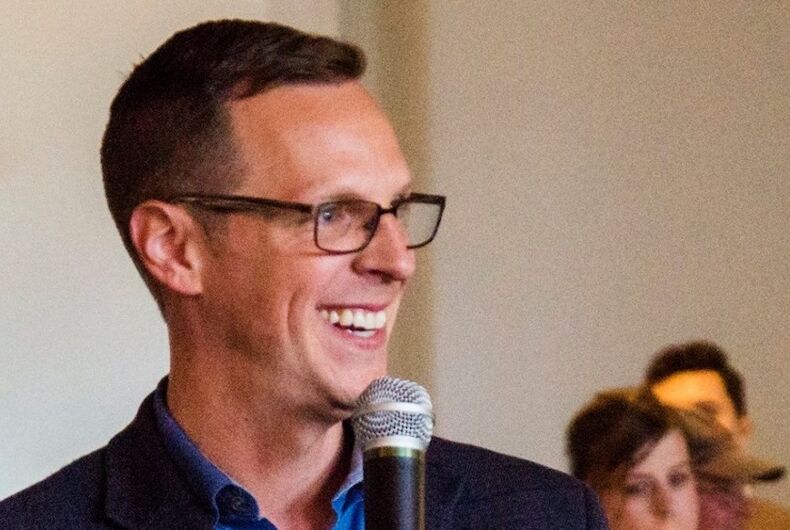 To reasonable voters, Jon Hoadley looks like an up-and-coming Democratic leader. At the age of 37, he has been working on progressive causes for more than 15 years and has been serving in the Michigan state legislature since his election in 2014. Last August, Hoadley won the Democratic primary to challenge incumbent Republican Rep. Fred Upton, who entered Congress during the Reagan administration.

What should be a standard issue race has become of the most viciously homophobic Congressional campaign in recent memory, thanks to the National Republican Congressional Committee (NRCC) and Upton.

The NRCC has slurred Hoadley as a “pedo sex poet.” Upton, who has a rating of 15 out of 100 from HRC, is running a $500,000 ad campaign that implies that Hoadley is a meth head. The fallout, says Hoadley, goes far beyond his own campaign.

“It hurts everyone in the LGBTQ community, not just in a campaign context,” he told LGBTQ Nation. “They’re leaning into these old stereotypes to justify trying to make people scared or fearful of LGBTQ folks.”

At issue are blog posts Hoadley wrote in his early 20s.

“It’s just innocuous day-to-day posts about my life as a young LGBTQ advocate,” Hoadley says. “It got to the point where I used it very infrequently and I forgot about it.”

Someone doing opposition research dug up the posts and leaked them to the Murdoch-owned New York Post, a favorite outlet for the right. The Post spun selected quotes in the most lurid way possible. The story’s headline – “Michigan Democratic rising star Rep. Jon Hoadley blogged about drug use and sex” – clearly suggested that Hoadley was writing about his own substance use.

Instead, says Hoadley, he wrote a post about going to a bar to learn about the fight against meth.

“I went to a meeting tht was talking about how to reduce crystal meth use in the LGBTQ community,” he recalls. “It was a Nancy Reagan ‘Just say no’ type of meeting. I ended the post with ‘Don’t do meth.'”

Upton’s ad specifically calls out the post, highlighting that the meeting took place in a leather bar, another unsubtle scare tactic.

In another post, Hoadley criticized the oversexualization of children, quoting a friend who complained about “a four year old wearing a thong.” Needless to say, the Republicans ignore the criticism in the post, instead suggesting that Hoadley has an unnatural fixation on children.

“The reality is as a state legislator, I have a strong track record fighting for children, fighting against human traffickling and standing up for survivors of domestic violence and sexual assault,” Hoadley points out.

Moreover, the pedophile smear plays directly – and no doubt consciously – into the QAnon conspiracy theory, which is increasingly a part of the GOP mainstream. QAnon followers believe that a vast array of leading figures in government and entertainment routinely engage in Satanic rituals that include harvesting blood from kidnapped children.

“By entertaining these QAnon conspiracy-like dog whistles, it demeans the conversation we need to have about addressing systemic issues we see impacting human trafficking and sexual violence,” says Hoadley.

What makes the smear more personal is that Hoadley is himself a survivor of sexual assault.

“I thought it was important that I tell folks that I myself am a survivor of sexual assault,” Hoadley says. “It is hard to provide grace to those folks who would use that tragedy to score cheap political points.  I think of fact that I had to call mother and tell her this story over phone so she would hear it from me first.”

Hoadley says that he has gotten support from voters “who have recognized that these type of smear campaigns are meant to distract and distory the truth.” He has been keeping his focus on campaign issues, particularly healthcare, where the difference between him and Upton is stark.

“He’s voted 12 times to take away coverage from people with pre-existing conditions” Hoadley notes of his opponent. “He voted against lowering prescription drug costs. That’s what voters want us to be talking about right now in a global health crisis. ”

The issue is also personal for Hoadley; his partner, Kris, was diagnosed with multiple sclerosis three years ago.

The district in which Hoadley is running is currently rated Lean Republican by the respected Cook Political Report.  However, the Republican party’s disarray in the wake of Donald Trump’s COVID diagnosis could play to Hoadley’s benefit.

“I think if Upton is going to be defeated it’s going to be part of a wave election,” Peter Wielhouwer, associate professor of political science and director of the Institute for Government and Politics at Western Michigan University, told MLive.com last August.

No matter the outcome, the GOP did send a strong message to future candidates: homophobia is a valid political strategy.

The latest 2020 trend is naked celebrities encouraging people to vote